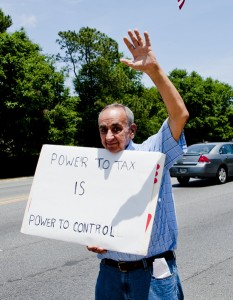 The Internal Revenue Service targeted conservative groups for “special treatment”—this we already know. But newly discovered details about the case show that the IRS’s assault is even more shocking.

Newly uncovered IRS documents [from 2011] show the agency flagged political groups based on the content of their literature, raising concerns specifically about "anti-Obama rhetoric," inflammatory language and "emotional" statements made by non-profits seeking tax-exempt status.

Why do tax agents care about whether an organization uses “anti-Obama rhetoric” (or “pro-Obama rhetoric” for that matter)? As Steve Simpson explains in “The Roots of the IRS Scandal” (TOS, Fall 2013), after the Supreme Court struck down parts of the campaign finance laws on the grounds that they violated the right of free speech, “supporters of campaign finance laws went apoplectic” and called for increased reporting of political activity.

The government had both the motive and the means to go after the loudest and most effective groups. The motive came from the premise underlying the campaign finance laws—the notion that influencing voters, elections, and candidates is bad, and anyone who does it well is worse. The means ultimately did not come from the campaign finance laws themselves, because the courts had struck down some of those laws, and the critics of campaign spending were unsuccessful in getting additional disclosure mandates passed. So critics turned to the IRS to “do something,” and, not surprisingly, it did. It investigated Tea Party groups for doing what everyone already thought was bad—spending too much money on political speech. It just did so under a different set of laws—the tax laws—and based on a slightly different rationale—that nonprofits get a special gift under the laws that they must pay for, either by avoiding political speech or by disclosing their donors.

To learn the details of what happened and why the case illustrates a major threat to free speech, see Simpson’s article.

Even though the IRS is currently on the defensive for targeting conservative groups, the laws under which it acted remain in effect. If we Americans want to protect our rights to freedom of speech, we must demand that our representatives work to overturn these laws and to get the government entirely out of the business of monitoring and restricting political speech.

View all articles by Ari Armstrong →
In Response to Navy Yard Massacre, Government Should Focus Exclusively on Protecting Rights“Social Justice” is an Assault on Justice
Return to Top