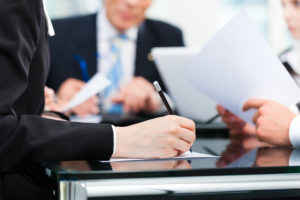 In 2005, in Kelo v. City of New London, the Supreme Court permitted cities to take land by force for the purpose of “economic development.” Now officials in Newark, New Jersey want to expand their use of eminent domain to seize mortgages in order to pressure lenders to the “negotiating table” and thus “help” homeowners with underwater mortgages receive a reduction in principal.

[T]he city would seize the mortgage—not the house. . . . Newark would not be the landlord, but would give or sell the mortgage to a third party, which would pay the lender fair market value [sic] and then issue a new mortgage based on the property’s true worth [sic].

If a bank rejects the fair-market offer [sic], then it’s left with nothing because the government has seized the mortgage.

Advocates are betting lenders would rather have pennies on the dollar than nothing, and this could be the stick that drives them to the negotiating table.

This “stick” is patent extortion.

But, according to its proponents, the (unnamed) extortion is justified because it serves an alleged “public good.” De Poto continues:

In Newark . . . home values have dropped an estimated $1.9 billion since 2008 as a result of foreclosures. When property values drop, so do tax revenues, resulting in . . . fewer police and firefighters on the streets.

According to the National Association of Realtors, a few other cities are considering the use of eminent domain to seize mortgages as well.

Will this new application pass court challenge? Given the history of eminent domain, it’s likely.

In his article “Deeper than Kelo: The Roots of the Property Rights Crisis,” Eric Daniels documents how the scope of eminent domain and the “public good” doctrine has steadily broadened since the U.S. Constitution initially permitted government to seize private property for “public use.” Today, concludes Daniels, “As long as the legislature proffered some altruistic rationale, any claim to the needs of society, the Court would override property rights”—to which we may now have to add “or contract rights.”

The proposed use of eminent domain to seize mortgages is an attack on the sanctity of contracts, a bedrock of rule of law and economic freedom. Whatever the legal outcome, this latest effort to expand its use highlights the open-ended danger of eminent domain and the need to end the rights-violating practice as such.