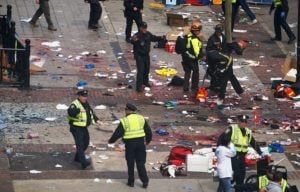 In what appears to be a desperate attempt to garner attention, Rolling Stone magazine featured a cover and article about the Boston Marathon bomber, Dzhokhar Tsarnaev. The cover depicted this Islamic terrorist as a doe-eyed sex symbol.

Seeking to mitigate backlash, Rolling Stone’s editors inserted the following text before the article: “Our hearts go out to the victims of the Boston Marathon bombing, and our thoughts are always with them and their families.” The article then proceeds to gush sympathetically over Tsarnaev, quoting friends who describe him as “a beautiful, tousle-haired boy with a gentle demeanor [and] soulful brown eyes“ and “‘just a normal American kid’ who liked soccer, hip-hop, [and] girls.”

But Rolling Stone can’t have it both ways. They can either have sympathy for a Muslim terrorist—or for his victims. The cover and the article make their choice clear.

Fortunately, some businesses such as CVS and Stop & Shop have taken a moral stand and refused to carry this issue in their stores. And the Facebook page “Boycott Rolling Stone Magazine for Their Latest Cover” has over 170,000 likes.

This cover should be the downfall of this filthy rag. Spread the word and help Rolling Stone to sink like a rock.

View all articles by Robert Begley →
Why the Obama Administration is Persecuting George ZimmermanCoal Keeps The Lights On—Thank You, Jimmy Rose
Return to Top