Why the Obama Administration is Persecuting George Zimmerman 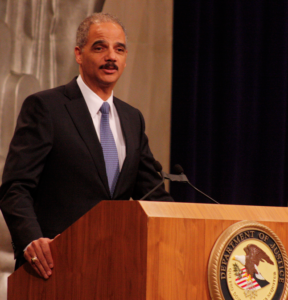 Despite George Zimmerman’s acquittal by a jury of all charges in the shooting death of Trayvon Martin—and despite the Fifth Amendment’s assurance that no person shall be “twice put in jeopardy” legally for the same offense—the Obama administration has decided to employ its political machinery to persecute Zimmerman.

“Florida authorities have delivered all evidence related to the George Zimmerman investigation to federal officials, who are weighing whether to pursue a civil rights case,” CNN reports.

Attorney General Eric Holder and the Department of Justice (DOJ) are pursuing this case despite the fact that Zimmerman was already tried and acquitted in the matter, and despite the fact that no significant evidence indicates the shooting was racially motivated. (Indeed, in 2011 Zimmerman protested the abuse of a black man, which strongly indicates that he was not racially motivated to harm blacks.)

Note that the question of whether Zimmerman was guilty of committing a crime is entirely separate from the question of whether he acted appropriately leading up to his confrontation with Martin. (I agree with with Paul Hsieh and Wayne Laugesen that Zimmerman needlessly provoked a confrontation with Martin even after the police asked him to stand down.)

The federal government's pursuit of Zimmerman is not about justice—that was already served in a Florida courtroom. What, then, is it about? It is about politics. Consider a few of the ways in which this is so:

Obama, Holder, and their underlings should quit playing national politics with what should be a local criminal matter. And the rest of America should heed the warning implied in Thomas Sowell’s comments about the case:

The only real heroes in this trial were the jurors. They showed that this is still America—at least for now—despite politicians who try to cheapen or corrupt the law, as if this were some banana republic.

View all articles by Ari Armstrong →
Freedom and Fracking Lead To Record Increase in U.S. Oil ProductionRolling Stone Should Sink Like a Rock for its Sympathy for Islamic Terrorist
Return to Top