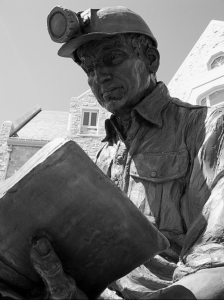 When Jimmy Rose performed part of his song “Coal Keeps the Lights On” on America’s Got Talent, he struck a chord with both the audience and the judges.

Rose’s lyrics depict a coal miner whose hard work shows in his calloused hands and whose rewards shows in the “sundress on [his] baby girl” and the “food on the spoon of [his] youngin’s mouth.” Coal production “keeps the bills paid” and his hometown thriving.

Politicians “went crazy in Washington,” the lyrics continue in the full version of the song, with policies and mine closures that “bleed us all dry.” Rose’s words are particularly poignant given Barack Obama’s “war on coal.”

Rose’s criticisms are on target. It is unjust and insane for politicians to penalize the coal industry, an industry that literally “keeps the lights on” across the world.

In 2012, consumption of coal grew faster than that of any other fossil fuel. In fact, coal provided the lion's share of total primary energy consumption: At 29.9 percent, it made the largest contribution to the world energy mix since 1970.

In Europe and western Asia, consumption of coal in 2012 increased by 2.7 percent, with Europe’s largest consumer, Germany, burning 3.9 percent more than it did the previous year. The French kept their lights on by burning 20.1 percent more coal.

In eastern Asia and the Pacific islands, consumption of coal increased by 4 percent, with China’s consumption up 6.1 percent and India’s up 9.9 percent. Japanese consumption increased 5.4 percent after the government closed nuclear power plants there following the 2011 earthquake and tsunami. Japan is expected to consume even more coal in 2013 as utilities switch from burning more-expensive oil to less-expensive coal.

Coal fueled the Industrial Revolution, during which life expectancies and standards of living increase dramatically over those of the energy- and technology-impoverished past. As Washington politicians look to gain political points by damning and restricting coal, coal nevertheless remains crucial to human life and prosperity.

Rose ends his song by noting that one of the things he is most proud of is that he was involved in the industry that “kept the lights on.” His pride is well-earned. And he and every person and company in the coal industry, past and present, deserve our thanks.