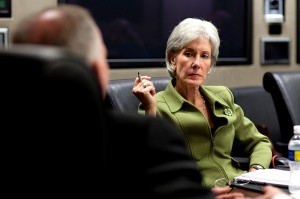 Sarah Murnaghan is a ten-year-old girl suffering from cystic fibrosis. If she does not get a lung transplant, she will die, likely within weeks. But so far she has been unable to receive a lung transplant because a federal agency—the Department of Health and Human Services (HHS)—has decided that children under twelve must be placed on the bottom of the waiting list for an adult lung, and because a child lung is highly unlikely to become available.

Why is the federal government involved in a matter of organ transplantation? As an HSS Web page explains, Congress passed the National Organ Transplant Act in 1984, creating the Organ Procurement and Transplantation Network (OPTN), an organization subject to HHS oversight.

Many are asking whether the secretary of HHS, Kathleen Sebelius, has legal authority to make an exception to the HHS-approved rules. Sarah’s family says that Sebelius has “very clear authority under the law to intervene and mandate a variance that would help save Sarah's life.” Congressman Tom Price says that Sebelius possibly could save Sarah’s life by “signing a paper” permitting her to join the adult transplant list. Sebelius, however, declined to intervene on the grounds that changing the rules for one person would be unfair to others on the transplant list. She has called on OPTN to review the transplant rules related to children, but any change would come too late for Sarah. It is not even clear that Sebelius could intervene in Sarah’s case if she wanted to, as Brett Norman writes for Politico. . . .