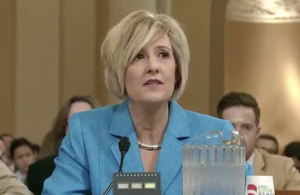 On June 4, Becky Gerritson, a founder of the Wetumpka Tea Party in Alabama, testified before congress about the IRS’s abusive practices toward Tea Party groups. Her poignant words deserve repeating.

Gerritson began by explaining what motivated her to become involved in the Tea Party movement:

In order to paint a clear picture, I need to explain how the Wetumpka Tea Party came into being. My husband and I had never been involved in politics before 2008. We’d always been patriotic and deeply proud of our country. We’ve always felt that the United States is the greatest country in the world. In September 2008, when we had our first $700 billion “bailout,” we along with millions of Americans were very concerned. That bailout was confirmation that our government was out of control. . . . We were worried, and we knew we had to do something to sound the alarm. . . . The government was mortgaging America’s future. And we knew that Washington wasn’t going to stop by itself.

Then Gerritson lambasted the government for discriminating against Tea Party groups:

In Wetumpka, we are patriotic Americans. We peacefully assemble. We petition our government. We exercise the right to free speech. And we don’t understand why the government tried to stop us. I am not here as a serf or vassal. I am not begging my lords for mercy. I’m a born free American woman, wife, mother and citizen. And I’m telling my government that you’ve forgotten your place. It’s not your responsibility to look out for my well-being, and to monitor my speech. It’s not your right to assert an agenda. Your post, the post that you occupy, exists to preserve American liberty. You’ve sworn to perform that duty. And you have faltered.

I would likely disagree with Gerritson on various issues. But, hearing these courageous words in defense of liberty, I can only thank Gerritson for speaking them to Congress—and urge Congress to listen.