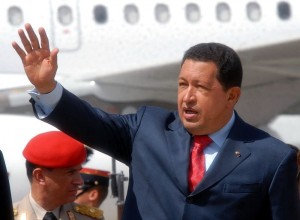 The authors point to to Venezuela, Bolivia, Cuba, and Ecuador, with Venezuela and Ecuador being the most prominent.

It is no secret that Venezuela and Iran enjoy a close relationship, with scores of Iranian companies establishing suspicious operations throughout the country.

What is less well-known is that Chavez has provided active support for Hezbollah by allowing it to establish a base of operations and provide terror training on Venezuelan territory. There is also ample evidence that the Chavez regime has facilitated cooperation between Hezbollah and Colombian and Mexican narco-traffickers.

Ecuador plans to begin mining uranium in the next few years and in late 2009, signed an agreement with Iran “to boost closer and mutually beneficial relations with the Islamic Republic of Iran on a variety of fronts, among them mining and geology.” The entire international community should clearly be concerned by the prospect of an Ecuador-Iran alliance cemented by a steady supply of uranium ore to Tehran.

Whether it is using drug cartel thugs from Mexico to plan a bombing in the heart of our nation's capital or reengaging with Argentina through diplomatic talks and developing ties with anti-American governments such as those of Bolivia, Cuba, Ecuador and Venezuela, it is clear that Iran has a strategy to increase influence in Latin America. The U.S. ignores this growing regional threat at its own risk.

It is time for the U.S. to wake up to the reality that some of its neighbors in the Western Hemisphere are actively cooperating and facilitating Iran's nuclear ambitions and terrorist activities.

The Iranian regime has killed U.S. troops in Iraq and Afghanistan, has long sponsored terrorist groups such as Hamas and Hezbollah, and continually calls for “Death to America.” From its inception, the Islamic Republic of Iran has been an enemy of the United States.

Venezuelan socialist dictator Chavez has consistently stepped up his anti-American activities, nationalizing (i.e., stealing) businesses created by Americans, all the while morally supporting those who have promised to kill American citizens. In addition, Chavez has made his country an outpost for anti-American agents and activities.

Both the Iranian Theocracy and the socialist regime headed by Chavez are rights-violating dictatorships actively engaged in efforts to harm American lives and property.

The United States should destroy the Iranian theocracy and then warn Chavez—and others who have cooperated with Iran in such matters—that if U.S. intelligence sees them involved in any further threats to America, they will be next.

View all articles by Joshua Lipana →
Glenn Reynolds and the K-12 ImplosionJoshua Lipana, His Doctors, and Modern Technology Beat Cancer
Return to Top