Glenn Reynolds and the K-12 Implosion 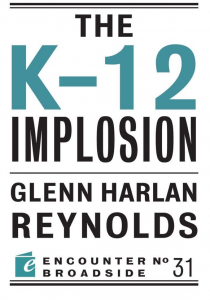 In The K-12 Implosion, Glenn Reynolds makes a commonsense argument that government-run schools are in a bubble—a bubble that is ready to pop.

He notes, for example, that the government has spent ever-increasing amounts of money on K-12 education but can show for it no positive returns, only negative ones—and many at that. افضل موقع العاب اون لاين He observes that near-bankrupt state and local governments cannot afford to do this forever. And, on these (and related) grounds, invoking Stein’s Law, he predicts that they won’t.

The book is short in length—just forty-eight pages—but not on substance. كازينو Reynolds addresses a wide range of issues from the invalid purpose of government-run schools to what a death spiral for them could look like, and he does so both clearly and calmly.

Unfortunately, despite the horrible record of government-run schools, Reynolds does not call for their abolition and the full privatization of education. He does not ask readers to wage war on the government-run school system. العاب مراهنات In this regard, he simply notes that more and more parents are taking their kids out of these war zones and saying why they’re doing so and what alternatives they’re opting for. . . .