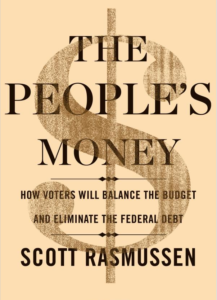 Although I do not always agree with Scott Rasmussen’s political proposals, the pollster’s understanding of American trends and attitudes is unparalleled. In his latest book, The People’s Money, Rasmussen reviews depressing facts about increasing government spending.

Since the 1950s, Rasmussen reports:

The proper goal of government is not to increase spending in proportion to population and inflation, but rather to protect individual rights. By that standard, government spending should be radically cut. Yet Rasmussen’s report highlights just how far out of control government has grown.

We who love liberty must redouble our efforts to limit government to its proper function.