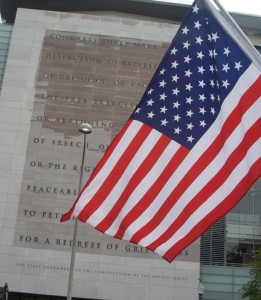 Under the pretense that so-called “super-PACs” would “drown out the voices of ordinary citizens,” President Obama “proposed the idea of a constitutional amendment to overturn the Supreme Court’s 2-year-old Citizens United decision . . . which paved the way for today’s unlimited political expenditures by political action committees.”

But Obama’s rationale is a straw man. No matter how much anyone spends on his own speech, no private citizen or institution can stifle anyone else’s voice. An “ordinary” individual can write letters to the editor, speak to friends and co-workers, attend town-hall meetings, start a blog, or participate in social media or online debate forums. He can pool his money with others to take out ads, or donate money to think tanks or PACs that advocate views he agrees with. Who could stop him?

Only the government, with its law-making powers, can “drown out” a person’s voice, and any attempt by government to legally restrict any person’s freedom to spend his own money for the purpose of advocating his viewpoint is an attack on everyone’s First Amendment rights. That’s what Obama’s proposed amendment is.

“[T]he no-holds barred flow of seven and eight figure checks . . . into super-PACs,” laments Obama, “fundamentally threaten[s] to overwhelm the political process over the long run.” Translation: “We politicians don’t like answering to our constituents, so we would love to insulate ourselves from the voices of the citizens we represent.”

Obama’s effort to stifle the voices of PACs and corporations is an assault on your and my right to freedom of speech. We should treat it as such.

View all articles by Michael A. LaFerrara →
Letter to the Editor
“You Didn’t Build That”—Elementary School EditionEastwood Reminds Us Whose Country This Is
Return to Top