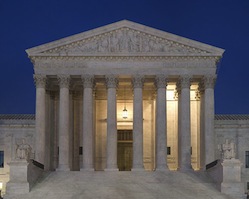 In response to the unexpectedly skeptical Supreme Court hearings on ObamaCare, an insolent President Obama declared that “overturning the law would amount to an ‘unprecedented, extraordinary step’ of judicial activism,” reports David Nakamura.

Obama questioned the authority of the nine-member panel of unelected justices to reverse legislation that was approved by a majority vote in Congress….

“[F]or years what we’ve heard is, the biggest problem on the bench was judicial activism or a lack of judicial restraint—that an unelected group of people would somehow overturn a duly constituted and passed law,” Obama said during a Rose Garden news conference. “Well, this is a good example.”

This extraordinary statement amounts to a repudiation of the separation of powers that is a hallmark of the American system of government. Apparently, Obama—at least while it suits his purposes—regards Congress as an imperial body possessing totalitarian powers to do as it pleases without restraint, by virtue of the fact that its elected members voted accordingly.

But this describes the congress of a democracy, not that of the constitutionally limited republic established by the Founders.

In the American system, the purpose of the Constitution is to protect the citizens from the government by restricting the government’s functions to those that protect and do not violate individuals’ rights—and the purpose of the Supreme Court is to judge the constitutionality of the government’s laws. Indeed, the justices of the Supreme Court are required to take an oath to “support and defend the Constitution of the United States against all enemies, foreign and domestic . . . [and] bear true faith and allegiance to the same.”

In addition to denying the Supreme Court its role in the American system, Obama expects the Court to ignore its mandate of impartiality. “There’s not only an economic element and a legal element, but a human element to this,” insists Obama, because “thirty million . . . Americans stand to benefit once the law is fully implemented by 2014.” But the Court is not supposed to concern itself with which groups benefit from which laws. Again, as a matter of oath, the justices are to “administer justice without respect to persons, and do equal right to the poor and to the rich”; they are not to dole out benefits to selected groups or individuals.

Obama’s rhetoric on this issue amounts to a declaration that one of the three branches of the federal government is irrelevant. Either Obama was an incompetent constitutional law professor, or he knows enough to understand that in order to establish a dictatorship, the system of checks and balances must go.

View all articles by Michael A. LaFerrara →
Letter to the Editor
Reason Ralliers Need the "How" of Reason-Based RightsUN Officer Lies on Twitter about Israeli Attack, Remains Employed
Return to Top