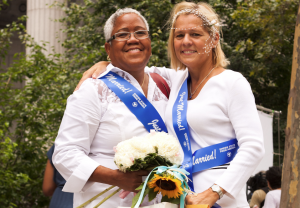 Although I have not read the entire decision and cannot vouch for all of its reasoning, the court’s description of the case in question illustrates why the ruling is a victory for gay couples in achieving equal legal protection—and for everyone concerned with such protection:

The State of New York recognizes the marriage of New York residents Edith Windsor and Thea Spyer, who wed in Ontario, Canada, in 2007. When Spyer died in 2009, she left her entire estate to Windsor. Windsor sought to claim the federal estate tax exemption for surviving spouses, but was barred from doing so by §3 of the federal Defense of Marriage Act (DOMA), which amended the Dictionary Act—a law providing rules of construction for over 1,000 federal laws and the whole realm of federal regulations—to define “marriage” and “spouse” as excluding same-sex partners. Windsor paid $363,053 in estate taxes and sought a refund, which the Internal Revenue Service denied.

Congratulations to Windsor, other gay couples, and everyone concerned with equal treatment under the law, for this victory.