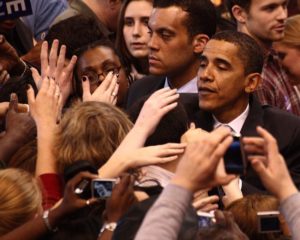 On May 5, President Obama delivered the commencement speech at Ohio State University. Invoking the Founders, he implored graduates to embrace the “quintessentially American value[s] of optimism; altruism; empathy; tolerance; a sense of community; a sense of service”—and to reject a “society that celebrates individual ambition above all else.” It is a “sense of civic duty,” according to Obama, the notion that “we are bound to one another,” that is at the heart of America. We have “rights,” he admits, “but with those rights come responsibilities—to ourselves, and to one another, and to future generations.”

But Obama’s message is the exact opposite of America’s founding ideals.

The fundamental principle of the United States is individual rights—the idea that each individual has an inalienable right to his life, liberty, the products of his efforts, the pursuit of his own happiness. There is no “but” about these rights; they are not conditional on service to others. So long as a person does not violate the rights of others, he is properly free to act in whatever ways he chooses.

The American spirit is not, as Obama would have us believe, about “civic duty” through which “we are bound to one another.” Rather, it is about individual rights and freedom from one another—freedom to act on our own judgment for our own goals and happiness regardless of what others need or want. The essence of America is not that the individual should selflessly serve the community (that’s the essence of North Korea). The essence of America is the radical, profoundly selfish idea that every individual is sovereign and must be free to live his life as he sees fit. . . .