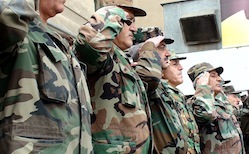 Fox News reports that “the Obama administration has sent a letter to UNESCO's executive board calling on Syria to be removed from the so called Committee on Conventions and Recommendations which deals with human rights.” But President Obama’s request is immorally inadequate. Consider just a few of the Syrian regime’s activities of late.

The Telegraph reports that  “Children appear to have been singled out for abuse, with some being tortured ‘to death’ in custody,” by the Syrian regime. The Syrian dictatorship recently murdered at least 256 children; its thugs recently gang-raped an eleven-year-old boy; and they recently shot a two-year old girl to stop her from “grow[ing] into a demonstrator."

The Guardian reports—citing an Amnesty International paper—that the Syrian regime has turned hospitals into “instruments of repression;” torturing and beating patients, while imprisoning doctors accused of aiding protesters. One patient, Ahmed, awoke from surgery surrounded by seven or eight thugs from the regime, a witness recounts, “He opened his eyes and said: ‘Where am I?’ They all suddenly jumped on him and started beating and hitting him . . .  [shouting] ‘You pig, you want freedom, eh?’”

Reuters citing the UN—the body that houses UNESCO—reports that “more than 5,000 people have been killed by the security forces since an anti-Assad revolt began in March [2011].”

The Syrian regime has been torturing people in hospitals, killing, raping and torturing children, and killing thousands of protesters who oppose the Syrian tyranny. These horrors alone—even aside from Syria’s alliance with the Iranian theocracy and their support of terrorist organizations such as Hezbollah—should have made any person or government shriek in horror in being associated with such evil.

That any civilized nation is a member of UNESCO is an outrageous sanction of this evil regime. The United States should not merely call for Syria to be removed from the Committee on Conventions and Recommendations; it should immediately remove itself from UNESCO, condemn all states that remain involved with it—and do the same with the tyrant’s haven known as the UN.