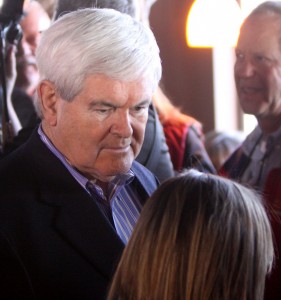 The spectacle of Newt Gingrich—of all people—trying to dictate the family planning of others is ludicrous.

Yet Gingrich’s recent call for more rules controlling in vitro fertility treatments raises an important issue: Under the proposed anti-abortion “personhood” laws that Gingrich endorses, common fertility treatments would be outlawed. The result would be that many women who wish to have children would be legally barred from getting pregnant.

“Personhood” laws would arbitrarily declare eggs at the moment of fertilization to be the legal equivalent of a born child, conferring full legal rights to zygotes. Among many other things, such laws would ban common fertility treatments that involve harvesting multiple eggs from the woman, trying to fertilize those eggs, and then implanting one or more of the resulting zygotes in the woman’s uterus. Because these procedures typically produce extra zygotes that are later destroyed, “personhood” laws declare them to be murder.

If doctors were forbidden from fertilizing more than a single egg at a time, that would dramatically increase the cost of fertility treatment and dramatically reduce the chances of success. As a result, many women who wish to have children would be legally prevented from doing so. (For details, see a 2010 paper on the subject by Diana Hsieh and me.)

Thus, “personhood” laws would violate the rights of women and their partners to seek fertility care as well as the rights of doctors to administer it—a violation of the founding rights to liberty and the pursuit of happiness.

And yet, even though they would prevent many women from having children of their own, the “personhood” laws are preposterously called “pro life” by their advocates. They are in fact profoundly anti-life, and it it time for Americans to recognize them as such.

View all articles by Ari Armstrong →
Letter to the Editor
The Grey: A Great Reminder of Crucial TruthsTexas Anti-Abortion Law Violates Rights to Liberty and Freedom of Speech
Return to Top