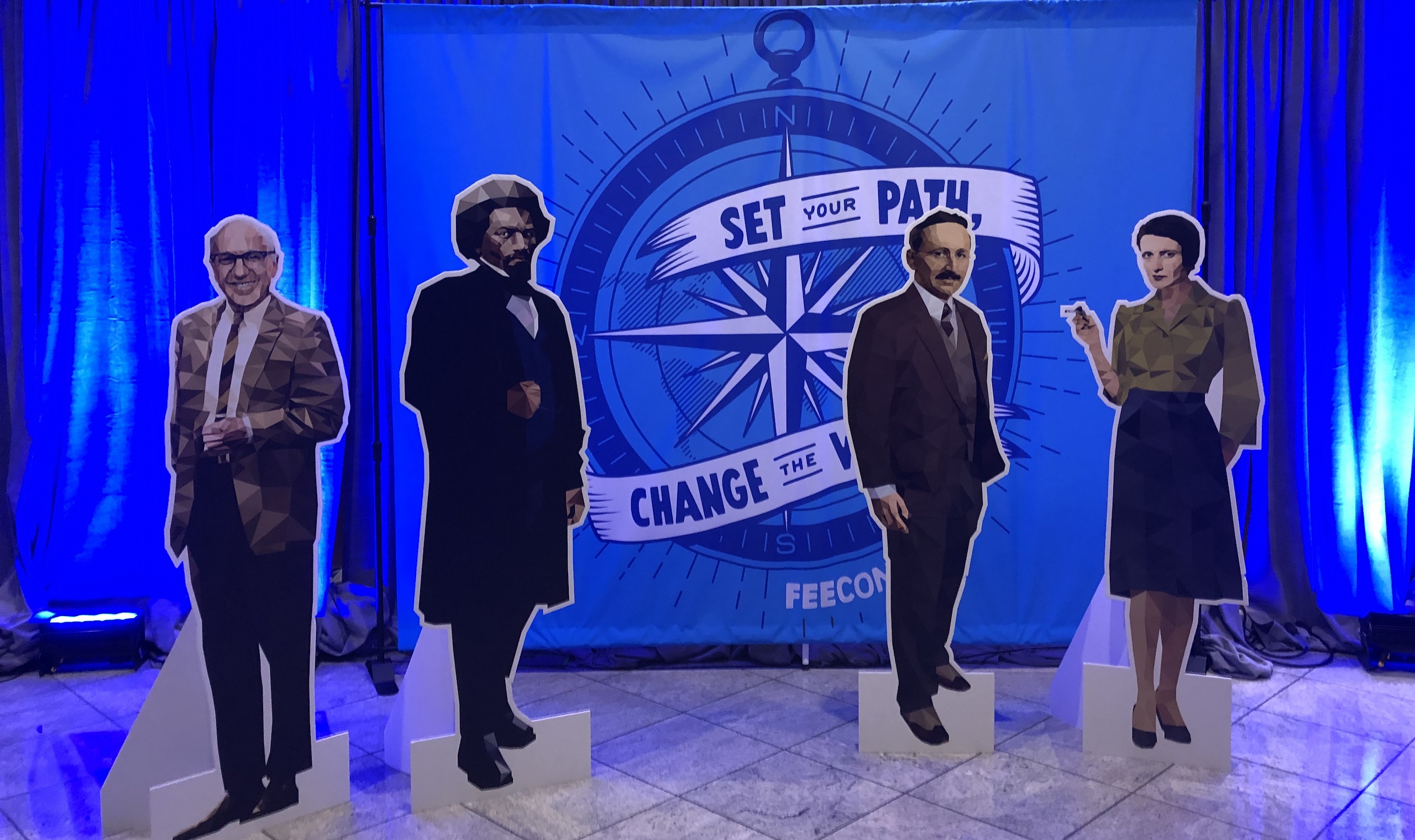 Most people want to live healthy, happy lives, but there’s no general consensus on how to go about doing so, and division is particularly prevalent in the realm of politics. In America, during the country’s first 150 years or so, most people held that achieving a good life required self-reliance—taking responsibility for one’s own life and respecting the rights of others to do the same. Many a man believed, as Emerson put it, that “The power which resides in him is new in nature, and none but he knows what that is which he can do, nor does he know until he has tried.”1 America was founded on the principle, enunciated and defended by John Locke, that the individual’s life is his own to live however he pleases—so long as he does not violate the rights of others to do the same.

But fast-forward, and we begin to see support for self-reliance and individual liberty replaced with the idea, as Jean-Jacques Rousseau put it, that “each citizen is nothing and can do nothing without the rest.” The majority, so long as it is a majority, may—by contrast—do anything with a man and his property: force him to purchase health insurance or provide it for others; to pay for other people’s retirement, for wasteful “green initiatives,” for “public lands,” for failing public schools; to do whatever the majority decides. Because this ideology enshrines the will of the majority, the group, the collective, it has become known as “collectivism.”

Advocates of liberty long have been on the defensive. Throughout the 20th century, collectivism spawned mass movements and a variety of regimes animated by the Marxist slogan “From each according to his ability, to each according to his need.” Even after many such regimes shed oceans of blood and collapsed of their own inability to support human life, “intellectuals” the world over have sung their praises; and today’s “social democrats,” led in America by the hugely popular Alexandria Ocasio-Cortez, continue to wave the banner of collectivism.

Among those responding to this threat today is the Foundation for Economic Education (FEE). The organization’s annual conference, FEEcon, provides a welcome reminder of the power of the individual. It integrates art, personal and professional development, and clear thinking about the connection between politics and human flourishing. I attended this year’s conference (held June 13–15 in Atlanta, Georgia) and walked away with renewed optimism in my belief that those fighting for liberty can and will make a powerful comeback.

It began on an unexpected note—actually, many notes—played by a small wind ensemble, conducted by the Grammy-nominated composer Austin Wintory. If, like me, you didn’t know that video games have become high art—that many modern games pack the wonder of romanticist painting with the drama of epic storytelling and the power of finely crafted musical scores—you’d have learned as much in the first minutes of the first “talk” of FEEcon 2019. Wintory’s gorgeous music was accompanied by a backdrop of movie-like scenes from a selection of the dazzling video games that he’s scored. After conducting these selections, Wintory introduced himself, discussed the self-propelled nature of his motivation, and pointed out the ways in which his self-interest harmonizes with that of his collaborators—those making the games, movies, and shows that he scores.

T. K. Coleman then picked up this leitmotif in his talk, “Set Your Path, Change the World,” wherein he elaborated this phrase, which was the conference’s theme. If your parents tell you to take out the trash, he asked, do you afterward visit all of your neighbors and offer to take out their trash as well? Of course not. Your impetus for taking out your own trash is likely based, at least in part, on a feeling of duty. But, he explained, those motivated by “duty” only ever do enough to check the boxes. They do just what’s required and then stop. “If you’re trying to do something good on a guilt-based approach, you’re done. You’ll never do anything great.” You set your path by doing what you love. And so long as you’re motivated by the love of what you do, you’ll have an impact—probably even change the world—without ever making that your intent.

Along with a firsthand approach to values, another theme surfaced among the few talks I attended: Those destroying liberty today cannot be dissuaded by economic arguments alone. They fight for rights-violating initiatives, such as Obamacare and the “Green New Deal,” not because they think they are practical or economically beneficial, but because they believe these things are moral—and only moral arguments can convince them otherwise. This, of course, is not news to fans of Ayn Rand, whose 1966 book Capitalism: The Unknown Ideal spotlighted the inability or unwillingness of supposed defenders of freedom and capitalism “to fight the battle where it had to be fought: on moral-philosophical grounds.”2 The book showed how “capitalism is not merely the ‘practical,’ but the only moral system in history.” But given the longstanding reticence (or inability) of many freedom fighters to make moral arguments, it’s invigorating to hear a forum devoted to economic education buzzing with emphasis on the importance of morality—including Rand’s morality of self-interest.

In fact, many older attendees told me how pleasantly surprised they were to see multiple organizations and speakers at FEEcon promoting Rand’s ideas. I presume they likewise were delighted when FEE’s new president (as of April 2019), Zilvinas Silenas, named Rand among his earliest influences.

No speaker could have followed National Geographic photographer Dewitt Jones; so, fittingly, his talk, titled “Extraordinary Visions,” was the last of the conference. It drew parallels between seeking a spellbinding shot at the end of a lens and creating a captivating and motivating vision for one’s own life. He told of being nineteen and hearing Robert Frost recite his poem “Two Tramps in Mudtime,” the ending lines of which run:

My object in living is to unite
My avocation and my vocation
As my two eyes make one in sight.
Only where love and need are one,
And the work is play for mortal stakes,
Is the deed ever really done . . .

Inspired by these words to unite his passion and profession, his mind whirred through that night and the next day until he hit upon a way to integrate the two. It required disappointing his father, choosing to attend film school in California rather than accept the spot he’d been offered at Harvard Business School. Not long after, in his early twenties, he wrote to National Geographic executives about an idea he still was far from having the skills to implement. Rejected after a meeting and a screening of what was his first-ever short film, he summoned the courage to write to the company’s president—and his audacity paid off.

He found himself in front of National Geographic’s director of photography. Between long stretches of silence in which he continued scribbling at the project in front of him, the director said two things that profoundly impacted Jones’s development. The first was: “You got hired to work for us, so that means you’re good. You don’t have to prove yourself.” He realized that Jones felt the need to prove himself, and that this comparative and secondhanded concern could only distract him from doing great work. Jones immediately felt as if a stone had been lifted from his chest.

After several more minutes of silence in which the director continued to work as if alone in his office, he looked up a second time and, continuing his earlier thought, said, “But every day, you had better improve yourself.” Jones made these his guiding principles. His first project for National Geographic was a success, and it launched the career he’s had since.

The only words that could do justice to Jones’s beautiful talk are his own. I believe it was recorded, and FEE may release it in the future. Fortunately for those anxious to absorb his wisdom, Jones gave a similar though shorter talk for TEDx, which you can watch below.

The level of intelligence and passion for ideas demonstrated by so many FEEcon speakers and attendees has me very optimistic about the future of the liberty movement, and I’m already looking forward to FEEcon 2020. In the meantime, if you’re interested in freedom and flourishing, consider joining me and a host of excellent speakers, musicians, and artists for TOS-Con 2019, happening August 7–10 in Park City, Utah. Let’s keep the momentum going.

The intelligence, passion for ideas, and interest in moral foundations demonstrated by #FEEcon speakers and attendees give lovers of liberty reason for optimism.
Click To Tweet

View all articles by Jon Hersey →
Letter to the Editor
TOS-Con 48-Hour Sale for Adults—Satisfaction Guaranteed!The Argument from Intimidation: A Confession of Intellectual Impotence