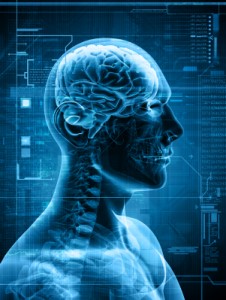 A promising new medical device for detecting electromagnetic disturbances in the brain can rapidly screen patients for intracranial swelling or bleeding. The medical journal PLOS ONE depicts the helmet-like apparatus as a safe, portable, and relatively inexpensive tool to determine whether patients require further imaging with CT (computed tomography) or MRI (magnetic resonance imaging).

Credit for this invention goes to Boris Rubinsky, a professor in the department of mechanical engineering at UC Berkeley, and Cesar Gonzalez, a professor at the Instituto Politécnico Nacional, Escuela Superior de Medicina in Mexico, who have collaborated for several years.

The technology is known as “Volumetric Electromagnetic Phase Shift Spectroscopy” or “VEPS,” and the device is brilliantly simple. It is essentially two coils that are placed around the head; the “inductor coil” produces an electromagnetic field, which is detected by the second “sensor coil.” When the conductivity of the brain tissue is at a normal level, the device signals a healthy brain. When the conductivity of the tissue varies from the normal level, whether due to swelling (edema) or bleeding (hematoma), the device indicates the problem.

Among the values and potential values of this tool, ruling out pathology could greatly reduce unnecessary CT scans and thus reduce medical costs and radiation exposure. (The device itself emits negligible radiation.) In countries and regions with limited access to CT and MRI, improved triage and earlier diagnosis could save many lives.

An initial pilot study with the device was small, and larger samples are necessary to establish the full accuracy of the device. But the technology is already clearly promising.

Kudos to the researchers and businessmen responsible for conceiving and developing this remarkable technology.

View all articles by Daniel Burritt →
Letter to the Editor
Government Has No Business in Broadband BusinessFrom the Editor, Summer 2013
Return to Top