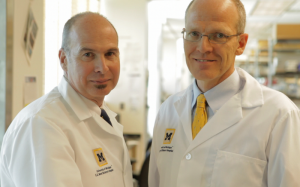 It is a parent’s nightmare: Your infant has severe breathing problems—intermittently ceasing to breathe and then breathing again—and there seems to be no way to fix the problem. This was a horror that April and Bryan Gionfriddo faced when their six-week-old son, Kaiba, temporarily quit breathing due to a collapsed bronchus and thereafter had daily problems breathing. As his mother recounts, “Quite a few doctors said he had a good chance of not leaving the hospital alive.”

Two doctors said otherwise. Using a 3D printer, Glenn Green and Scott Hollister of the University of Michigan created a tracheal splint made of biologically compatible plastic. “The splint was sewn around Kaiba’s airway to expand the bronchus and give it a skeleton to aid proper growth.”

Green said, “It was amazing. As soon as the splint was put in, the lungs started going up and down for the first time and we knew he was going to be OK.”

Congratulations not only to Green, Hollister, and their team, but also to the engineers who developed the 3D technology. Their devotion to science and use of reason saved Kaiba’s life, and their achievement portends of more great advances in the future.

View all articles by Ari Armstrong →
Letter to the Editor
There Is No Right to Religious Proselytizing in U.S. MilitaryZach Sobiech, Victim of Cancer, Lover of Life
Return to Top