Washington’s Spending Problem and Other Matters: TOS’s Week in Review for April 28

Noteworthy news and views from the week ending April 28, 2012

The Institute for Humane Studies has published a series of short videos on free-market economics (and other subjects) at LearnLiberty.org. The latest is titled, “Does Government Have a Revenue or Spending Problem?”

The narrator of the video, economist Antony Davies, explains that, “Adjusted for inflation and population growth, tax revenue today is three times what it was in the 1950s. This suggests that the government does not have a revenue problem,” but rather a spending problem. 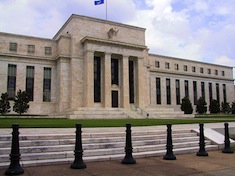 It’s good to see more people and organizations identifying the fact that the government’s financial problems pertain not to revenue but to spending. Even that identification, however, will not enable Americans to put government on the right track—unless Americans also challenge the moral premise underlying the alleged need for massive government spending. For an examination of that premise and how its widespread acceptance necessitates ever more spending, see “Altruism: The Moral Root of the Financial Crisis,” by Richard Salsman.

America Deploys its Most Advanced Fighter Jets Near Iran

The U.S. military has deployed several F-22s, the nation's most advanced fighter jets, to an allied base less than 200 miles from Iran. The Air Force strongly denies this deployment is meant as a show of force against Iran or that it is in some way related to a potential strike on Iran's nuclear facilities. . . .

The F-22 has not yet seen combat. The jets were not used in Iraq, Afghanistan or Libya. They are stealth, and they specialize in air-to-air combat, but can also strike air-to-ground if needed. As one Air Force official put it, "this is America's premier fighter jet. It has no rival."

Although it is unlikely that the Obama administration will use these jets (or any other military equipment) against the Iranian regime, it’s better to have them nearby than not, in case the administration or some future one decides to think and thus realizes that the U.S. government has a moral and constitutional responsibility to eliminate such enemies.

For a discussion of why and how the U.S. government should end the Iranian regime, see “'No Substitute for Victory': The Defeat of Islamic Totalitarianism" by John David Lewis.

Kimberly Strassel writes for the Wall Street Journal that President Obama has “targeted insurers, oil firms and Wall Street—letting it be known that those who oppose his policies might face political or legislative retribution.” My first reaction was, “Unbelievable!” My second reaction was that, with this administration, the story is as believable as it is outrageous. “Hope and Change” and all that.

Judges Should Actively Uphold the Constitution

Measuring a federal statute like ObamaCare against the Constitution and finding it wanting is not judicial activism. This, as Chief Justice John Marshall noted in the early (1803) and much-quoted Marbury v. Madison case, "is of the very essence of judicial duty."

Those who accuse justices of “judicial activism” usually do so because the justices have ruled against the accuser’s preferred policy. But, of course, the primary job of Supreme Court justices is to evaluate legislation in light of the highest law of the land, the U.S. Constitution, and to act accordingly. Insofar as “judicial activism” refers to this process, it deserves our highest praise, as the alternative is dereliction of judicial responsibility.

As historian C. Bradley Thompson recently argued, Marxism “begins with theft and it ends with murder.” This well-established historical fact nevertheless came as a surprise to Oh Kil-nam, a South Korean who studied Marxist “economics” in Germany and embraced the creed. As the BBC reports, Oh defected to North Korea in 1985, taking his wife and two daughters with him. After Oh and his family witnessed the brutality of the North Korean regime first-hand, Oh escaped. Alone. The North Koreans had sent his family to a concentration camp: “Oh did not die but nor has he ever heard from his wife and daughters again. He does not know whether they are alive or whether they died in the prison camp.”

Californians used to love their state so much that they embraced as a kind of de facto state song the Eagle’s “Hotel California,” with its line, “You can check-out any time you like, but you can never leave.” That was then. In recent years, California’s government has become so rights-violating that many citizens are packing up and moving. Allysia Finley writes for the Wall Street Journal: “[T]he Golden State's fastest-growing entity is government and its biggest product is red tape. . . . Californians are increasingly pursuing happiness elsewhere.”

At least Californians are still free to leave. And to take their families with them.