Greek Crisis Deepens—TOS’s Week in Review for May 19 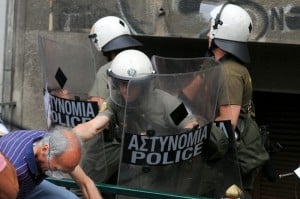 Noteworthy news and views from the week ending May 19, 2012

Greece Cracks—Is the Eurozone falling apart? The New York Times reports increased tension “between Berlin and Athens in the unfolding crisis over Greece’s membership in the euro.” MSNBC reports that Greeks “withdrew at least 700 million euros” on Monday alone, signaling fear about the nation’s economic future.

Meanwhile, an Iranian rapper is in hiding after two clerics called for his death, and an Iranian cartoonist got lashed for daring to caricature a politician.

Meanwhile, Steve Horwitz points out that Paul Krugman, in using JP Morgan’s financial loss as a pretext to call for more banking regulations, fundamentally misrepresents the history of American banking and the role of federal laws in crippling the banking system.

Unfortunately, and shockingly, Arnold Kling, writing for the presumed pro-liberty Mercatus Center, advocates forcibly “breaking up the big banks” and setting “limits on the asset size of individual banks.” Kling’s proposal would constitute a far worse violation of rights than anything Krugman has proposed in this context. With “friends” like these . . .

Scapegoating Saverin—Both leftists and conservatives have expressed outrage that Eduardo Saverin, co-founder of Facebook, dared to renounce his U.S. citizenship to avoid onerous taxes. The entrepreneur may be barred from reentering the United States, TPM reports.

Senator Chuck Schumer has called for a new law to “impose a mandatory 30 percent tax on the capital gains of anybody who renounces their U.S. citizenship,” ABC reports. Maybe next Schumer and company can build a wall to keep people from escaping.

Thankfully, Harsanyi offers commentary both sensible and just: “If high taxation chases successful people out of the country, that’s the country’s fault.”

Fracking Hypocrites—Vermont banned hydraulic fracturing (“fracking”), today’s most innovative and productive method of energy production. The state, which doesn’t actually have any reserves worth fracking, imports 8.4 billion cubic feet of fracked natural gas annually from Canada, notes David Biederman for the Center for Industrial Progress. Living by one’s standards is so difficult when one’s standards are anti-life.

Shovel-Ready Jobs Program—“The vast majority of money we spend in job training doesn't go to job training, it goes to employ people in those job training federal programs,” Senator Tom Coburn told Fox News. Who could have guessed such mindless waste is possible to federal politicians and bureaucrats?

Abort, Abort—SpaceX, a private company (which unfortunately has received “nearly $400 million in taxpayer funds”) aborted its launch, which was intended to send supplies to the International Space Station.

Leaving China—Finally! Chinese activist “Chen Guangcheng and his family are en route to the United States so he can pursue studies at an American university.” We welcome Chen with high hopes that he might encourage Americans to reconnect with our country’s founding principles.

Thank You Vets—Today is Armed Forces Day. Cheers to the veterans who have defended America from foreign aggressors and barbarians.