Santorum “Throws Up” on Separation of Church and State 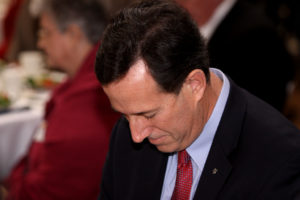 Presidential hopeful Rick Santorum condemned the principle of the separation of church and state, as the Boston Globe reports. Last fall Santorum said that he “almost threw up” after reading John F. Kennedy’s 1960 speech endorsing the principle.

On Sunday, Santorum elaborated in an interview with ABC’s “This Week”:

I don't believe in an America where the separation of church and state is absolute. The idea that the church can have no influence or no involvement in the operation of the state is absolutely antithetical to the objectives and vision of our country. . . .

Santorum’s use of the phrase “public square” illegitimately packages together two totally different ideas (thus committing the fallacy that Ayn Rand termed package-dealing). In his usage, that phrase simultaneously means “in government policy” and “in public places.” But bringing religion into government policy and recognizing people’s right to hold and discuss religious views in public places are two completely different things. One is forbidden by the separation of church and state—and by the Constitution—and the other is not. For a man running for the presidency of the United States, this distinction should be elementary. But, then, if that man seeks to impose his religion on others, he may find this distinction convenient to ignore.

The separation of church and state does not mean that religious people cannot publicly express their views or run for political office. Nor does it mean that the government may not exercise authority over churches under any circumstances. Properly understood, the separation of church and state means that the government must consistently protect people’s freedom to think, believe, or worship as they see fit—while at the same time protecting people’s rights to remain free from forcible interference by religious zealots, organizations, and mandates.

For example, while the government should not dictate which “god” a person worships—or whether he worships a god—the government certainly should intervene to stop religious groups from performing human sacrifices, mutilating children’s genitalia, hanging homosexuals, torturing “heretics,” or holding people against their will. While the government should not stop people from expressing religious views, it should stop people from forcibly imposing those views on others.

Those who, like Santorum, distort the meaning of the separation of church and state open the door to all manner of infringements on religious liberty, and other violations of individual rights. And that, of course, is their goal.