Fear Not “Satan” but Santorum 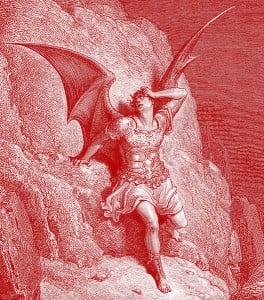 What are we to make of a presidential candidate, a man seeking the most powerful position in the world—a position that grants him the ability to sign bills into U.S. law and that places his fingers on U.S. nuclear launch codes—who thinks the problems of our nation are caused by . . . “Satan”?

Unfortunately, this is not a B-grade horror movie gone wrong; it is the presidential campaign of Rick Santorum. Recently Santorum’s 2008 speech at Ave Maria University, a speech in which he argues that Satan is attacking America, has been reviewed by Gateway Pundit, Media Research Center TV, and other publications.

Here is part of what Santorum said about America’s alleged demonic possession:

This is a spiritual war. . . . The Father of Lies, Satan, [has] his sights on a good, decent, powerful, influential country. . . . And Satan has done so by attacking the great institutions of America, using those great vices of pride, vanity, and sensuality. . . . The place where he was, in my mind, the most successful and first successful was in academia. He understood pride of smart people. He attacked them at their weakest, that they were in fact smarter than everybody else, and could come up with something new and different, pursue new truths, deny the existence of truth, play with it, because we’re smart.

Santorum is here attacking not the subjectivist or nihilistic trends in parts of academia, but intelligence and the pursuit of truth as such. He apparently sees no difference between the efforts and discoveries of Galileo, Newton, Darwin, Einstein, and today’s “smart people” who “come up with something different and new,” and those who absurdly “deny the existence of truth.”

To Santorum, intelligence is a manifestation of the “vice” of pride. In Santorum’s way of “thinking,” there is no difference between legitimate pride in one’s discovery of objectively demonstrable truths (e.g., the theory of evolution or that of relativity) and the “pride” of, say, Richard Rorty, who denied the possibility of truth, or the vanity of John Rawls, who “proved” that no one deserves the fruits of his success.

To Santorum, these all are equally the “vice” of pride because they are claims to intelligence—which Santorum imagines arising from a supernatural demon talking in people’s ears.

Santorum’s comments do point to a crucial issue, the fundamental choice faced by all people: to think or not, to use one’s mind or not, to discover the nature of the world around us or not, to pursue intelligence or not. The “or not” alternative, in Santorum’s view, is the right alternative. Don’t think; have faith. Don’t read Darwin; read the Bible. Don’t look to the stars; look to Jesus. One path enables us to discover objective truths, pursue science, and live lives of reason and prosperity; the other subjects us to baseless fears of unnatural forces working beyond our understanding and leads to squalor.