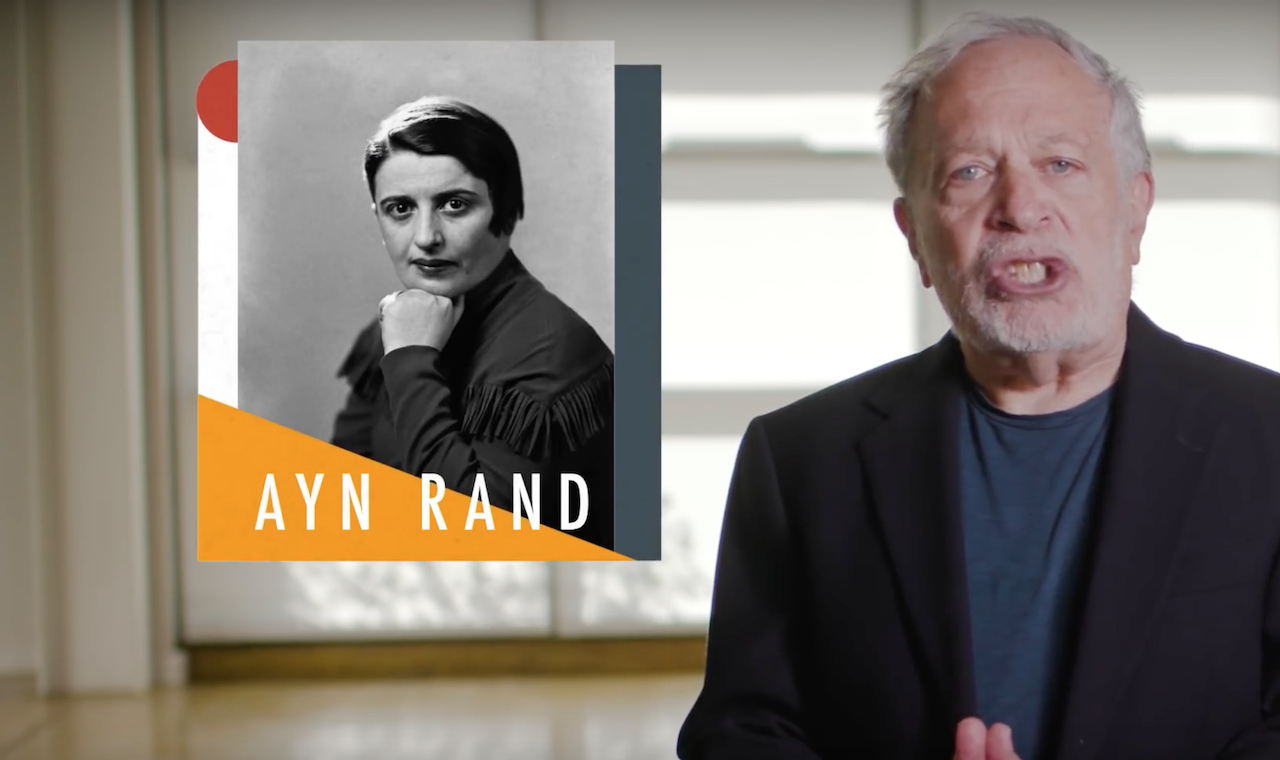 Ayn Rand and her philosophy of Objectivism have changed the world for the better. Thirty-six years after her death, Rand’s novels and nonfiction works have sold in the tens of millions, and they continue to sell, teach, and inspire. Nevertheless, various “intellectuals” and journalists seek to discredit Rand’s ideas and to vilify her character by erecting straw men and cutting them down.

One recent example is ex-Labor Secretary Robert Reich’s video “Trump’s Brand is Ayn Rand.” Apparently hoping to promote his 2018 book The Common Good, Reich attacks Rand’s philosophy in favor of what he calls our “shared values.” Judging by Reich’s patent distortions and straw men, honesty isn’t among his values. But Reich’s attack is worth examining, as it so clearly illustrates the methods of the left.

Reich first attempts to link Rand’s philosophy to individuals who are generally held in low regard (deservedly or not) by his fellow leftists. Most of the figures Reich mentions are people who claim to admire a specific aspect of Rand’s thought but who clearly do not understand or embrace her philosophy.

For example, although Speaker of the House Paul Ryan has occasionally quoted Rand favorably, he explicitly disavowed her philosophy when he was running for vice president on the Romney-Ryan ticket, stating that claims of his adherence to Rand’s philosophy are an “urban legend.” “If somebody is going to try to paste a person’s view on epistemology to me, then give me Thomas Aquinas,” said Ryan in a 2012 National Review interview. “Don’t give me Ayn Rand.”1

Reich rails against “bankers who defraud customers and investors,” and he pretends that they do so with Rand’s blessing. Yet Rand’s conception of individual rights explicitly forbids fraud and all forms of coercion, both direct and indirect. Tellingly, Reich doesn’t mention BB&T’s John Allison, the Fortune 500 banker who instilled the Objectivist virtues of honesty, integrity, and justice in his business and thus enabled his bank to avoid the calamitous investments that led to the 2008 Great Recession. Instead of trying to “get rich quick” while evading the long-term consequences, Allison recognized that offering home loans that are bad for his customers is also bad for his bank’s bottom line.

When Reich highlights irrelevant facts, omits relevant facts, and pretends that a philosopher advocated ideas she explicitly opposed, he’s clearly not engaging in honest argument. Yet this is his MO.

Reich goes on to misrepresent Rand’s conception of the virtue of selfishness and the evil of altruism. He doesn’t argue against any representation of Rand’s philosophy that she would recognize. He instead derides what he calls “this contempt for the public, this win-at-any-cost mentality [that] is eroding American life.” Reich then proceeds to claim that Rand argued for the law of the jungle, “where only the strongest, cleverest, and most unscrupulous get ahead, and where everyone must be wary in order to survive.”

This isn’t Rand’s philosophy. One cannot divine the law of the jungle from a philosophy that explicitly upholds reason, rejects human sacrifice, eschews the initiation of violence, promotes free trade in all realms, and has its central literary heroes swear that they will “never live for the sake of another man, nor ask another man to live for mine.”

But so invested is Reich in the so-called morality of the “common good” that the mere thought of someone unwilling to subordinate or sacrifice his life and happiness for others is an outrage.

The extent of Reich’s understanding of Rand’s philosophy can be seen in the fact that he regards The Fountainhead as a book about “an architect so upset that a housing project he designed didn’t meet specifications [that] he had it dynamited.” One envisions a crestfallen Reich fuming at the novel’s conclusion, which depicts a triumphant hero ascending his great skyscraper. “But Roark destroyed a housing project that was for the common good!”

Reich’s entire straw man argument presupposes and depends on the collectivist view that the “common good” is supreme and that the individual must sacrifice on behalf of the group. He makes no argument for this position. He simply assumes that he can count on his viewers’ acceptance of it. Well, Rand set forth a comprehensive, observation-based, logical argument against this notion and in support of the principle that the individual is the basic unit of moral concern and that he has a right to live for his own sake. Reich ignores all of this.

In addition to equating the “common good” with the good, Reich equates self-interest with villainy. There’s no difference in his view between a rights-violating Bernie Madoff type and an honest, productive man who trades value for value by mutual consent to mutual advantage, such as Jeff Bezos. To Reich, individuals intent on pursuing and achieving their life goals—the Howard Roarks of our world—must submit and serve the collective, and anyone who takes inspiration from them must be discredited and broken. Ayn Rand thought otherwise.

Reich’s video is a smear intended to discredit Rand’s ideas by misrepresenting them and attacking the misrepresentations. There’s nothing new here. His fellow leftist, Whittaker Chambers, beat him to this sixty years ago with his infamous “review” of Atlas Shrugged, claiming absurdly that Ayn Rand advocated gassing people of lesser ability.

Reich’s video and similar smears, however, have a silver lining. Although many people who hear straw man attacks against Rand’s ideas will absorb the claims with little or no thought, such people are not likely, in any event, to accept a philosophy that extols independent thinking. They were and remain in Reich’s collectivist camp. Other people, however—those who insist on judging a philosopher’s ideas for themselves—will hear Reich’s screed and wonder: Does Rand really advocate backstabbing, fraud, extortion, and the like? If so, why do so many respectable people who have read her works advocate her ideas? Perhaps I should read them myself and see what Rand herself says.

When such people read Rand’s works, they encounter a spotlight illuminating the conflict between villains who enshrine mysticism, altruism, collectivism, and governmental coercion for the “public good” and heroes who uphold reason, self-interest, individualism, and a government that protects the rights of all individuals by banning coercion from human relationships. Readers of Rand’s works also learn that people who have applied Rand’s philosophy to their own lives are all the richer for it—both materially and spiritually.

Not all readers will see Rand’s ideas for what they are. But some will. The thinkers will. And they are the motor of the world—and the hope for a better tomorrow.

View all articles by Nicholas Provenzo →
Letter to the Editor
Free Speech, Property, and the Right to DiscriminateLive Interview on Achieving Financial Freedom, with David Veksler