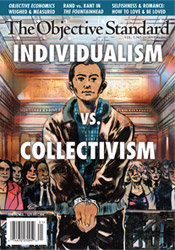 The online edition of the Spring issue of TOS has been posted to our website; the print edition will be mailed in the first week of April; and the e-book and audio versions will be accessible to subscribers beginning March 25 and 30 respectively.

The contents of the Spring issue are:

“Individualism vs. Collectivism: Our Future, Our Choice”
Craig Biddle
Surveys the metaphysics, epistemology, ethics, and politics of these two creeds, showing, at each level, that only one of them corresponds to observable reality.

“Objectivism vs. Kantianism in The Fountainhead”
Andrew Bernstein
Examines these opposing philosophies in the story, characters, and theme of Ayn Rand’s great novel.

Eames: The Architect and the Painter, directed by Jason Cohn and Bill Jersey
Reviewed by Earl Parson

The Closing of the Muslim Mind: How Intellectual Suicide Created the Modern Islamist Crisis by Robert R. Reilly
Reviewed by Burgess Laughlin

The 7 Principles of Zionism: A Values-Based Approach to Israel Advocacy by Dan Illouz
Reviewed by Gideon Reich

Treason: Liberal Treachery from the Cold War to the War on Terrorism by Ann Coulter
Reviewed by Joshua Lipana

Your Brain at Work: Strategies for Overcoming Distraction, Regaining Focus, and Working Smarter All Day Long by David Rock
Reviewed by Daniel Wahl

The Killer of Little Shepherds: A True Crime Story and the Birth of Forensic Science by Douglas Starr
Reviewed by Daniel Wahl

If I Die in the Service of Science: The Dramatic Stories of Medical Scientists Who Experimented on Themselves by Jon Franklin and John Sutherland, MD
Reviewed by Daniel Wahl

If you’ve not yet subscribed to TOS, you can do so online or by calling 800-423-6151. The journal also makes a great gift for your active-minded friends and relatives. Subscriptions start at just $29 and are available in Print, Online, E-book, and Audio editions, so you can enjoy the articles as you see fit.

Also, be sure to visit TOS Blog—the source for daily commentary from an Objectivist perspective.