Operation Mincemeat: How a Dead Man and a Bizarre Plan Fooled the Nazis and Assured an Allied Victory, by Ben Macintyre. New York: Crown, 2010. 416 pp. $25.99 (hardcover). 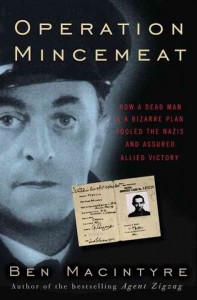 In 1943, on the coast of Andalusia in southwest Spain, a dead man “washed ashore wearing a fake uniform and the underwear of a dead Oxford don, with a love letter from a girl he had never known pressed to his long-dead heart” (pp. 323–24). It was near the high point of the Third Reich’s reign, with Europe effectively under Nazi control; but, owing in part to this dead man, Hitler’s days were numbered.

Ben Macintyre tells the story of this fantastic ruse in Operation Mincemeat: How a Dead Man and a Bizarre Plan Fooled the Nazis and Assured an Allied Victory. The book may read like fiction, but remarkably, the story is completely true.

It begins during World War II when the Nazi war machine “was at last beginning to stutter and misfire.”

The British Eighth Army under Montgomery had vanquished Rommel’s invincible Afrika Korps at El Alamein. The Allied invasion of Morocco and Tunisia had fatally weakened Germany’s grip, and with the liberation of Tunis, the Allies would control the coast of North Africa, its ports and airfields, from Casablanca to Alexandria. The time had come to lay siege to Hitler’s Fortress [across Europe]. But where?

Sicily was the logical place from which to deliver the gut punch into what Churchill famously called the soft “underbelly of the Axis.” The island at the toe of Italy’s boot commanded the channel linking the two sides of the Mediterranean, just eighty miles from the Tunisian coast. . . . The British in Malta and Allied convoys had been pummeled by Luftwaffe bombers taking off from the island, and . . . “no major operation could be launched, maintained, or supplied until the enemy airfields and other bases in Sicily had been obliterated so as to allow free passage through the Mediterranean.”

An invasion of Sicily would open the road to Rome . . . allow for preparations to invade France, and perhaps knock a tottering Italy out of the war. . . . [Thus]: Sicily would be the target, the precursor to the invasion of mainland Europe. (pp. 36–37)

There was a major problem, however. Macintyre points out that the strategic importance of Sicily was as clear to the Nazis as it was to the Allies and that, if the Nazis were prepared for it, an invasion would be a bloodbath. So how could the Allies catch their enemy off guard?

The solution was to launch what Macintyre calls one of the most extraordinary deception operations ever attempted. The British Secret Service would take a dead man and plant on him fake documents that suggested that the Allies were planning to bomb Sicily only as an initial feint preceding an attack on Nazi forces in Greece and Sardinia. They would then float their man near the Spanish coastline, making it appear as though he drowned at sea, and hope that one of the many Nazi spies in Spain discovered him and the documents and passed their content along to his superiors—convincing them to weaken Sicily by moving forces to Greece and Sardinia. . . .

View all articles by Daniel Wahl →
Home
Return to Top