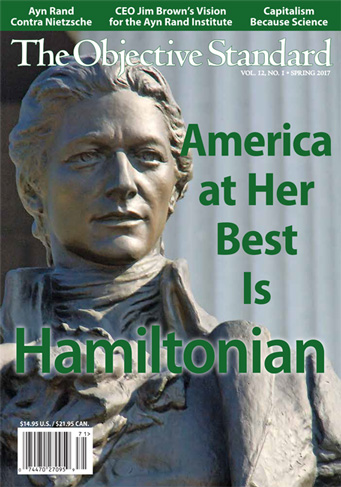 Welcome to the Spring 2017 issue of The Objective Standard.

This issue begins our twelfth year of publication and marks a new era in the Objectivist movement. In my interview with Jim Brown, the new CEO of the Ayn Rand Institute, he lays out his vision for the organization, which includes his goal of “building a healthy and cohesive Objectivist community.” Here’s a taste, but you’ll want to read the whole thing:

By “community,” I mean a group of people bound by common values—values experienced not only intellectually, but also psychologically, emotionally, and existentially. We Objectivists have so much to offer each other and the world. We want to create a culture of reason and freedom, and we can be much more effective toward that end if we work together and spread these vital ideas in unison. I’d like to see Objectivists develop the same affinity toward each other that people in my hometown feel toward each other—an attitude of general goodwill and cooperation. If we can do this, then I think more people, especially young people, will feel more interested in crossing over from today’s dominant culture of skepticism and collectivism into our burgeoning community of reason and individualism. . . .

I want ARI to take the lead in this regard. I think this is a huge opportunity for us.

Our biggest challenge, in my view, comes from a certain lack of perspective among some, and perhaps many, Objectivists. We all know our movement has been riven by disputes and conflicts for decades. Some of these involve genuinely profound philosophical differences that are irreconcilable, and such differences lead to necessary divisions. But many disputes are based on personal or nonphilosophical conflicts that should have been managed and resolved but instead were allowed to become malignant.

Unnecessary conflicts, especially among Objectivist intellectuals, are more than just distractions. They kill momentum, dampen confidence, and sap morale. They undermine collaborations and associations that otherwise would have helped to expand Objectivism’s influence. Here is where the lack of perspective comes in.

Compared to the great task before us, most of these disputes are penny change. How can we let them divide us when there is so much at stake? “Look at the world,” as Ayn Rand used to say. We cannot afford to allow personal quarrels to morph into lethal conflicts. Objectivists will never be, and should never be, tolerant of blatant irrationality or genuine immorality. But we need to understand the importance of emphasizing common ground and collaborating more whenever we can. We don’t have to be close friends with everyone in the movement, but we do need to learn to recognize and work with good people who share our general goals and values.

Most personality conflicts can be managed. That is what’s done in successful business organizations every day, all across the globe, and we need to learn the process. There is a lot more to say about this, but I think you will see us do more to promote a sense of community among Objectivists—and it will start within the walls of the Ayn Rand Institute.

That’s called rationality. And it’s infectious—in the sense that anyone who chooses to think can contract it. Read the whole wonderful interview and share it widely. We’ve made it accessible to everyone for free.

As to the other items in this exciting issue, the cover article, “America at Her Best Is Hamiltonian” by Richard M. Salsman, is packed with widely unknown information about the great American founder and George Washington’s top aide, Alexander Hamilton. Read this essay carefully and be sure to check out the endnotes and citations if you’re interested in digging deeper into the data. I think you’ll gain immense respect for Hamilton along the way.

Next, in “Ayn Rand Contra Nietzsche,” John Ridpath addresses various claims to the effect that Rand’s philosophy is somehow an offshoot of Friedrich Nietzsche’s philosophy. Ridpath systematically compares their philosophies in every branch of the science, from metaphysics to ethics to aesthetics, leaving no room for anyone to persist in asserting that “Rand was a Nietzschean” or anything of the sort. This act of justice was a long time coming. And it is most welcome.

In the final installment of his three-part essay, “The Greeks and America’s Founding Fathers, Part 3: The Two Freedoms,” Timothy Sandefur examines two conflicting conceptions of liberty held by various Western intellectuals and cultures in the long trek toward the individual rights-based ideal held by classical liberals and the like today. The road to the modern conception of liberty was neither straight nor simple, and Sandefur highlights some of the critical curves and complexities that are easy to overlook, yet crucial to understanding how freedom developed conceptually and existentially across time. The essay also closes with one of the most beautiful scenes ever painted with words. Have a tissue handy.

Next up, in “Capitalism Because Science,” I examine the respective natures of capitalism and statism (i.e., socialism, fascism, theocracy, etc.) in the light of several sciences—including economics, psychology, biology, and epistemology—showing that capitalism is the only social system supported by science.

Books reviewed in this issue are Seeing Central Park: The Unofficial Guide to the World’s Greatest Urban Park, by Sara Cedar Miller (reviewed by Joseph Kellard); and Extortion: How Politicians Extract Your Money, Buy Votes, and Line Their Own Pockets, by Peter Schweizer (reviewed by Michael Dahlen).

Finally, our section From TOS Blog includes “Regressive Leftists Promote Milo Yiannopoulos by Attacking Free Speech,” by Roderick Fitts; as well as “Why Treat Yourself to Something Special on Randsday?”; “Netanyahu Reads Nothing Less than Victory”; “Jim Brown Is the New CEO of the Ayn Rand Institute”; and “National Review’s MO Regarding Ayn Rand”—all four by me.

If you’ve not yet subscribed to the quarterly, or if you need to renew your subscription, check out our new options, including our Digital subscription, which combines the website, ebook, and audio editions into a single, all-digital package. (Click on “Subscribe” in the menu bar of our website for details.)

I hope you enjoy the new issue, and I wish you a spring of great spiritual and material growth. —Craig Biddle