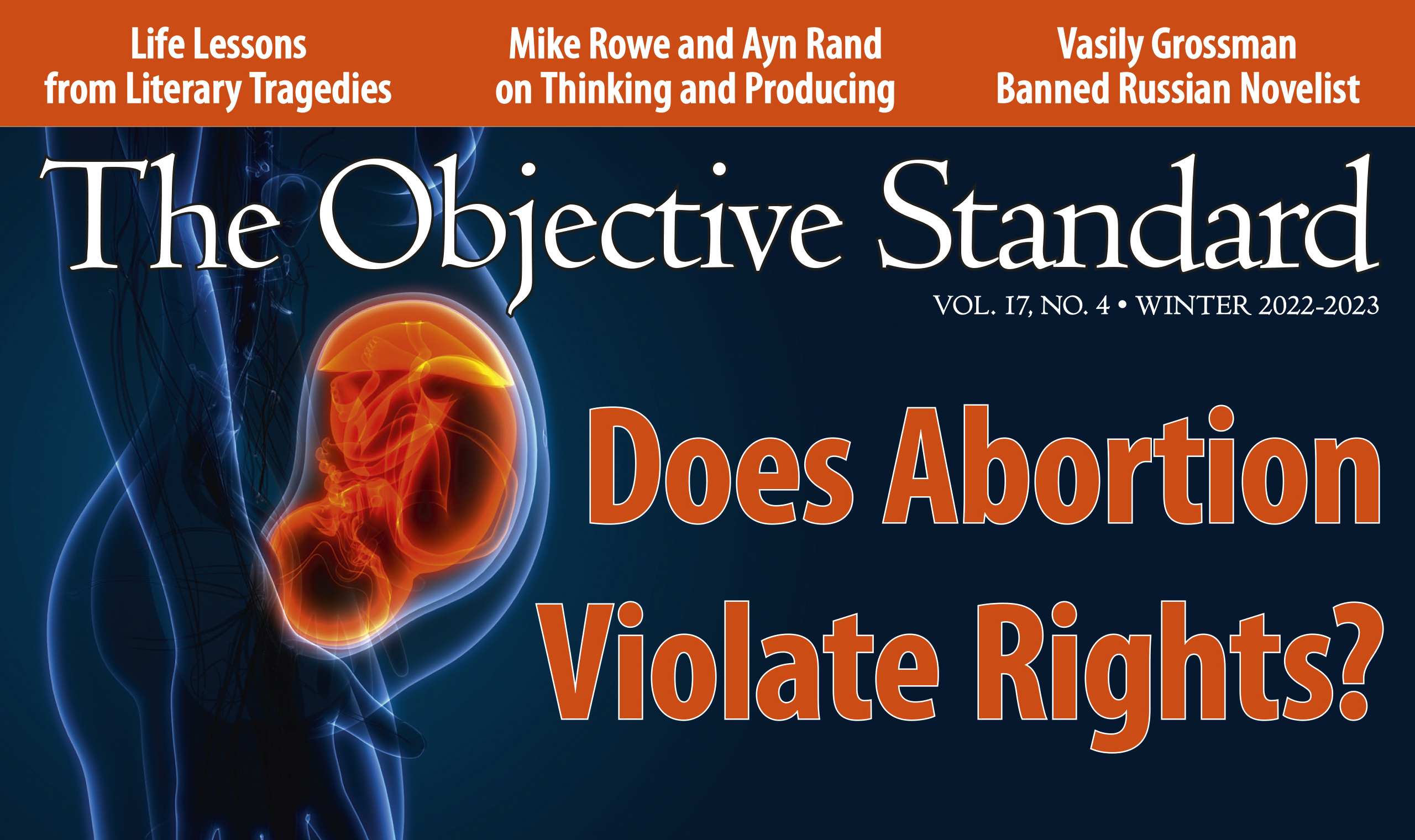 Welcome to the Winter 2022 issue of The Objective Standard, which rounds out the journal’s seventeenth year providing conceptual clarity on the basis of rational philosophy.

One of the most rewarding aspects of editing this journal is seeing young intellectuals grow, and that’s particularly so in the case of Angelica Walker-Werth, author of this issue’s cover article on abortion. Commentators and decision makers on all sides of the abortion debate misconstrue what rights are and where they come from, then cite these misunderstandings in defense of their positions. In “Does Abortion Violate Rights?,” Walker-Werth unpacks some of the most influential of these arguments, shows where they go wrong, and answers many pressing moral questions about abortion.

Next up, in “Mike Rowe and Ayn Rand on the Virtues of Thinking and Producing,” Carrie-Ann Biondi shows the similar ideas that led Rowe and Rand to spotlight hardworking heroes. Shortly after the article was published online in late September, Rowe responded by writing:

Thirty-five years ago, a librarian in Baltimore County handed me a novel the size of a telephone book and told me to read it. It took me two weeks, and it kept me up for more than a few nights, but when I finally finished Atlas Shrugged, I knew I had read an important book. I also knew, in the years that followed, that many of the decisions I made in life were impacted by the characters that Ayn Rand had created, and the philosophies they espoused. What I didn’t know, and would have never dared to imagine, was that three and a half decades later, a noted expert on Ayn Rand would devote a few thousand words and a considerable amount of research comparing the underlying themes of Dirty Jobs with those of Atlas Shrugged. . . .

I guess what I feel after discovering this in my newsfeed and reading every word, twice, is a weird mix of delight and gratitude. I’m grateful to the librarian in Baltimore, whose name I don’t even remember, for handing me a book that would inform a lot of what I’ve come to believe is true and good about human nature. And I’m delighted—profoundly delighted—to see the underlying themes of Dirty Jobs, Somebody’s Gotta Do It, and the mikeroweWORKS Foundation, compared and contrasted with two of the most important books ever published. It’s always gratifying when someone looks beyond the dad jokes and the potty humor to examine the real reasons these shows are still on the air.

Big thanks to Carrie Ann-Biondi for taking the time to research such a thoughtful piece, and for making my Saturday morning an unmitigated delight. Guess it’s time to re-read The Fountainhead.

The article is a delight. And another was seeing Rowe’s praise for it and “two of the most important books ever published” go out to his six million Facebook followers. Even if only a few pick up Atlas or The Fountainhead and are inspired by them to do great things, as Rowe was, the world will be a significantly better place.

Speaking of rereading The Fountainhead, Andrew Bernstein takes a unique look at it and four other great works of literature—Oedipus the King, Othello, Macbeth, and Hamlet—in the next article, “Life Lessons from Literary Tragedies.” He walks us through each story, examining tragic characters and identifying principles for avoiding their fates. “Oscar Wilde once remarked that life imitates art,” he writes. “Studying tragedies of great literature can help us ensure that our lives do not imitate such art.” Which character is most tragic, and why? Read the article to find out.

Another tragic character, though for reasons largely outside his control, was Vasily Grossman. Like Ayn Rand, he was born in 1905, lived under Soviet oppression, and became a famed novelist and critic of statism. Unlike Rand, though, Grossman (born in Berdichev, Ukraine) never escaped Soviet tyranny. Most of his works were marred by the many-thousand edits of Soviet censors. Ironically—as Timothy Sandefur explains in “The Life and Fate of Vasily Grossman, Banned Russian Novelist”—his last and most outspoken work, Life and Fate, “became his greatest novel, precisely because the KGB confiscated the manuscript from Grossman’s apartment in 1960 and banned it outright, thereby sparing it the official mutilation” that his other books endured. Thanks to scholars Robert and Elizabeth Chandler for translating and, in many cases, reconstructing Grossman’s works, and to Sandefur for bringing to light Grossman’s story—“a tragedy worthy of his own novelistic skills.”

Next, in “Elihu Palmer’s Journey from Religion to Reason,” Thomas Walker-Werth profiles a thoughtful heretic of the American Revolutionary era. Palmer was among the minority of 18th-century thinkers who not only rejected mystical religion but sought to replace it with a fully rational philosophy. That’s a laudable goal, one that many today could still benefit from adopting.

This is especially true in countries governed by Islam, such as Iran. The irrationalities of that faith recently led Iranian “morality” police to murder the twenty-two-year-old Mahsa Amini for the crime of allowing a lock of hair to escape her hijab. This set off protests in Iran and across the globe. In “Iranian Freedom Fighters and the Winds of Reason,” I examine how the spread of rational culture has once again put Iran at a crossroads between “faith, force, and the vast desert of ignorance that has so long swallowed the potential of the Persian people—or reason, freedom, and, perhaps, a second golden age in the Middle East.”

Then, in “Why I Changed My Mind on Abortion,” I retrace the steps that led me from thinking, in early adulthood, that abortion was immoral and should be illegal, to a polar opposite view today.

We wrap up our features with “Six Wistful Winter Poems,” including gems from Sara Teasdale, Eliza Cook, Henry Wadsworth Longfellow, and more. I hope they brighten your holiday season.

I hope you enjoy the issue. From all of us here at The Objective Standard, have a wonderful holiday season!

Welcome to the Winter 2022 issue of The Objective Standard, packed with articles building on the foundation of rational philosophy identified by #AynRand.
Click To Tweet

View all articles by Jon Hersey →
Letter to the Editor
In Memory of Joseph Henry Kroeger, 1937–2022Objective Standard Institute’s Terrific 2022
Return to Top