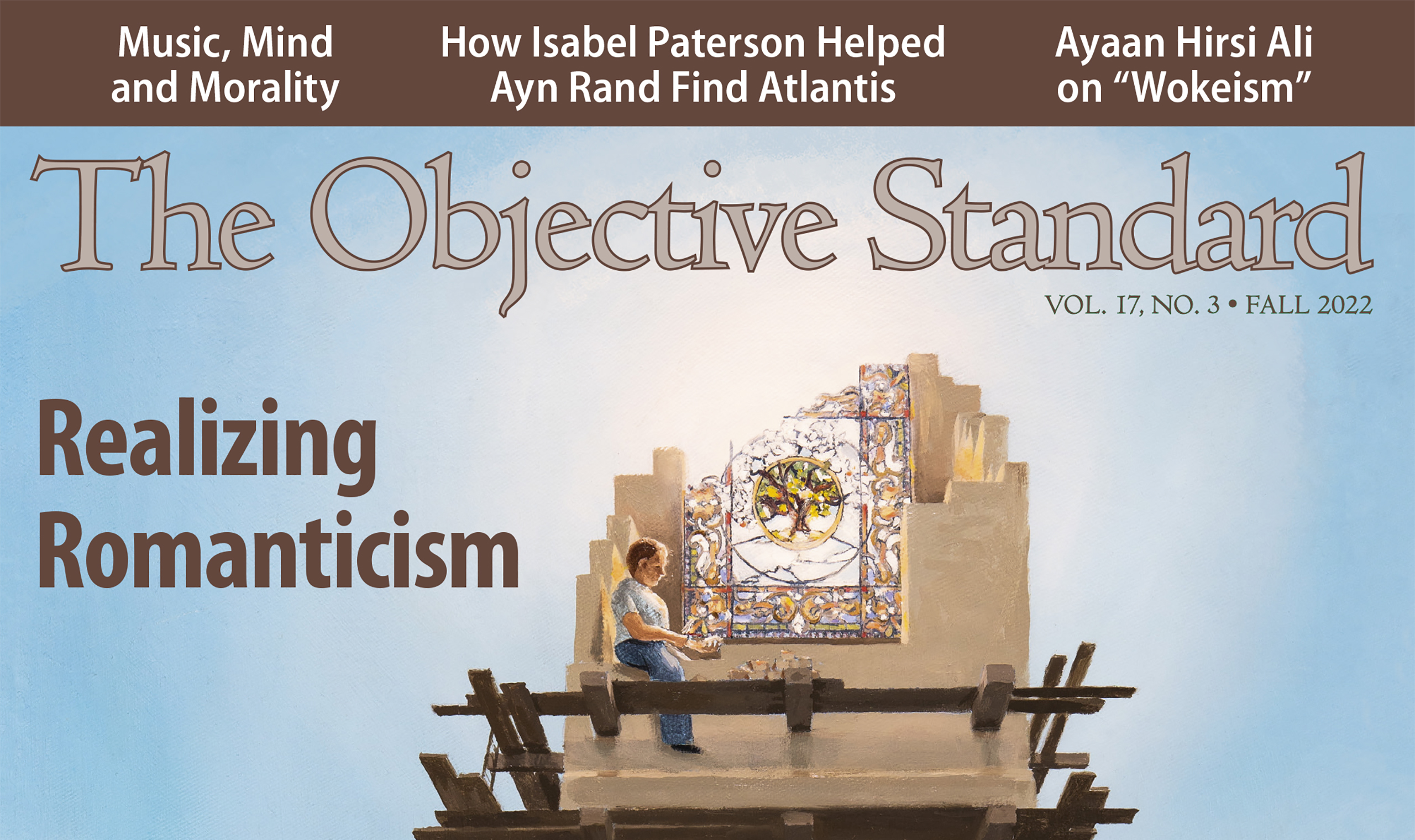 Welcome to the Fall 2022 issue of The Objective Standard, packed with articles building on the foundation of rational philosophy identified by Ayn Rand.

That’s also the subject of the stunning painting adorning the cover. I first saw this work, “Building a New Philosophy” by Jon Wos, through moist eyes while listening to his life story at TOS-Con 2022 in Denver (held by our sister organization Objective Standard Institute). Wos was born with osteogenesis imperfecta, a rare disorder that manifests in short stature and brittle bones. He suffered upward of ten fractures merely from the process of being born. As he matured, art became his means of dealing with the psychological fallout of his condition—and of overcoming it. In “Realizing Romanticism,” Wos reveals the ideas and experiences that led him to the lowest of lows—and those that brought him out the other side. So, grab some tissues and settle in for an inspiring journey, illustrated in full color with Wos’s paintings, drawings, glass sculptures, and more. (If you like what you see and would like to see it a whole lot more often, visit Cordair.com to commission Wos or purchase one of his available works.)

Next is Timothy Sandefur’s eye-opening story, “How Isabel Paterson Helped Ayn Rand Find Atlantis.” Notably featured in Rand’s Atlas Shrugged, the Atlantis metaphor came from Rand’s longtime friend and mentor, Isabel Paterson. Paterson was the eldest and lead mentor among what one journalist called the “three furies” of America’s 20th-century liberty movement, which also included Rand and Rose Wilder Lane. From her post as columnist at the New York Herald Tribune beginning in 1922, Paterson doused “Progressive”-era statists with scalding rebukes and schooled them on history, economics, and the nature of value creation, among other things. Her impact in her own day was remarkable, as is the general absence of appreciation for her breakthroughs and breadth of knowledge today. Sandefur’s forthcoming book—Freedom’s Furies: How Isabel Paterson, Rose Wilder Lane, and Ayn Rand Found Liberty in an Age of Darkness—will help fill the breach, and his essay here, on Paterson and Rand, provides a sneak peek. It’s an insightful tribute to two courageous women who helped push American culture toward reason and capitalism.

Speaking of courageous women, in the next article, the dauntless Ayaan Hirsi Ali makes her TOS debut with “Wokeism and How to Counter It.” Every day, it seems, the vehemently collectivist, anticapitalist, anti-American “woke” movement gains ground in the culture war. In this invigorating read, Hirsi Ali spells out why, and what proponents of individualism and freedom can do about it. If applied with ardor, these ideas could help save the land of the free.

Next up, “Music, Mind, and Morality” is an adaptation of a talk that I gave at TOS-Con 2022. Too many discussions of music are tainted either with dogmatism or subjectivism—or both. We hear the likes of, “Rachmaninoff was the greatest composer ever, period,” on the one hand, and on the other, “musical beauty is in the eye of the beholder.” Here, I attempt to integrate some of today’s best thinking on music and how it affects the mind, its impact on our ability to flourish, and what we can all do to wring every ounce of pleasure from our favorite pieces.

Rounding out our features, Johan Norberg speaks with Thomas and Angelica Walker-Werth about open borders, free trade, innovation, and the vital role that each of these plays in human flourishing. “I have a philosophical conviction,” says Norberg, “that individuals are ends in themselves, not means for the ends of society.” He shows how this moral view also makes practical, economic sense. Norberg even shares the curious story of Londoners’ thirty-year war against the umbrella—which was viewed as “silly,” “feminine,” and a threat to horse-and-buggy drivers—and of the man who persevered in popularizing the innovation.

There you have it. I hope you enjoy the wide-ranging commentary—that it stokes your mind, fuels your soul, and reminds you, as Wos puts it, “that philosophy should not be confusing and disconnected from reality but should instead be a tool for furthering one’s own life and purpose.”

Welcome to the Fall 2022 issue of The Objective Standard, packed with articles building on the foundation of rational philosophy identified by #AynRand.
Click To Tweet