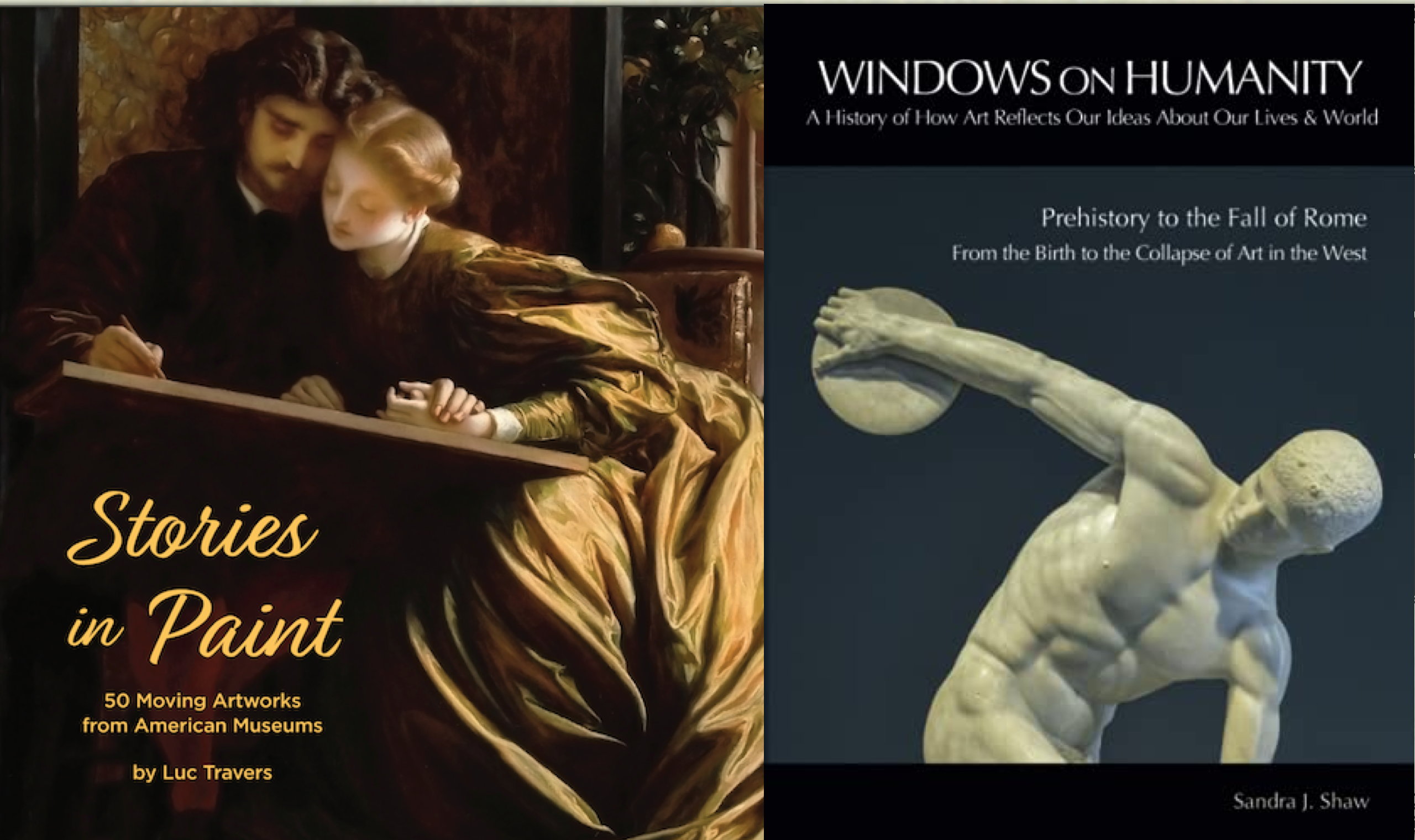 Stories in Paint by Luc Travers and Windows on Humanity: A History of How Art Reflects Our Ideas about Our Lives and World by Sandra Shaw

Ray Bradbury once remarked that, sometime in the 1960s, all the art sneaked off the canvases and jumped onto the movie screens. That, he said, explained why such painters as Kandinsky and Mark Rothko hung blank squares on the walls of art museums. Worse, the absence of art explained why nobody went to museums expecting to be uplifted. After all, “You do not visit an elevator shaft with no elevator in it, do you?”1

Of course, art is not only intended to elevate. But it does express values, and therefore, it says a lot about people, both as individuals and as societies. The people who made and preserved the Artemision Bronze, for example, obviously had a different outlook on life than those who created and preserved Giotto di Bondone’s Ognissanti Madonna or Tracey Emin’s Turner Prize-winning Unmade Bed. And the values expressed by a painting such as Edvard Munch’s The Scream surely differ in important ways from those expressed in William-Adolphe Bouguereau’s Birth of Venus.

Yet contemporary moral and cultural relativism, not to mention the other anti-Western ideologies that now hold hostage some of our major institutions, have obscured the important and rewarding experience of appreciating art and its role in our lives. Indeed, much of the established art community now prioritizes racial politics over aesthetics to such a degree that the Baltimore Museum of Art, the Tate Gallery, the San Francisco Museum of Modern Art (SFMOMA), and others have begun selling pieces by famous white male artists in order to buy works by female or black artists that are of no greater aesthetic value. SFMOMA, for example, recently sold Rothko’s Untitled (1960), which depicts three vertical color rectangles, in order to buy Frank Bowling’s Elder Sun Benjamin (2018), which depicts three horizontal color rectangles.

Meanwhile, postmodern aesthetic theories view art not as an artist’s expression of values, whether rational or irrational, but as a “narrative” that articulates some statement about social “power”—resulting in propagandistic, often banal creations that are incomprehensible to the average person unfamiliar with postmodern jargon and theories. . . .

By giving us doorways into a wider world of art and ideas, @LucTravers and Sandra Shaw have not only done us all a great service but have testified to the enormous value of art in all our lives.
Click To Tweet

View all articles by Timothy Sandefur →
Letter to the Editor
From the Editor, Summer 2022Straight Line Crazy by David Hare