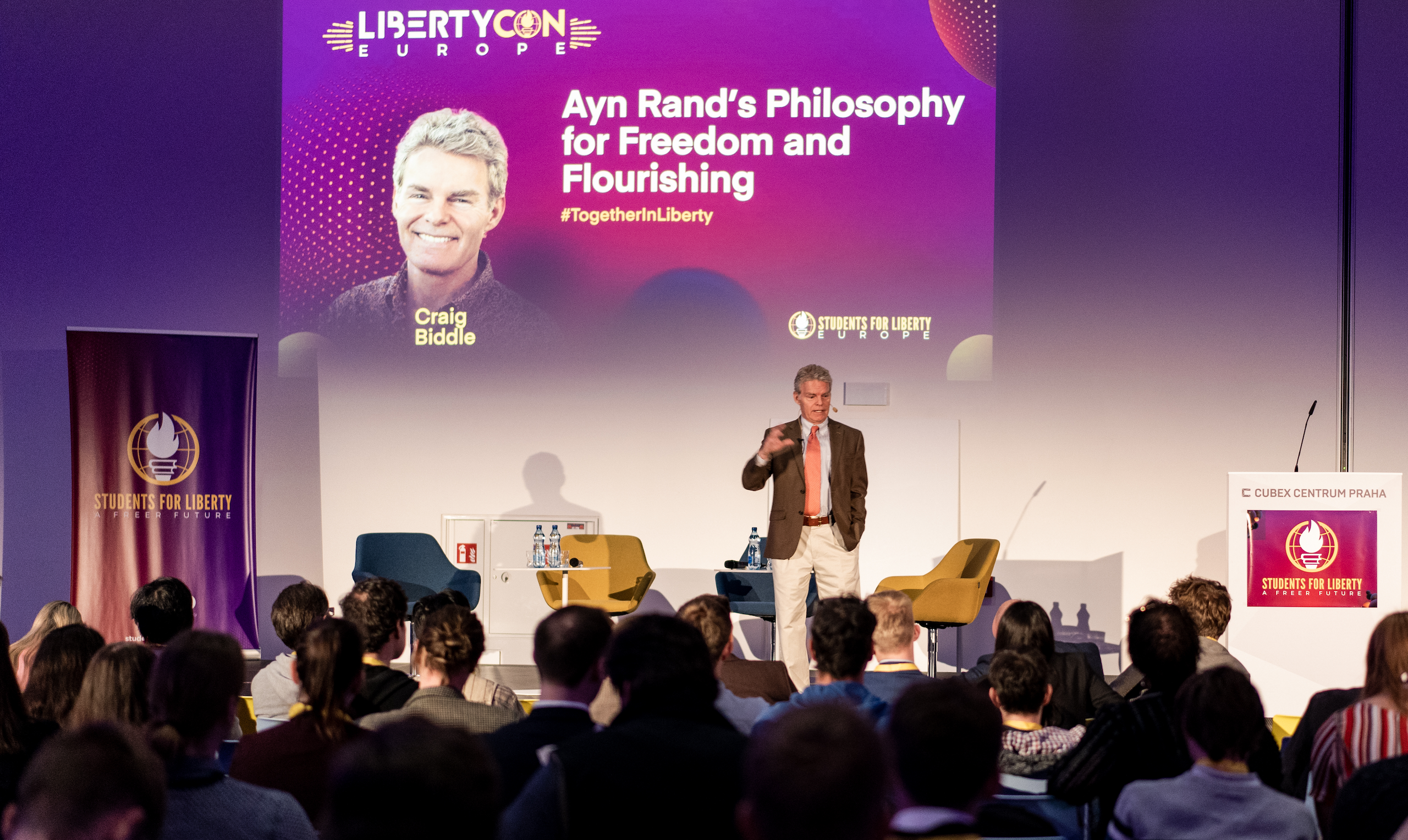 Advancing Ayn Rand’s Ideas in Europe and Beyond

I’m writing from the island of Hvar, Croatia, where Sarah and I are enjoying some rest and relaxation after a four-week speaking tour in Europe.

The tour was part of my work as director of Prometheus Foundation, an organization founded by Carl Barney, the mission of which is to promote Ayn Rand and advance Objectivism by finding and funding independent thinkers who have good ideas, work smart, follow through, and get things done. Annie Vinther Sanz, director of operations at Prometheus Foundation, organized the tour, managed the logistics, coordinated with the hosts, and helped me identify and engage with many promising individuals with whom we might work in the future. (Thank you, Annie!)

Prometheus Foundation has funded many of the organizations and events involved in this tour, and I’d like to share with you some of my experiences with them, which give me great cause for optimism.

The first event was the New Intellectuals Conference (NICON) in Prague, Czech Republic, April 18–22. This was organized and hosted by Isidora Kolar and her remarkable team at Ayn Rand Center Europe (ARCE). Speakers included Isidora, Martin Hooss, Eszter Nova, Leopold Ajami, Angel Walker-Werth, Thomas Walker-Werth, Matt Kibbe, Terry Kibbe, and me. Topics included “Building a Career Consistent with Your Values”; “The Value of Love”; “The Psychological Shift from ‘Who Is Going to Let Me?’ to ‘Who Is Going to Stop Me?’”; “Objectivism and Independence”; and “Promoting Objectivism as a Philosophy for Self-Development.”

NICON was an invitation-only event, and the attendees were 120 top-ranking graduates of ARCE’s John Galt Schools. They were invited based on that ranking and an essay they wrote about an aspect of Objectivism. The students were super-bright, asked excellent questions, and beamed with self-confidence, ambition, and love of life. Mark my words: We will see great things from these budding entrepreneurs and intellectuals in the years to come.

The next stop was Students For Liberty’s annual LibertyCon Europe, also in Prague. Wolf von Laer, his wonderful wife, Sophie, and their amazing team put on a fabulous event with more than seven hundred attendees from all over the world. Speakers included Wolf, Eszter, Matt and Terry, and me.

Ayn Rand’s ideas were front and center at this event, too. In his brief opening speech, Wolf mentioned the importance of Rand’s work in advancing liberty. My keynote address, “Ayn Rand’s Philosophy for Freedom and Flourishing,” summarized her theory of rights and her ethics of egoism, showing how they derive from facts we can see, integrate with each other, and provide an objective foundation for loving life and advancing liberty. Ezster Nova discussed Rand’s ideas during a panel on “Liberty and Cinema,” and Isidora was scheduled to speak on “Advancing Objectivism in Europe” but came down with COVID and was unable to do so.

Angel and Thomas manned a beautiful table with information about, and materials from, both Objective Standard Institute and The Objective Standard. This was one of the busiest, most active tables at the event. Attendees asked questions about Objectivism, spoke at length with Angel and Thomas about Rand’s ideas and philosophy in general, and picked up hundreds of pamphletized TOS articles, including “Ayn Rand’s Theory of Rights”; “Economics in Atlas Shrugged”; “Libertarianism vs. Radical Capitalism”; “Individualism vs. Collectivism”; “A Woke New World”; “The Assault on Corporations”; “Purpose Comes from Reason, Not Religion”; and “Heroes and Villains in Western Philosophy.”

Next, we headed to Budapest, Hungary, where I joined a Free Market Road Show (FMRS) panel with Dan Mitchell, Alberto Mingardi, and John Fund. The topic was monetary policy, inflation, and government spending; my contribution was to identify the underlying moral premises that cause governments and politicians, with support from their constituents, to constantly increase spending (i.e., altruism and collectivism)—and the moral premises we must understand and embrace if we want to solve this problem (egoism and individualism).

We then flew to Zürich, Switzerland, where I spoke at an FMRS event on “The Moral and Philosophic Foundations of Liberty,” again bringing Rand’s ideas to bear on the questions at hand. Our next stop was Warsaw, Poland, where I spoke on “The Morality of Self-Interest and the Facts That Support It.” This event was held at the Freedom Lounge, which is in the center of what used to be communist headquarters in Warsaw. The Lounge had a copy of Atlas Shrugged displayed prominently among the liquor bottles behind the bar. It also had various drinks named after characters from Rand’s novels and free market ideals (e.g., “Gin Galt” and “Adios Socialist”).

Next was Tbilisi, Georgia, where I spoke at Free University on “Ayn Rand’s Theory of Rights” to an extremely active-minded group of students. I also participated in a panel discussion about Rand’s ideas with local intellectuals and activists, which was hosted by Ayn Rand Center Georgia. We then flew to Tirana, Albania, where I spoke at an FMRS event on “The Future of Freedom,” again emphasizing the strength and importance of Rand’s moral and philosophic ideas in this regard.

Then we were off to Milan, Italy, where we met with Alberto Mingardi, director of Bruno Leoni Institute; Marco Bassani, professor of political theory at the University of Milan; and one of their top students, Lisa Kinspergher, whom I had met at NICON and who will be attending Duke University beginning this fall. Among other exciting developments on this leg of the tour, while we were discussing Rand’s ideas with Alberto in his office, a shipment of the newly published Italian version of Capitalism: The Unknown Ideal arrived. This is the first Italian edition of the book, and its arrival dovetailed nicely with our evening activities, which included a screening of We the Living at ILUM University. The growing interest in Rand’s ideas in Italy is heartening. Annie and I will be meeting with Alberto soon about ways to continue and expand this momentum.

Our next stop was Ljubljana, Slovenia, for an FMRS event on “Liberty and Responsibility,” held at the Catholic Institute. My contribution here was to point out that if we want to defend liberty, we have a responsibility to question the moral and philosophic ideas that undermine it, including those of Christianity, and to consider the possibility of a moral code that supports liberty and is grounded in reason and evidence, rather than revelation and faith. Again, the participants asked excellent questions, and enlightening conversations ensued.

We then enjoyed a beautiful drive to Zagreb, Croatia, where I participated in my final FMRS event, this one on the future of Croatia. I pointed out that any effort to defend liberty apart from a secular, evidence-based, provable theory of rights is doomed to fail, and that, fortunately, Ayn Rand has provided us with just such a theory. The audience asked great questions, and we continued the conversation at a lovely local restaurant.

Sarah and I then headed to Hvar for some R&R. But while we were there, I engaged in one more event regarding the advancement of Objectivism.

A few days into our break, I joined Wolf von Laer, Kenneth Wagner, Martin Hooss, and fifty of SFL’s top coordinators on a Zoom call for the official launch of SFL’s new Prometheus Fellowship program. This program, funded by Prometheus Foundation, is one of the most exciting developments in the history of Objectivism. It is designed to teach SFL’s top leaders from around the world about Ayn Rand’s philosophy and how it can help them to succeed in their personal and professional lives and advance freedom on solid ground. During the four-year program, the Fellows will engage in an in-depth study of Objectivism, participating in online seminars as well as live, in-person events; working with study partners; writing papers; and giving oral presentations. They will also participate in a mentorship program in which they initially will be mentees, and, after graduating, mentors for incoming Fellows.

Wolf began the meeting with some inspiring words about the purpose of the program and the quality of the Fellows, who were selected from 320 applicants. He also thanked Carl Barney and Prometheus Foundation for funding the program. I then said a few words about why we at Prometheus Foundation are so excited about SFL’s progress in general and this new program in particular. In short, it’s because of Wolf and his team’s excellent leadership, and because we see SFL—a worldwide network of students and young professionals who want to succeed in life and advance liberty—as the perfect organization through which to present and discuss Rand’s ideas. As I said to the Fellows on the call, the program is not intended to convince them of the truth of Rand’s ideas but, rather, to help them understand exactly what her ideas are so that they can decide for themselves whether the ideas make sense and have value—and, if so, how they might use the ideas to live beautifully and advance liberty.

Martin Hooss, educational content associate for SFL’s New Frontiers of Objectivism program and one of the instructors in the Fellowship program, then discussed the first series of seminars, which will take place over the next three months. These seminars include pre-session readings of Ayn Rand’s and Leonard Peikoff’s works, and workshops with various instructors, including Martin on “Who Is Ayn Rand and What Is Objectivism?”; Eric Daniels on “Capitalism over Collectivism”; Raymond Niles on “Free Markets over Central Planning”; me on “Ayn Rand’s Theory of Rights”; (instructor to be determined, possibly me) on “Rand’s Morality of Rational Self-Interest”; Dianne Durante on “The Power of Romantic Art”; and (instructor to be determined, possibly me) on Rand’s metaphysics and epistemology.

And that is just the beginning. In time, this program will spiral through Rand’s philosophy multiple times, helping the Fellows to understand Objectivism from many perspectives, with ever-deeper and ever-broader integrations. It is a beautiful thing.

SFL and other organizations supported by Prometheus Foundation are advancing Ayn Rand’s ideas in Europe and around the world. I am delighted to be part of these efforts, and I emphatically thank Carl Barney for funding them.

As Sarah and I enjoy our much-needed vacation here on Hvar, we’re reflecting on the amazing progress that Prometheus Foundation, OSI, TOS, ARCE, SFL, Foundation for Economic Education, and our many other affiliates are making in advancing philosophy for freedom and flourishing. Consequently, despite today’s grim political landscape, we are more optimistic and confident than ever about the future.

I hope this brief report has helped to bolster your confidence and optimism, too.

Organizations supported by Prometheus Foundation are advancing Ayn Rand’s ideas in Europe and around the world. I am delighted to be part of these efforts.
Click To Tweet