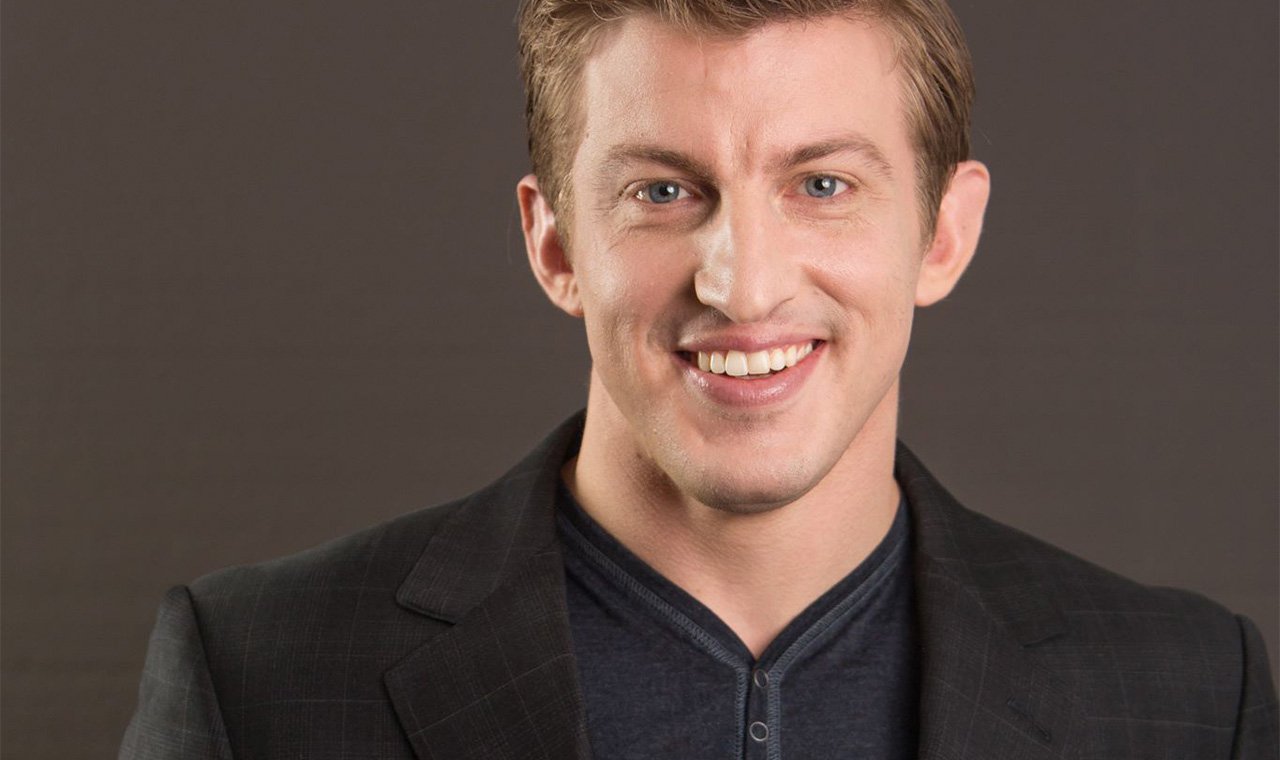 In sports, sometimes a frustrated loser will, instead of playing the game fairly, simply foul the best player on the opposing team. Some of the harshest penalties are reserved for such unsportsmanlike conduct because this conscious intent to harm another player is abominably unjust.

This conduct is not confined to sports. Journalists are capable of similar injustices and should be subject to appropriate penalties. This is true of Maxine Joselow of the Washington Post, who recently penned a hit piece slandering the author, philosopher, and energy expert Alex Epstein.

Epstein’s 2014 book The Moral Case for Fossil Fuels clearly and convincingly argued that climate change is nowhere near—and will not become—catastrophic. By contrast, eliminating or drastically curtailing fossil fuel use will cause catastrophe because it’s our only cheap, plentiful, and reliable form of energy. Further, if we care about human flourishing, we should not only celebrate fossil fuels and those who turn otherwise useless muck into the power source for civilization, but we should also use more such fuels on net, especially in developing countries where lives literally depend on removing anti-fossil-fuel restrictions.

Through full-context evaluation and meticulous research, Epstein has managed to substantially change the debate over fossil fuel use. In so doing, he has become a thorn in the side of climate activists. So, it’s unsurprising that his forthcoming book, Fossil Future, has raised their ire. What is surprising is the lowly nature of the response: outright lies and ad hominem.

Joselow, a self-described “climate reporter,” committed these offenses in an as-yet-unreleased article for the Washington Post. After Epstein’s publicist sent Joselow an early review copy of Fossil Future, Joselow responded “as a courtesy” with “a detailed list of the allegations and information” she planned to publish. Instead of engaging with the book’s arguments, Joselow attempted to undercut them by attacking the character of their source, accusing Epstein of racism on the basis of two articles he wrote between the ages of eighteen and nineteen while an undergraduate at Duke University. On its face, the tactic is devious, but the twisting of Epstein’s words makes Joselow’s smear even more obscene. Epstein has explained the misrepresentation in a video, which I highly recommend both as an explanation of the particulars of this case and as a guide and warning to those regularly consuming news media. Here, I’ll only briefly restate a few essentials.

In articles for the Duke Review, Epstein argued for the superiority of Western culture and also leveled criticisms against Martin Luther King Jr., both of which Joselow has portrayed as racist. King was of course right when he characterized racism as judging people by the color of their skin instead of the content of their character. Epstein’s arguments in both cases are about the character of those in question—the quality of their ideas and actions.

Epstein argued that Western culture is superior because it enshrines reason and freedom—ideas upon which civilization depends—whereas much of the third world was (and remains) overrun by mysticism and authoritarianism. Culture is a product of ideas, not skin color. To imply, as Joselow does, that culture and ideas are determined by skin color is an instance of racism.

Regarding King, Epstein argued that Duke’s policy of celebrating his birthday but not those of Abraham Lincoln, George Washington, Thomas Jefferson, or Christopher Columbus was unjust. “My basic argument was that if you matched King’s strengths and weaknesses against those others, he does not deserve a holiday above all of them.” The problem is, Epstein says, that although we justly criticize the failings of the others, many are silent on King’s, in large part because of the racist policy of refraining from judging the ideas and actions of black icons because they’re black. Epstein criticized King’s:

One might reasonably object to Epstein’s arguments, as some of his fellow Duke students did, but none of them attacked Epstein as racist—because there was no evidence of racism. And, at this point, given all of Epstein’s subsequent writing (including his positive statements about King in Fossil Future, which Joselow apparently did not even take the time to read), there is a mountain of evidence to the contrary. In fact, as a teenager, Epstein was first inspired to take up the pen by the writings of such staunchly pro-individualist thinkers as Thomas Sowell and Ayn Rand, and he has consistently upheld the principle that the only things we can properly judge people upon are their ideas and actions—their character, not superficial traits such as skin color.

As revealed in Epstein’s video, Joselow’s attempted sucker punch is a desperate effort to debilitate an opponent. The article was slated for release this morning but, perhaps because of Epstein’s cogent response, has yet to be published. But as Epstein, himself a former editor, aptly points out, the Washington Post morally must do more. It must fire Joselow for her journalistic malpractice and publicly commit to honest journalism, free of such intentional injustice.

To help Epstein fight back, consider resharing his tweets, writing to the Washington Post, and tweeting @washingtonpost and @maxinejoselow, calling for them to dump the piece and issue an apology. You can also support Epstein’s fight for human progress and flourishing by ordering a copy of Fossil Future.

Instead of engaging with @AlexEpstein’s energy arguments, @maxinejoselow is trying to torch his career by smearing him as a racist. @washingtonpost should:

1. Fire Joselow for malpractice
2. Apologize to Epstein
3. Pledge to root out smearing 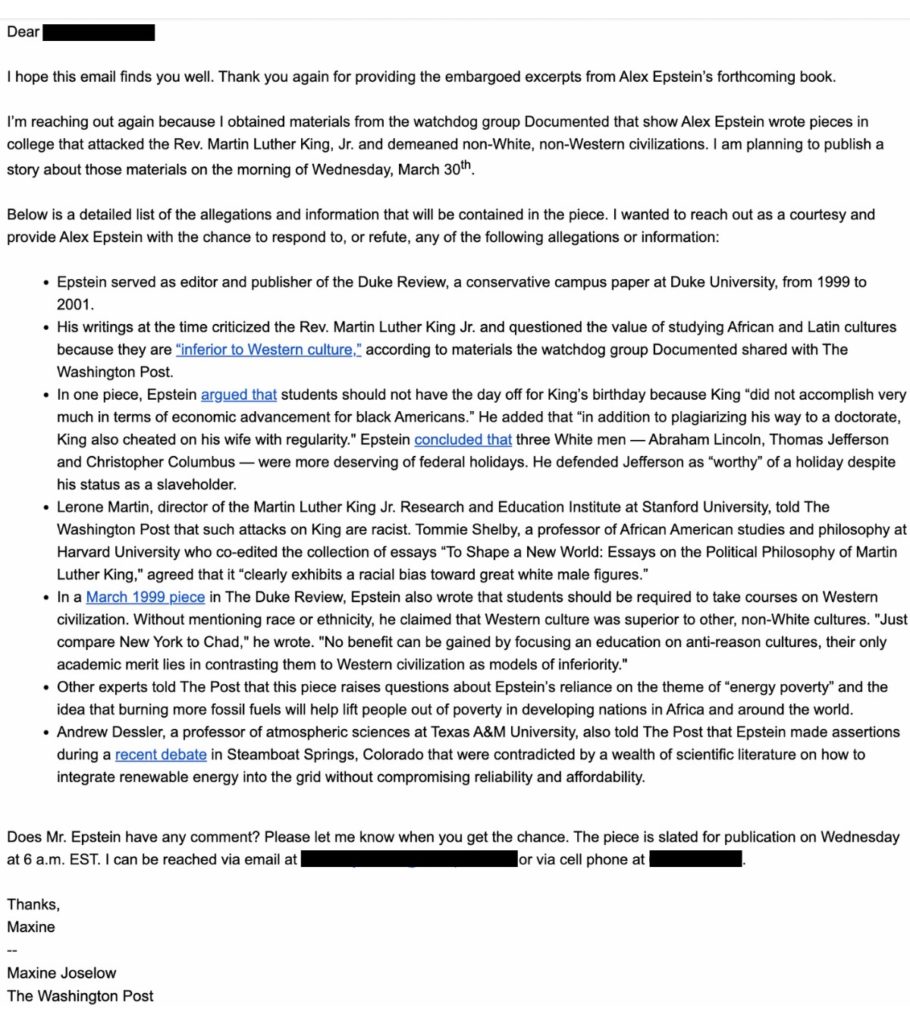 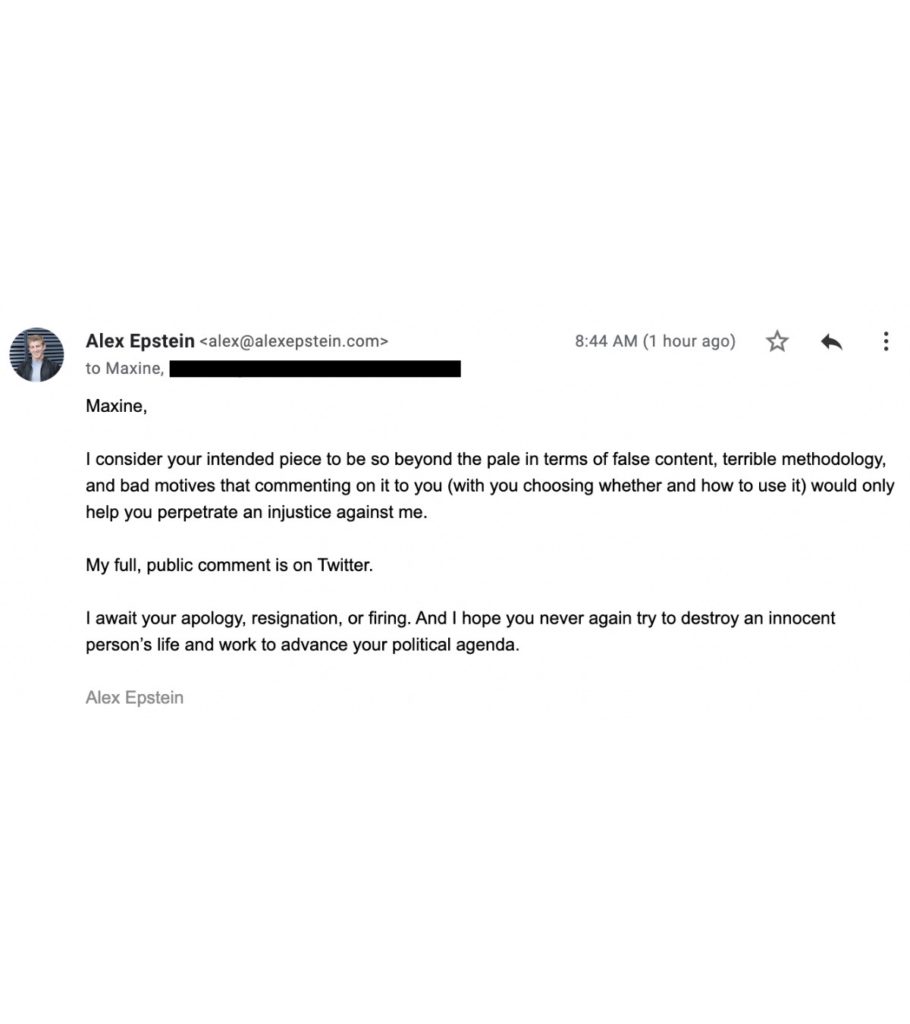 Editor's note: The original posting of this article incorrectly stated that Epstein's publicist had received a prepublication version of the article. The message received is now included above.

View all articles by Jon Hersey →
The Sinner and the Saint: Dostoevsky and the Gentleman Murderer Who Inspired a Masterpiece by Kevin BirminghamThe Collectivist Roots of Russian Atrocities
Return to Top