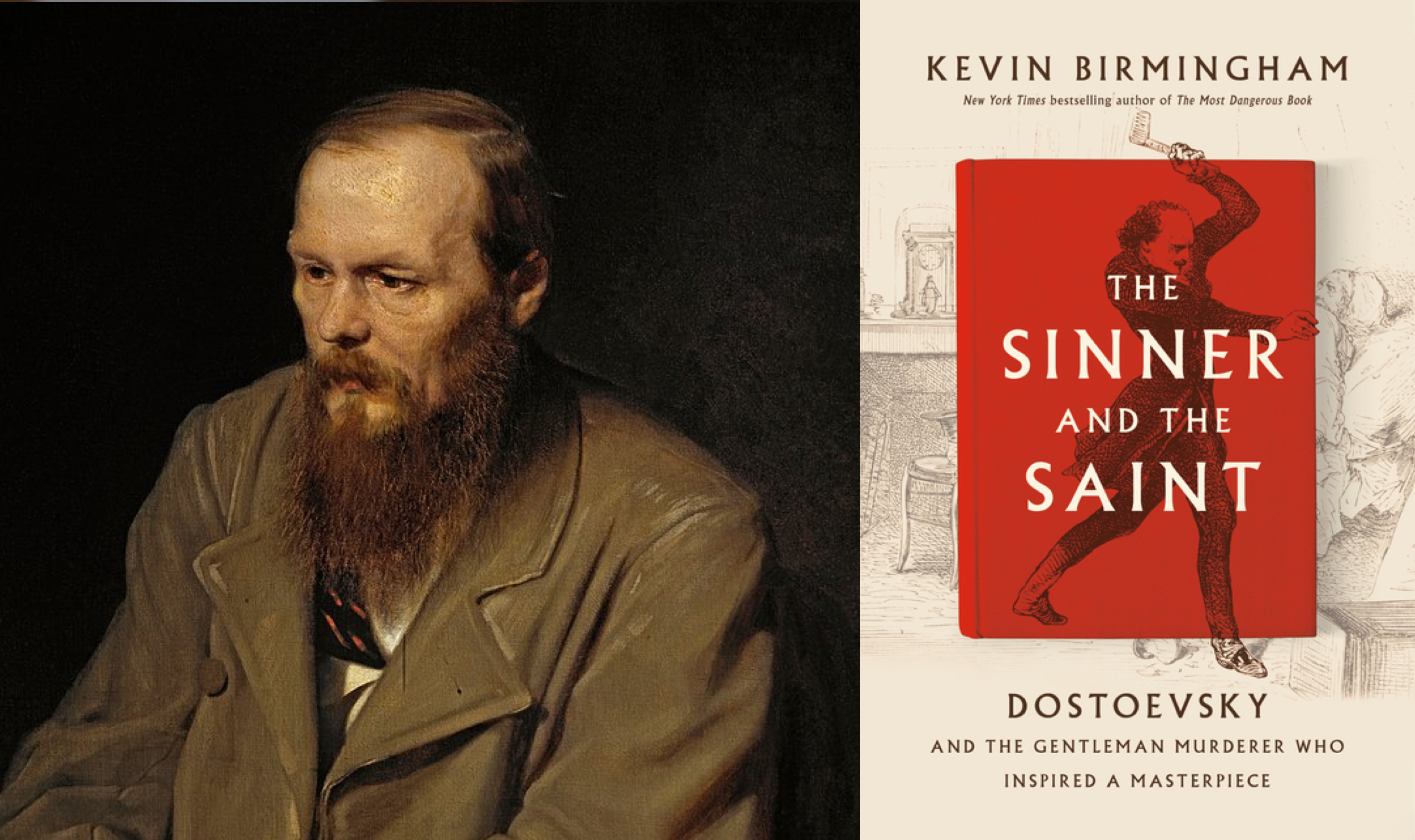 The Sinner and the Saint: Dostoevsky and the Gentleman Murderer Who Inspired a Masterpiece by Kevin Birmingham

Anyone who has read Fyodor Dostoevsky’s masterpiece Crime and Punishment can testify to the spooky exactitude of the novelist’s psychological insight and the haunting ways in which his characters act on some of humanity’s worst motivations. Its protagonist, Rodyon Raskolnikov, is an immortal figure in world literature largely because of the complexity of the reasons for which he murders his landlady and her niece.

Sometimes he claims that the killing is a political blow against exploitative capitalists—but he’s not really a politically minded character. Sometimes, he recites Hegelian or Nietzschean notions about “superior” people being exempt from the moral rules that apply to others—but he’s a sickly misanthrope, practically the opposite of an Übermensch. He conceals his crime, terrified of being caught, and he’s tormented by his own conscience, which manifests as kindness to the unfortunate and indignation at the way his sister’s fiancé mistreats her—neither of which are reactions one would expect from a revolutionary or a sociopath.

In the end, the reader finds that, notwithstanding his bravado, Raskolnikov is moved to kill out of a nebulous desire to demonstrate his efficacy—simply to prove that he can—which he vaguely thinks will somehow affirm his authenticity or significance in the universe. Or, as Kevin Birmingham puts it in this lively examination of Crime and Punishment’s writing, “he doesn’t murder to be a Napoleon or to be a lawgiver or even to rule over others. . . . [Raskolnikov says] ‘I just wanted to dare.’ . . . [He] doesn’t kill for an idea. Raskolnikov kills for nothing” (312).

Birmingham’s book sets out to examine the tangled motives of both the character and his creator by detailing the turbulent atmosphere in which Dostoevsky composed Crime and Punishment and the personal and financial pressures that operated on him as he wrote. In particular, Birmingham highlights the real-life crimes of Pierre François Lacenaire, a Frenchman who robbed and murdered a man in 1834 and became a celebrity thanks to a highly publicized trial at which he claimed that his crime was meant to protest economic inequality. Well-read and articulate, Lacenaire published poems and magazine articles from his jail cell and went to the guillotine unrepentant. Dostoevsky knew the story thanks to old news reports that he reprinted in a magazine he edited in 1861, before writing Crime and Punishment.

Birmingham describes Lacenaire’s crime and execution alongside Dostoevsky’s own life story in alternating chapters—an effective device for bringing drama to what might otherwise be a dry, even depressing story about a writer who was sick, unhappy, and often penniless, scribbling out novels to pay off his gambling debts. But how much does the Lacenaire murder really tell us about Crime and Punishment? The reality, as Birmingham acknowledges, is that Dostoevsky found inspiration for the novel not just in that crime, but in many other incidents and personalities. And as Birmingham lays these out, it eventually becomes clear that the Lacenaire case was a relatively minor factor in the composition of the novel. . . .

Kevin Birmingham's new book on #Dostoevsky offers a dramatic and enlightening introduction to the complicated context in which one of literature’s greatest and most horrifying novels was created.
Click To Tweet