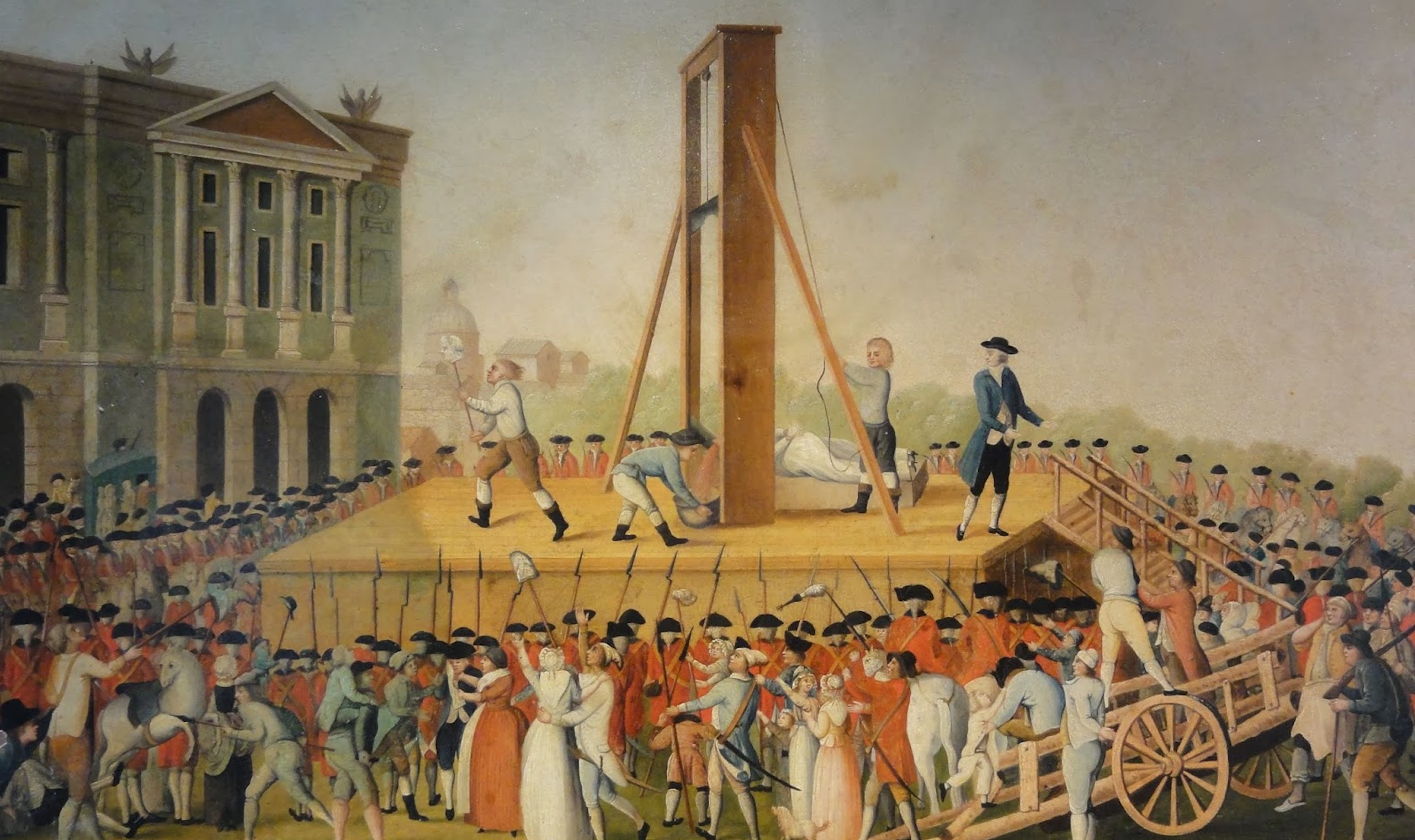 Why French Revolution-Inspired Attitudes toward the Ultra-Wealthy Are Nonsensical

When Elon Musk became the richest man in the world, one Redditor declared, “Elon Musk becomes richest man: First in line for the guillotine,” to which another replied, “Once his head’s off, we’re throwing Bezos on there next.”1

In August 2020, protestors set up an actual guillotine outside Jeff Bezos’s house.2 At a rally for Elizabeth Warren in 2019, the crowd began chanting, “Eat the rich,” a reference to a quote attributed to Jean-Jacques Rousseau: “When the people shall have nothing more to eat, they will eat the rich.”3

Rousseau lived in a time when starvation was an ever-present threat for many people. He was born shortly after France’s famine of 1709, in which an estimated two hundred thousand people starved to death.4 Workers in the 1780s in Paris typically spent 70–90 percent of their wages on food alone.5 Their anger toward the French aristocracy, which consisted mostly of people born into or granted wealth rather than achieving it through work and merit, was understandable, especially because of the extremely limited social mobility possible at that time.

By contrast, in the United States today, nearly 90 percent of the population never has to worry about having something to eat, and even the poorest spend a maximum of 43 percent of their income on food.6 So where does all this French Revolution-inspired rage toward the ultra-wealthy come from? Is it warranted?

Many seem to be angry at people such as Bezos and Musk simply because they’re so wealthy. This sentiment is exemplified by Bernie Sanders’s tweet that “Billionaires should not exist,” which got more than 19,000 retweets and 103,000 likes.7 A popular article with the same title references a speech made by Representative Alexandria Ocasio-Cortez in which she claims, “No one ever makes a billion dollars. You take a billion dollars.”8

In that speech, AOC claims that billionaires are billionaires because they don’t pay their employees a “livable wage” (a nebulous term that ignores the fact that the price of labor is determined by the same factors that set other market rates, such as scarcity).9 But take an example from one of Musk’s own companies. Employees at Tesla make more per hour (plus benefits) than their unionized counterparts at GM and other large automakers, and the median Tesla employee makes significantly more (estimates range from 15 to 81 percent more) than the average American.10 Further, without the businessmen whose hard work, capital, and innovation create those jobs, countless would earn lesser wages or no wage at all.

Granted, it’s certainly possible to become a billionaire through dishonest means. Although people such as Bill Gates, Jeff Bezos, and Steve Jobs made their fortunes primarily by producing extraordinary products that people are eager to buy, many of today’s very wealthy people also have been enriched by such unjust means as subsidies, corporate bailouts, and fraud.

However, many on the left do not stop at these legitimate criticisms. Instead, they wrongly claim that the ultra-wealthy hoard their wealth, keeping it from the rest of the world like a mythical dragon sitting on his treasure.11 Although nothing is immoral about a person keeping or spending all the wealth he has honestly earned, the fact is that most wealth is not in the form of cash, yachts, or mansions. Most keep nearly all their money in active business interests and investments; Jeff Bezos, for example, keeps about 90 percent of his wealth invested in Amazon.12 That means that most of what he “owns” is warehouses, delivery vehicles, and other goods that are actually out in the economy serving his customers.

Even the money that people “put away” in savings accounts or insurance policies is put to beneficial use. Economist Ludwig von Mises explains:

When a man has accrued a certain amount of money—let us say, one thousand dollars—and, instead of spending it, entrusts these dollars to a savings bank or an insurance company, the money goes into the hands of an entrepreneur, a businessman, enabling him to go out and embark on a project which could not have been embarked on yesterday, because the required capital was unavailable.

In other words, money invested or saved in a bank benefits entrepreneurs, business owners, employees—and consumers, who now have the option to patronize the business that the investor’s capital has made possible. Economist Henry Hazlitt went so far as to argue that although charity or private spending can help others (by providing them money for their products or services), investing is the means by which rich people help the most people:

Even if the rich spend their money foolishly and wastefully, they give employment to the poor as servants, as suppliers, even as panderers to their vices. But what is too often forgotten is that if the rich saved and invested their money they would not only give employment to just as many people producing capital goods, but that as a result of the reduced costs of production and the increased supply of consumer goods which this investment brought about, the real wages of the workers and the supply of goods and services available to them would greatly increase.14

By “real wages,” Hazlitt referred not only to the worker’s take-home pay, but to the amount of purchasing power he has. The reduced costs of production and increased supply cause the price of goods to go down, so the worker can purchase more with what he earns. And capital investment is largely used to provide, upgrade, and maintain tools, machinery, and facilities. This boosts worker productivity, which increases real worker wages. This is not simply because of the employer’s increased revenue, but also because the increased supply of goods and services available make all such products cheaper, increasing purchasing power both for workers and other consumers. As Mises explains, “With the aid of better tools and machines, the quantity of the products increases and their quality improves. As the employer consequently will be in a position to obtain from the consumers more for what the employee has produced in one hour of work, he is able—and, by the competition of other employers, forced—to pay a higher price for the man’s work.”

Consider the broader context for some such as Musk. At the end of 2021, Musk had about 65 percent of his wealth invested in Tesla, a further 18 percent in SpaceX, and smaller amounts invested in other companies such as The Boring Company and Neuralink.15 So, although his net worth at the end of last year was more than $260 billion, about $223 billion was invested in Tesla and SpaceX alone, enabling those companies (and others) to purchase and maintain facilities, materials, and machinery; to hire people and provide them with above-average salaries. Similarly, Bezos’s massive investment in Amazon enables it to offer cheap, accessible goods to people all over the world, as well as a platform on which millions of other merchants trade with customers using Amazon’s tech.

To say that nobody should be a billionaire, or obscenely, that the wealthy deserve to be guillotined for their prosperity, or that the ultra-wealthy are hoarding resources—these statements don’t make moral or economic sense. Rational economists such as Mises and Hazlitt long ago illustrated the nature of the errors behind them.

To condemn Jeff Bezos as the next King Louis or Marie Antoinette is utterly nonsensical. Their productivity and the standard of living they make possible for millions of people should be celebrated, not condemned.

To condemn entrepreneurs as the next King Louis or Marie Antoinette is utterly nonsensical. Their productivity and the standard of living they make possible for millions of people should be celebrated, not condemned.
Click To Tweet

View all articles by Angelica Walker-Werth →
Why Jeff Bezos Is Not a “Tech Mogul” or “King of E-Commerce”The Book of Boba Fett, Created by Jon Favreau

9. David Youngberg, “Income Is Determined by the Scarcity of Your Contribution, Not the Value of Human Worth,” Foundation for Economic Education, April 11, 2019, https://fee.org/articles/income-is-determined-by-the-scarcity-of-your-contribution-not-the-value-of-human-worth/.

10. “How Much a Tesla Employee Make in an Hour? More than their Other EV industry Counterparts?” News18 Business Desk, January 9, 2022, https://www.news18.com/news/business/how-much-a-tesla-employee-make-in-an-hour-more-than-their-other-ev-industry-counterparts-4586189.html; Mark Matousek, “The median Tesla employee made 81% more than the median American in 2018,” Business Insider, May 1, 2019, https://www.businessinsider.com/teslas-median-employee-made-81-more-than-the-median-american-in-2018-2019-5?r=US&IR=T.

11. Dylan Matthews, “You're not imagining it: the rich really are hoarding economic growth,” Vox, August 8, 2017, https://www.vox.com/policy-and-politics/2017/8/8/16112368/piketty-saez-zucman-income-growth-inequality-stagnation-chart.