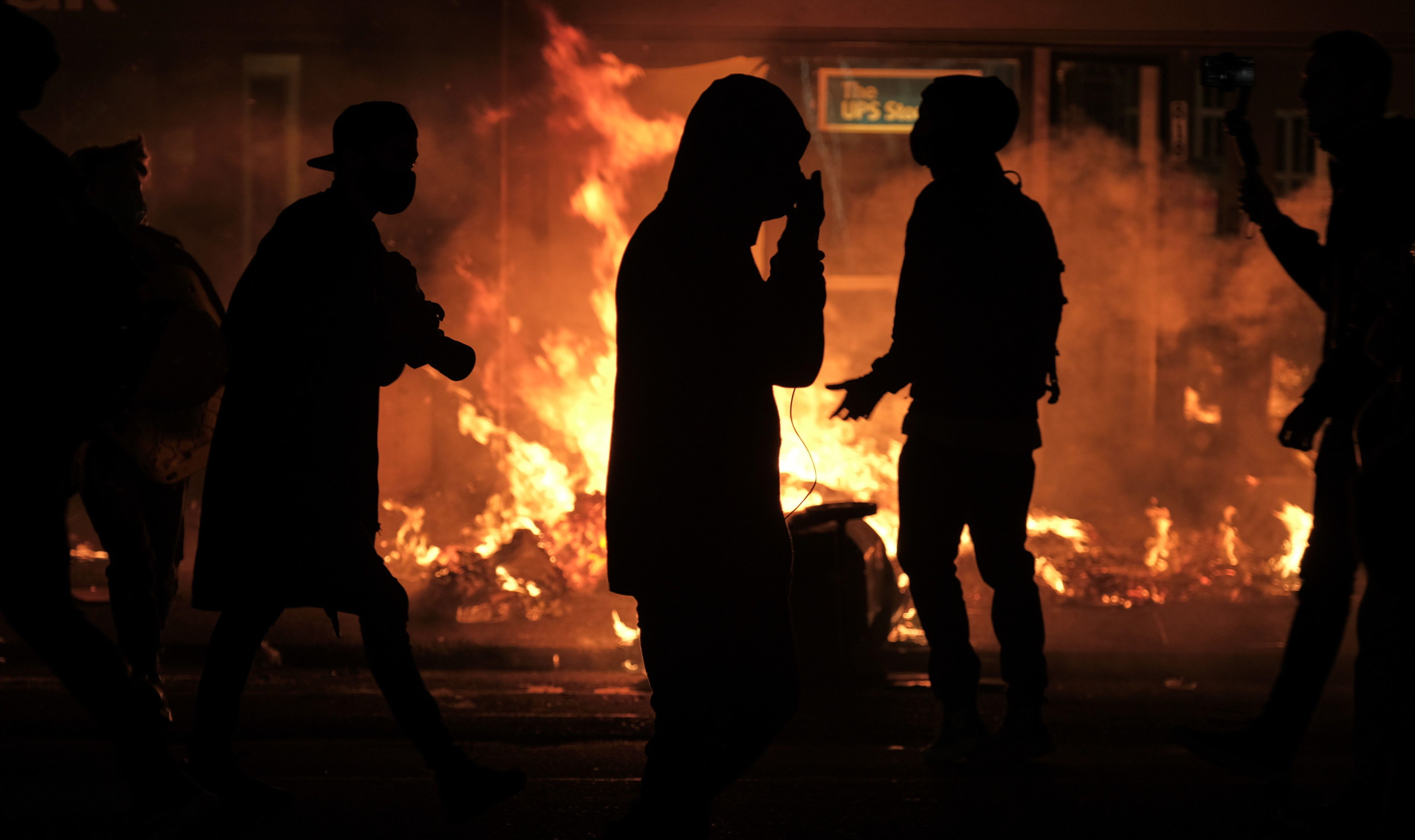 On May 25, 2020, four police officers arrested George Floyd, a black man, for using a counterfeit $20 bill. While Floyd was lying face down on the ground, handcuffed, officer Derek Chauvin knelt on his neck for more than eight minutes, killing him.1 This flagrant injustice spurred nationwide riots and protests. Many Americans were outraged over what they assumed was a racially motivated murder. The sales of books on racism soared, from Ibram X. Kendi’s How to Be an Antiracist to Ijeoma Oluo’s So You Want to Talk About Race, to Robin DiAngelo’s White Fragility: Why It’s So Hard for White People to Talk About Racism. According to a Monmouth University poll taken shortly after Floyd’s death, 78 percent of Americans believed the protesters’ anger was justified, though they didn’t fully agree with the protesters’ actions.2 And a Pew poll showed that two-thirds of Americans support the Black Lives Matter (BLM) movement.3

The riots, the unrest, the protests, the turmoil, however, overshadowed something else. Floyd’s killing accelerated an ominous trend that has grown in recent years. Started in universities, this trend has spread like a virus throughout our culture. One example is the story of David Shor, a political data scientist who worked for Civis Analytics.

On May 28, 2020, Shor tweeted research by Princeton professor Omar Wasow. Summarizing Wasow’s findings, Shor wrote that peaceful civil rights protests have led to more votes for Democrats whereas riots have led to fewer votes.4 This crossed the line for activists such as Arianna Trujillo-Wesler who tweeted, “This take is tone deaf . . . and reeks of anti-blackness.”5 She also tagged Civis Analytics CEO Dan Wagner, writing, “Come get your boy.”6 Shor then backpedaled, tweeting, “I regret starting this conversation and will be much more careful moving forward.”7 After reviewing what happened, Civis Analytics fired Shor. A couple of weeks later, the electronic mailing list “Progressphiles,” which Shor participated in, announced that it kicked him out for his “racist tweet.”8

Yes, you read that correctly. In some circles, examining the repercussions of riots is considered racist. . . .

View all articles by Michael Dahlen →
Letter to the Editor
Michael Crichton: Jurassic Renaissance ManReach the Heights You Dream Of

1. Floyd’s autopsy showed that he had high levels of fentanyl in his system. Some have argued that this is likely what killed him. However, in the autopsy report, the county medical examiner listed the cause of death as “cardiopulmonary arrest complicating law enforcement subdual, restraint, and neck compression.” The examiner also listed the manner of death as “homicide.” See Erin Donaghue, “Two Autopsies Both Find George Floyd Died by Homicide, but Differ on Some Key Details,” CBS News, June 4, 2020, https://www.cbsnews.com/news/george-floyd-death-autopsies-homicide-axphyxiation-details/.

2. “Protestors’ Anger Justified Even If Actions May Not Be,” Monmouth University Polling Institute, June 2, 2020, https://www.monmouth.edu/polling-institute/reports/monmouthpoll_us_060220/.

5. On May 28, 2020, Ari Trujillo-Wesler tweeted, “Yo. Minimizing black grief and rage to ‘bad campaign tactic for the Democrats’ is bullshit most days, but this week is absolutely cruel. This take is tone deaf, removes responsibility for depressed turnout from the 68 Party and reeks of anti-blackness.” See https://twitter.com/TheReFTW/status/1266146619805728768.

7. On May 29, 2020, David Shor tweeted, “While I strongly admire @owasow ’s work, it’s clear that I have not been, due to both my background and words, an effective messenger of his findings about the power of non-violent protest. I regret starting this conversation and will be much more careful moving forward.” See https://twitter.com/davidshor/status/1266448606321664004.

14. Jonathan Turley, “Revolution Redux? How a Movement for Reform Is Becoming a Platform for Radicalism,” June 8, 2020, https://jonathanturley.org/2020/06/08/welcome-to-french-revolution-2-0-how-a-movement-for-reform-is-becoming-a-platform-for-radicalism/.

17. On June 5, 2020, Ilhan Omar tweeted, “The Minneapolis Police Department has proven themselves beyond reform. It’s time to disband them and reimagine public safety in Minneapolis. Thank you to @MplsWard3 for your leadership on this!” See https://twitter.com/IlhanMN/status/1268945330139209729?s=20.

21. Victor Garcia, “Black Lives Matter Leader States if US ‘Doesn’t Give Us What We Want, Then We Will Burn Down This System,’” Foxnews.com, June 24, 2020, https://www.foxnews.com/media/black-lives-matter-leader-burn-down-system.

27. On June 8, 2020, Harald Uhlig tweeted, “Too bad, but #blacklivesmatter per its core organization @Blklivesmatter just torpedoed itself, with its full-fledged support of #defundthepolice: ‘We call for a national defunding of police.’ Suuuure. They knew this is non-starter, and tried a sensible Orwell 1984 of saying.” See https://twitter.com/haralduhlig/status/1270199700071821312; On June 8, 2020, Harald Uhlig tweeted, “and creationists. Oh well. Time for sensible adults to enter back into the room and have serious, earnest, respectful conversations about it all: e.g. policy reform proposals by @TheDemocrat and national healing. We need more police, we need to pay them more, we need to train.” See https://twitter.com/haralduhlig/status/1270199702861099010.

28. On June 9, 2020, Justin Wolfers tweeted, “I don’t think it’s just or fair that Uhlig, as an editor at the @JPolEcon is an important gatekeeper for economists trying to make their mark. I don’t think the profession’s resolve to look more deeply into racial justice will get a fair hearing under his editorship.” See https://twitter.com/JustinWolfers/status/1270454652816015361.

30. William A. Jacobson, “The Bloodletting and Wilding Is Part of an Agenda to Tear Down the Country,” Legal Insurrection, June 3, 2020, https://legalinsurrection.com/2020/06/the-bloodletting-and-wilding-is-part-of-an-agenda-to-tear-down-the-country/.

56. On June 3, 2020, NYTimesGuild tweeted, “The @nyguild and @NYTimesGuild issues the following statement in response to a clear threat to the health and safety of journalists we represent. New York Times employees will send a letter directly to Times management about their concerns.” See https://twitter.com/NYTimesGuild/status/1268365059253833728 (emphasis added).

58. On May 31, 2020, Lee Fang tweeted, “Seeing so many manipulate the MLK quote that riots are the ‘language of the unheard.’ Read the actual speech. It’s a passionate argument against riots and in support of nonviolence at a time when much of the radical left despised MLK and embraced violence. https://gphistorical.org/mlk/mlkspeech/index.htm.” See https://twitter.com/lhfang/status/1267151629955952641.

61. On June 4, 2020, Akela Lacy tweeted, “Tired of being made to deal with my coworker @lhfang continuing to push narratives about black on black crime after repeatedly being asked not to. This isn’t about me and him it’s about institutional racism and using free speech to couch anti-blackness. I am so fucking tired.” See https://archive.vn/NuoR8.

63. Daniel Roberts, “Drew Brees on Potential Return of NFL Kneeling Protests: ‘I will never agree with anybody disrespecting the flag,’” yahoo!finance, June 3, 2020, https://finance.yahoo.com/news/drew-brees-on-potential-return-of-nfl-kneeling-protests-i-will-never-agree-with-anybody-disrespecting-the-flag-172424082.html.

71. Why a Pedagogy of Emotional Engagement Is Necessary,” in Seeing Race Again, Countering Colorblindness Across the Disciplines, 327.

77. To be sure, the government violates rights in countless ways, but most of these violations don’t discriminate based on identity. Regarding sodomy laws, although they remain on the books in some states, they’re not enforced.

78. For information on social attitudes toward gays, see https://en.wikipedia.org/wiki/Societal_attitudes_toward_homosexuality#United_States. Many people think that racism grew under President Donald Trump, but some evidence shows otherwise. See Isaac Stanley-Becker, “Racial Prejudice Has Declined as a Reaction to Trump’s Presidency, a New Study Suggests,” Washington Post, May 24, 2019, https://www.washingtonpost.com/nation/2019/05/24/racial-prejudice-trump-presidency-study/.

79. The proponents of this view argue that these biases are not necessarily intentional but “unconscious” and “implicit.” Researchers measure this alleged bias with the Implicit Association Test (IAT), which purportedly shows that 90–95 percent of people have implicit biases. The IAT, however, has two major problems. First, it’s not reliable. Often, a subject who takes the test again will have a widely different score than the first time he took it. Second, the test is not valid insofar as it fails to measure what it claims to be measuring. The creators of the IAT now admit that even if a person has a bias, the test does not predict that he will act on it. For a detailed discussion of the IAT’s problems, see Heather Mac Donald, The Diversity Delusion: How Race and Gender Pandering Corrupt the University and Undermine Our Culture (New York: St. Martin’s Griffin, 2018), 87–93, 96, 98.

80. According to the Census Bureau, the average income of non-Hispanic white Americans in 2019 was $59,376; for Asian Americans, $66,679. See “Table P-4. Race and Hispanic Origin of People (Both Sexes Combined) by Median and Mean Income,” United States Census Bureau, https://www.census.gov/data/tables/time-series/demo/income-poverty/historical-income-people.html (accessed March 31, 2021).

85. Amy Sun, “Equality Is Not Enough: What the Classroom Has Taught Me about Justice,” everyday feminism, September 16, 2014, https://everydayfeminism.com/2014/09/equality-is-not-enough/.

94. Kimberlé Williams Crenshaw, “Unmasking Colorblindness in the Law: Lessons from the Formation of Critical Race Theory,” in Seeing Race Again, 68.

96. Marzia Milazzo, “On the Transportability, Malleability, and Longevity of Colorblindness: Reproducing White Supremacy in Brazil and South Africa,” in Seeing Race Again, 106.

108. Glenn Adams and Phia S. Salter, “They (Color) Blinded Me with Science: Counteracting Coloniality of Knowledge in Hegemonic Psychology,” in Seeing Race Again, 276.

114. On May 22, 2020, Nikole Hannah-Jones tweeted, “There is a difference between being politically black and being racially black. I am not defending anyone, but we all know this and should stop pretending that we don’t.” See https://twitter.com/JamelTheCreator/status/1263895293654941697/photo/1.

128. Paul Rossi, “I Refuse to Stand By while My Students Are Indoctrinated,” Common Sense with Bari Weiss, April 13, 2021, https://bariweiss.substack.com/p/i-refuse-to-stand-by-while-my-students.

135. “Tool: Recognizing Microaggressions and the Messages They Send,” https://academicaffairs.ucsc.edu/events/documents/Microaggressions_Examples_Arial_2014_11_12.pdf.

136. “Tool: Recognizing Microaggressions and the Messages They Send.”

148. On June 2, 2020, CBS News quoted Nikole Hannah-Jones, tweeting, “‘Violence is when an agent of the state kneels on a man’s neck until all of the life is leached out of his body. Destroying property, which can be replaced, is not violence. To use the same language to describe those two things is not moral’ -@nhannahjones on CBSN.” See https://twitter.com/CBSNews/status/1267877443911778306.

149. On September 30, 2020, APStylebook tweeted, “Focusing on rioting and property destruction rather than underlying grievance has been used in the past to stigmatize broad swaths of people protesting against lynching, police brutality or for racial justice, going back to the urban uprisings of the 1960s (2/5).” See https://twitter.com/APStylebook/status/1311357912078585858.

152. Arwa Mahdawi, “If Violence Isn’t the Way to End Racism in America, Then What is?” Guardian, May 30, 2020, https://www.theguardian.com/commentisfree/2020/may/30/if-violence-isnt-way-end-racism-america-then-what-is-george-floyd-protests.

154. Nikole Hannah-Jones, “Our Democracy’s Founding Ideals Were False When They Were Written. Black Americans Have Fought to Make Them True,” New York Times Magazine, August 14, 2019, https://www.nytimes.com/interactive/2019/08/14/magazine/black-history-american-democracy.html.

160. On July 4, 2020, Colin Kaepernick tweeted, “Black ppl have been dehumanized, brutalized, criminalized + terrorized by America for centuries, & are expected to join your commemoration of “independence”, while you enslaved our ancestors. We reject your celebration of white supremacy & look forward to liberation for all.” See https://twitter.com/Kaepernick7/status/1279463720318570497.

162. Nate Nesbit, “White America: What More Can You Possibly Ask of Us?” Rolling Stone, October 11, 2020, https://www.rollingstone.com/politics/political-commentary/black-lives-matter-george-floyd-breonna-taylor-1070417/.

168. For a detailed exposition of such a philosophy, see Leonard Peikoff, Objectivism: The Philosophy of Ayn Rand (New York: Dutton, 1991).