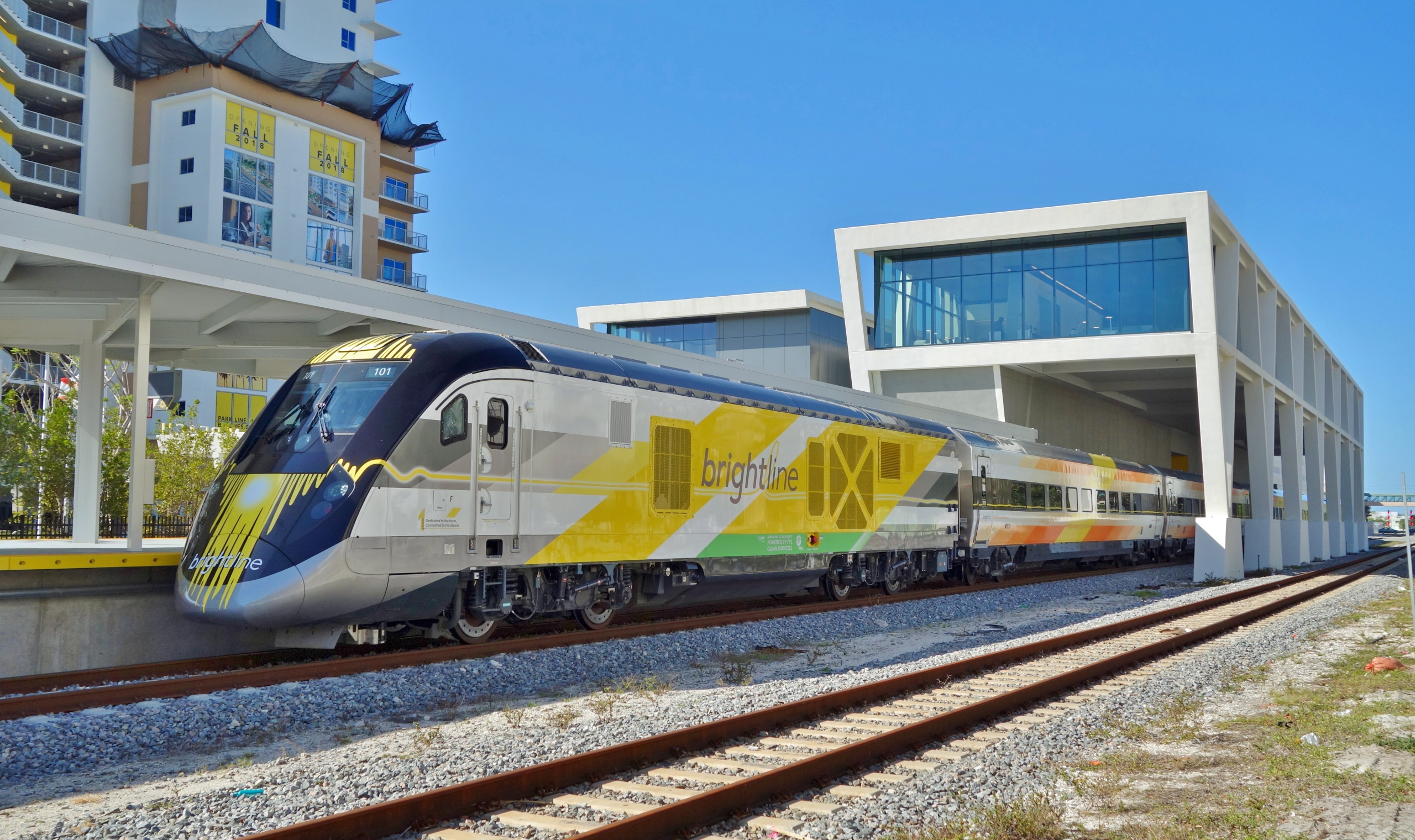 For the first time in fifty years, America has an intercity passenger railroad worthy of pride. In the heart of downtown Miami stands the shining new MiamiCentral Station, the southern terminus of Brightline—a private railroad linking Florida’s largest city with Fort Lauderdale and West Palm Beach.

A journey on Brightline is quite a departure from the experience American rail users are used to. Inside MiamiCentral station is a modern atrium with helpful staff, food and drink outlets, bright digital displays, a kids’ play area, and fully stocked lounges for ticketed passengers. Once your train arrives, you are whisked up to the elevated platforms for a smooth journey over carefully rebuilt tracks on a brand-new high-speed train with spacious seating and an airline-style snack and beverage service. Passengers traveling in the “Select” class even get a hot towel. You reach Fort Lauderdale in less than thirty minutes and West Palm Beach in less than an hour.

Contrast that with my journey from Cleveland to Buffalo on Amtrak’s Lake Shore Limited. I had to get up early because the train was scheduled to depart at 5:35 a.m. from Cleveland’s Lakefront station, a stop along its painfully slow twenty-hour journey from Chicago to New York. Lakefront, despite being close to downtown, is barely accessible by any means but car; the only walking route is alongside a freeway ramp. The station consists of little more than a strip of concrete and a small hut. Cleveland Metro trains whistle straight past it without stopping. 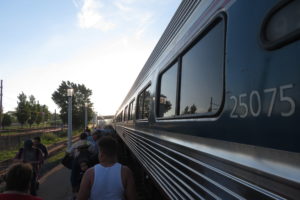 The line to board the delayed Lake Shore Limited at Cleveland.

In the end, my early start was unnecessary; the train was more than an hour late. I was escorted across the busy tracks of the metro and several hundred yards down a bare platform to board via a single open door. There, the train attendant issued each passenger a seat number. No advanced seat selection on Amtrak—just a randomly assigned piece of paper before you ascend the steep steps into the coach.

Editor’s note: This article was initially published without footnote number nine, which addresses some criticisms against Brightline.

View all articles by Thomas Walker-Werth →
Letter to the Editor
‘Representation and Inclusion Standards’: The End of the OscarsWall Street (1987), by Stanley Weiser and Oliver Stone

3 Richard Hall, “The Slow Train to South Bend: What an Amtrak Ride to Pete Buttigieg’s Home Town Taught Me about America’s Railroads,” The Independent, March 4, 2021, https://www.independent.co.uk/news/world/americas/us-politics/pete-buttigieg-south-bend-amtrak-transport-b1812129.html.

8 Alan Ohnsman and Antoine Gara, “Inside a Wall Street Tycoon’s Plans to Get Americans off the Highway—and onto His Trains,” Forbes, June 11, 2020, https://www.forbes.com/sites/alanohnsman/2020/06/11/inside-a-wall-street-tycoons-plan-to-get-americans-off-the-highway---and-on-his-trains.

9Brightline obtained funding for the Florida project through private activity bonds, drawing criticism from some, including the governments of Indian River and Martin counties. These bonds are a vehicle by which government agencies obtain credit from private investors on behalf of another private company in order to finance a construction project that the government considers to be in the “public interest.” The recipients of private activity bonds get this credit tax-free and these bonds exempt from credit rating requirements. Brightline is solely liable for the repayment of its debt. It did benefit from the tax-exempt nature of this debt and may not have been able to raise sufficient funding without it. However, so far as I can tell, it did not benefit—or seek to benefit—from unjust government favors. Those involved merely sought to keep their money from being forcibly taxed by government. For more on how societies could operate without forced taxation, see Craig Biddle, “How Would Government Be Funded in a Free Society?,” The Objective Standard, 7, no. 2 (Summer 2012), https://theobjectivestandard.com/2012/05/how-would-govt/.
The Environmental Improvement & Energy Resources Authority (EIERA) information page on private activity bonds notes that “Private activity bonds are repaid solely by the entity for which the EIERA issues the bonds. The EIERA is not liable for repayment of the principal or interest due on the bonds.” See Environmental Improvement & Energy Resources Authority, “Private Activity Bonds,” https://eiera.mo.gov/other-financing/(accessed May 15, 2021);
For more on this topic, see Melissa Halsman in TCPalm, who notes “The project is 100% privately financed, company officials stated, and represents a total investment of $4 billion.” See Melissa E. Halsman, “Virgin Trains Sells $1.75 Billion in Private Activity Bonds for Expansion to Orlando,” TCPalm, April 22, 2019,
https://eu.tcpalm.com/story/news/local/shaping-our-future/all-aboard-florida/2019/04/22/virgin-trains-sell-private-activity-bonds-expansion-orlando/3539297002/. Note that, at the time, Brightline was doing business as Virgin Trains USA.

11 Richard Hall, “The Slow Train to South Bend: What an Amtrak Ride to Pete Buttigieg’s Home Town Taught Me about America’s Railroads,” The Independent, March 4, 2021, https://www.independent.co.uk/news/world/americas/us-politics/pete-buttigieg-south-bend-amtrak-transport-b1812129.html.