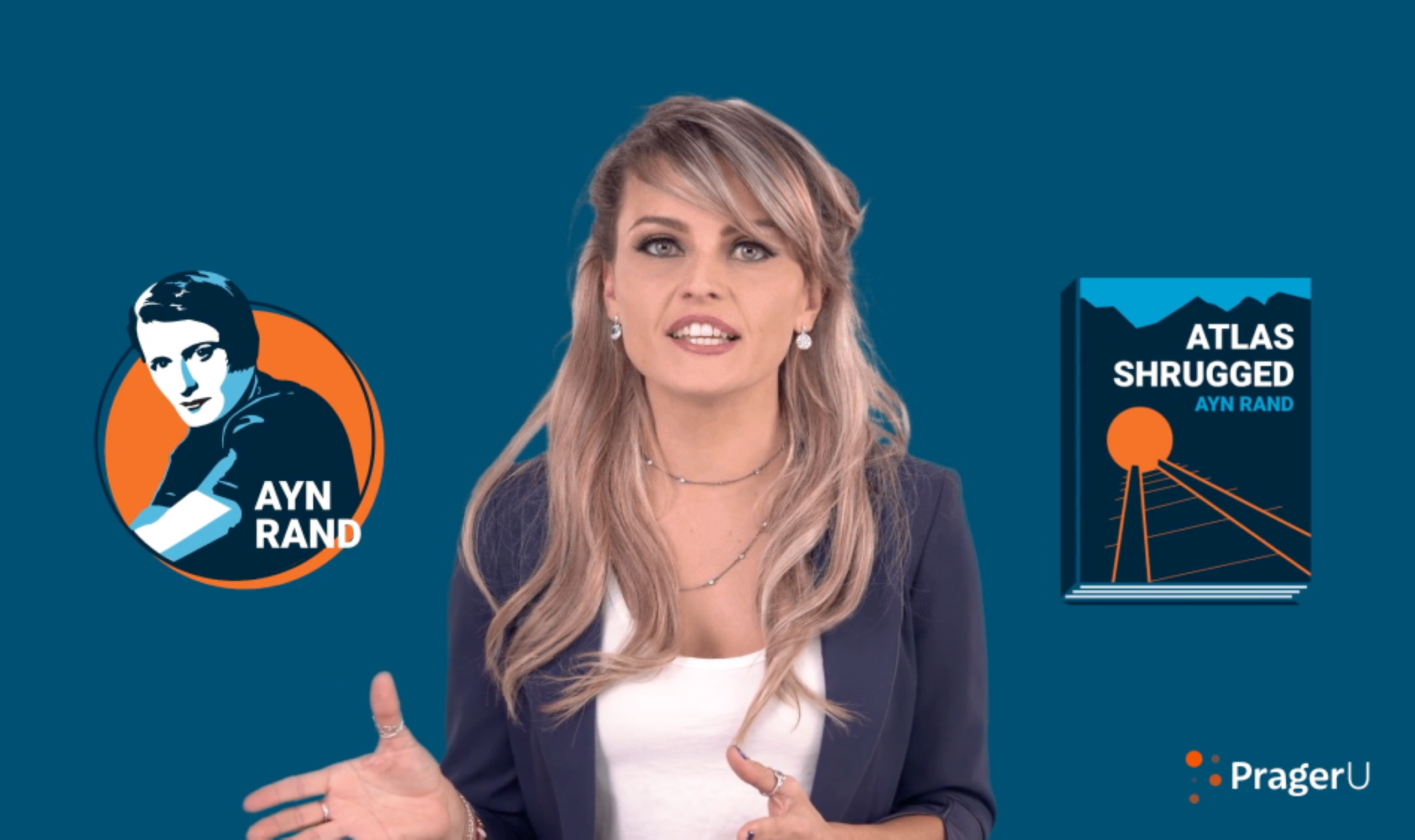 On Monday, PragerU posted a new five-minute video, titled “Understanding Ayn Rand,” and it instantly went viral. As of this writing, it has more than a million views—in just five days.

The video, which is brilliantly narrated by Gloria Álvarez, was sponsored by Objective Standard Institute, and the script was co-authored by PragerU’s and OSI’s writers, with help from Gloria. You can view it below or on YouTube.

For those who are interested in how this video came to be and why we are so excited about it, here’s the backstory. . .

I’ve long wanted to engage with Dennis Prager about the source and nature of morality, as he has often claimed that “without God, there is no objective morality.” Many people hold this view, and it’s understandable that they do—unless they already understand the truth of Ayn Rand’s principle that the requirements of man’s life constitute the objective standard of morality. And few people know anything about that. This is why I really wanted to engage with Dennis, and preferably in a way that would reach PragerU’s sizable audience—65 percent of which is under the age of thirty four.

About a year ago, my friend Jason Bateman, who had just begun working at PragerU, contacted me to ask whether I’d be interested in helping them to create a five-minute video on Rand’s ideas. Of course I said yes. And this rolled into a number of related projects, including my recent Fireside Chat with Dennis, “A Dialogue about God and Ayn Rand.”

It’s been a pleasure working with Dennis, Jason, Gloria, Allen Estrin, and the whole crew at PragerU. They clearly appreciate Rand as a thinker. They want their audience to know about her ideas and how they relate to freedom, capitalism, and American exceptionalism. And they wanted to present her ideas accurately. Team OSI was happy to oblige. And everything has gone beautifully.

Of course, the goal of this video was not to teach people Rand’s philosophy in five minutes. That would be impossible. Rather, our aim was to inspire people to look further into Rand’s ideas, and especially to read Atlas Shrugged.

Toward that end, we worked to develop a script that met PragerU’s viewers at their context, appealed to their values, and created some intrigue around Rand’s ideas and the novel.

The video opens as follows:

“Who is John Galt?” This is one of the most famous questions in modern literature. Even today, over fifty years after it was written, you’ll hear people asking it.

Because it recalls the riveting suspense story, heroic characters, and powerful ideas portrayed in the bestselling novel Atlas Shrugged, by Ayn Rand.

Born in St. Petersburg, Russia on February 2, 1905, Rand became one the most celebrated authors and philosophers of the 20th century. Her most famous novels, The Fountainhead and Atlas Shrugged, still sell hundreds of thousands of copies every year around the world.

Rand lived through the early years of the Russian Revolution, saw her father’s pharmacy business confiscated by the Bolsheviks, and experienced the horrors of communism firsthand.

She longed to emigrate to America. In 1926, she did—and never looked back.

That brief biographical material provides context and sets the stage for a discussion of Rand’s ideas. Because PragerU’s viewers generally love America, freedom, and the Founders, we highlighted Rand’s views on these values—including her vital connection between individual rights and the principle of non-sacrifice:

To Rand, the United States meant freedom. She saw the founding fathers as heroes. They created a country based on individual rights. “Man’s right to his own life, to his own liberty, to the pursuit of his own happiness,” she said, means that every individual has a “right to exist for his own sake, neither sacrificing himself to others nor sacrificing others to himself”—nor to the government.

Because PragerU’s viewers generally love the wealth and prosperity that America’s relative freedom and private sector have made possible, we quoted Rand to this effect as well:

The practical results of the American system, Rand said, could be seen in the skyline of New York City. “America’s skyscrapers,” she noted, “were not built by public funds nor for a public purpose: they were built by the energy, initiative, and wealth of private individuals for personal profit. And, instead of impoverishing the people, these skyscrapers, as they rose higher and higher, kept raising the people’s standard of living.”

PragerU’s viewers generally want to support free markets and capitalism, and they generally oppose economic controls and statism, so we pointed out that

Rand advocated pure capitalism, which she described as a system in which “the government acts only as a policeman that protects man’s rights.” No bailouts, no special favors for big business, no government intervention into the economy. When people are free to produce and trade, and when the government is limited to protecting rights, everyone benefits. Individuals thrive. Societies prosper.

We then point to some vivid historic facts that support this:

How do we know this? Compare freer, more capitalist societies to less free, more statist ones. In Rand’s day: America compared to the Soviet Union, West Germany to East Germany. More recently: South Korea to North Korea, Colombia to Venezuela.

Such differences were painfully obvious to Rand. So were their causes.

Here, the video turns to a political-economic theme of Atlas—and some mystery:

In Atlas Shrugged, she showed how easily a free society can collapse into a dictatorship. The heroine, Dagny Taggart, works tirelessly and brilliantly to save her family’s railroad business, while ever-increasing government interventions destroy businesses and crush the economy.

Meanwhile, one by one, the top producers across various industries mysteriously disappear. No one knows where they have gone. The only clue is a question they leave behind: Who is John Galt?

As the economy crumbles, how do politicians, bureaucrats, and academics react? They blame “the greedy businessman” and decry the profit motive and free markets. Their solution: more government intervention which, of course, only makes the problem worse.

Of course, Atlas is not fundamentally about politics, so the video goes deeper:

Atlas Shrugged is a cautionary tale about pursuing equality over excellence—state control over free markets—but it’s also about the power of the individual and the power of reason.

The individual’s reasoning mind, Rand argued, is his tool of knowledge—his only means of understanding what is true or false, how the world works, what is good or bad for his life.

This is the theme of Rand’s work more broadly: In order to thrive, to achieve happiness, the individual must think for himself and live by the judgment of his own mind.

Those paragraphs go to the very core of Objectivism: The individual’s reasoning mind is his only means of knowledge, and in order to live and prosper he must use his mind and act on his own judgment.

That point segues into why freedom and capitalism are moral:

To do this people must be free—free to voluntarily exchange ideas, goods, and services for mutual benefit; free to speak their minds without fear. For this, she regarded capitalism not only as the best, but as the only moral social system.

I love Rand’s focus on the positive here: Capitalism is about “independence, self-confidence, self-reliance”—not about expecting or demanding the unearned.

Is this the system America lives under now? No, said Rand. She called capitalism the “unknown ideal” because it has never been fully implemented, even in America.

The video ends where it began, with an implicit yet strong call to action:

Ayn Rand’s ideas on capitalism, individualism, and reason have attracted millions of people to her novels, essays and lectures. And still do.

Who is John Galt?

I couldn’t be happier with this video or the process of working with PragerU to make it. And the fact that it has been viewed by more than a million people in less than a week—and that 65 percent of these viewers are under the age of thirty four—is music to my soul.

This project is an instance of Objective Standard Institute’s value-up approach to advancing Objectivism. It’s one of the many ways in which we are strategically reaching young minds. And we’re just getting started.

Check out the video below. Or, better yet, visit the YouTube page and take a look at all of the positive comments about Rand, Atlas Shrugged, and Objectivism. I think they’ll brighten your day. And I think they demonstrate the value of presenting Rand’s ideas to new audiences who are willing to engage their minds.

View all articles by Craig Biddle →
Celebrating Progress and Combating Complacency: An Interview with Virginia PostrelHeard the news? TOS-Con’s early-bird discounts have been extended!
Return to Top