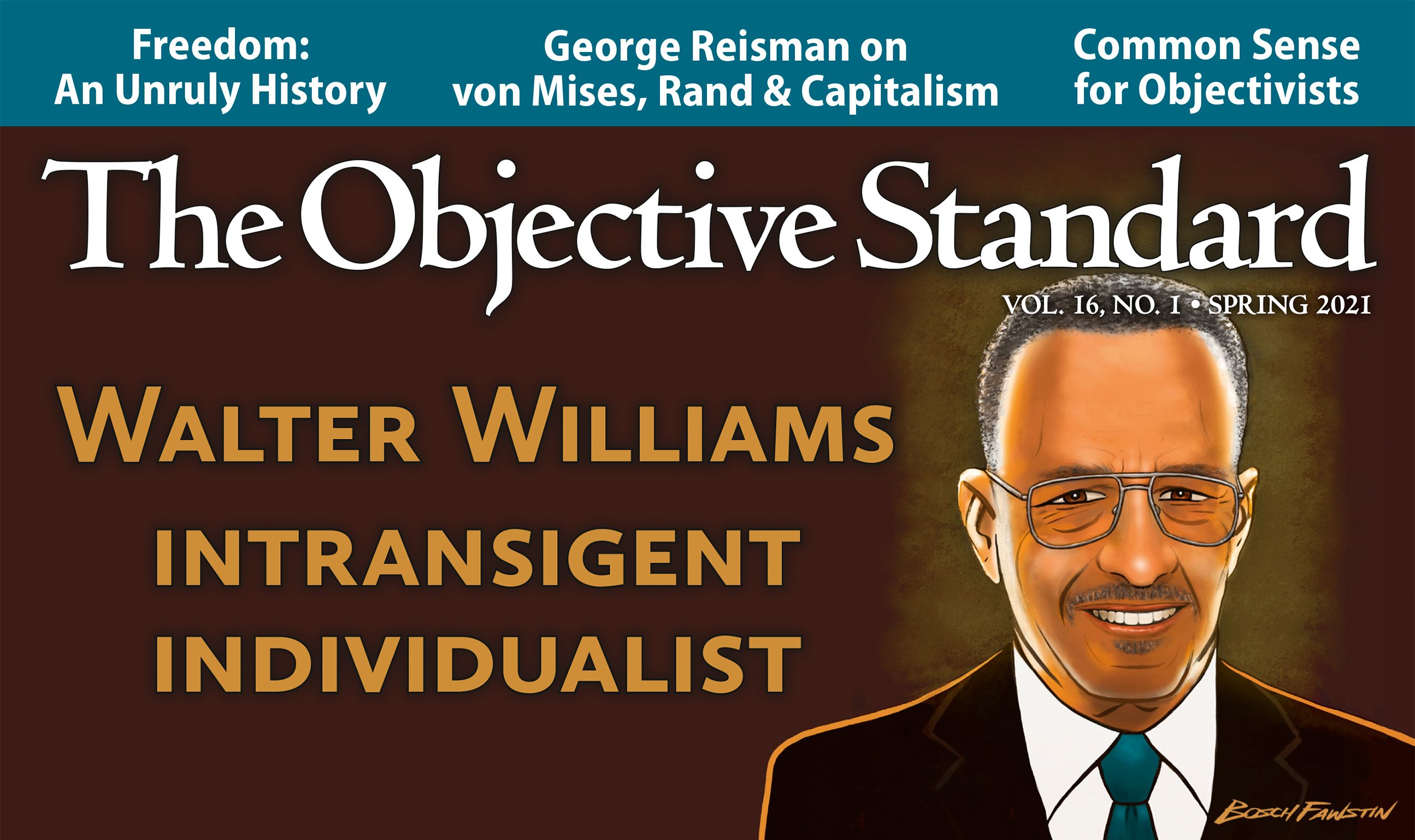 Welcome to the Spring 2021 issue of The Objective Standard.

This issue begins our sixteenth year of publication and includes articles by twelve authors. The unusually large number of contributors is due in part to the writing courses that Jon Hersey and I have been teaching at TOS’s sister organization, the new, nonprofit Objective Standard Institute (OSI).

Since OSI launched last summer, Jon and I have taught multiple cohorts of two writing courses: “How to Write Powerfully in Defense of Liberty” and “Advanced Writing Workshop: Lead People to Liberty.” More than seventy distinct students have taken these courses. Nine of them have articles in this issue of TOS. Several have had articles published in other venues. Many more have articles in TOS’s pipeline or other pipelines. And enrollment in OSI’s writing courses continues to grow.

As Ayn Rand observed, “A culture is made—or destroyed—by its articulate voices.” TOS and OSI are working to multiply the articulate voices of reason in our culture. And we couldn’t do it without your business and support. So, thank you, TOS subscribers, for your business. Your patronage keeps us going and growing. And thank you, supporters of OSI. Your contributions helped get the institute off the ground, and your continued support will enable OSI to teach the rising generation about the importance of philosophy, the principles of Objectivism, and how to communicate with clarity and impact.

(For readers who may be hearing about OSI for the first time, you can learn more about the institute’s courses, conferences, and podcasts at ObjectiveStandard.org.)

Now, to the contents of the sixty-first issue of The Objective Standard . . .

In “Walter Williams: Intransigent Individualist,” Aaron Briley surveys the life and achievements of this exceptional man. As Briley puts it, Williams’s “courageous life story, from the Richard Allen housing project in Philadelphia to the lecture halls of George Mason University, reinforces the ideas Williams spent his life promoting: Government interventions in the economy are destructive and immoral; freedom, more than any other factor, enables social mobility; and capitalism is the only moral economic system.” Briley’s article is a fitting tribute to this late American hero.

In “Common Sense for Objectivists: Five Reasons for Fans of Ayn Rand to Study Thomas Reid,” Jon Hersey examines the fascinating parallels between the ideas of Ayn Rand and those of Thomas Reid, a little-known philosopher of the Scottish Enlightenment who founded the school of epistemology known as common-sense realism. As Hersey shows, Reid is not only “an excellent foil against which to compare and better understand Rand’s views,” but his “fierce wit, clear exposition of philosophic problems, and insightful solutions make him a thinker worth reading in his own right.”

Next up is Jim Brown’s interview with George Reisman, author of Capitalism: A Treatise on Economics, professor emeritus of economics at Pepperdine University, and one of the greatest living advocates of capitalism. Reisman discusses his early intellectual development, including how he met both Ayn Rand and Ludwig von Mises, under whom he studied for several years.

Letters to the editor include:

That’s it for this issue. I hope you enjoy it. And be sure to let your friends know about the journal for people of reason. A mind is a beautiful thing to use. —Craig Biddle

Welcome to the Spring 2021 issue of @TheObjStd. Features include “Walter Williams: Intransigent Individualist,” by @aaronbriley, “Common Sense for Objectivists” by @revivingreason, and more.
Click To Tweet

View all articles by Craig Biddle →
Letter to the Editor
God vs. Ayn Rand: A Fireside Chat with Dennis Prager and Craig BiddleCommon Sense for Objectivists: Five Reasons for Fans of Ayn Rand to Study Thomas Reid
Return to Top