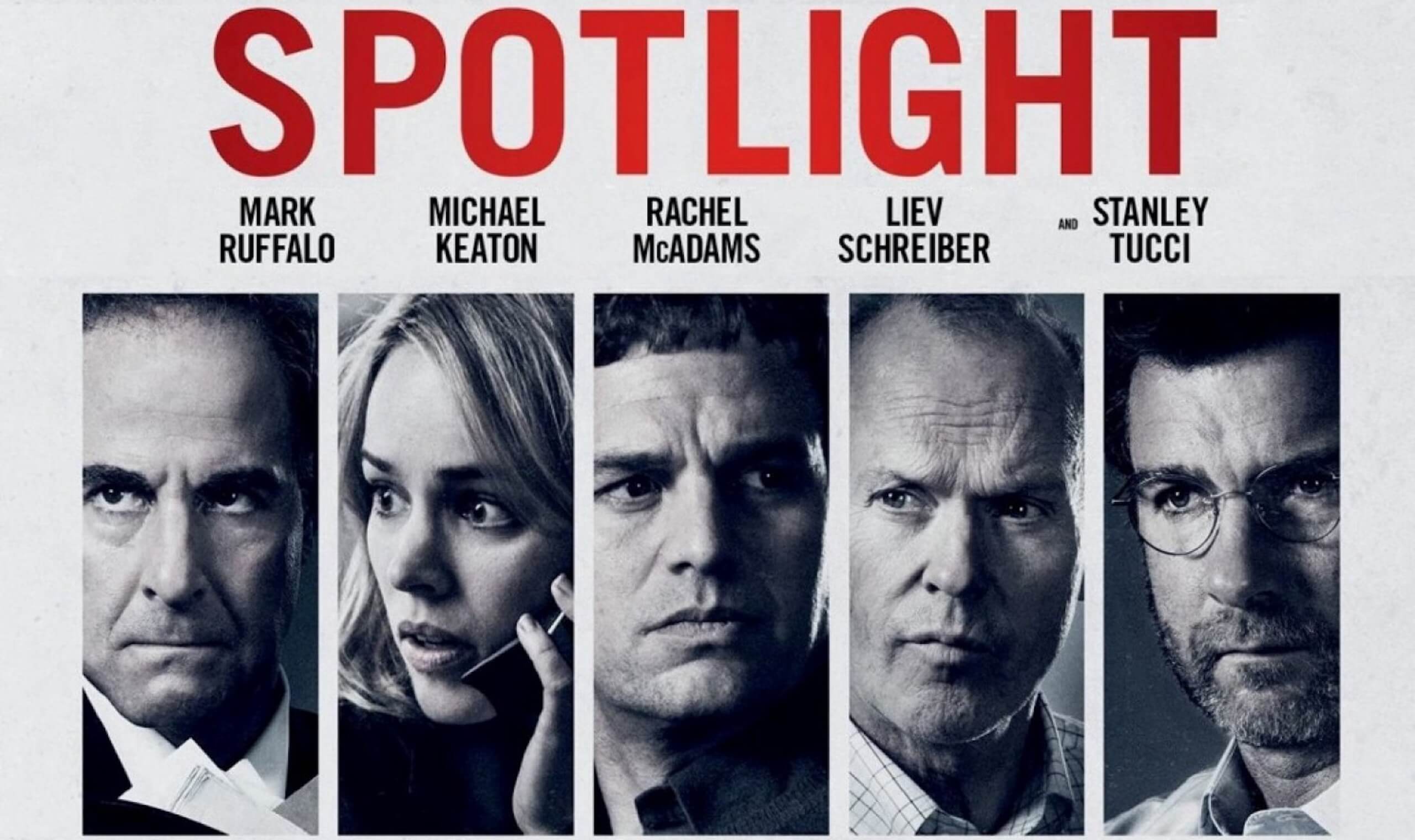 The 2015 docudrama Spotlight tells the mostly true story of the Boston Globe investigative journalism team who revealed in 2002 that high-ranking officials in the Catholic Church had been knowingly protecting child-abusing priests for decades. Tightly written and powerfully acted, the film highlights the tremendous power of objective journalism and the inspiring heroism of the few journalists who remain committed to it.

The film opens in 1976 after Father John Geoghan, a Catholic priest, is arrested for molesting two brothers (the real-life Geoghan is believed to have molested more than 130 boys over a span of thirty years). A high-ranking cleric persuades the victims’ mother not to tell anyone about the abuse. Meanwhile, the local assistant district attorney, who seems to be acting on behalf of the church, declines to charge Geoghan and pressures the police investigators to let it go. The case quietly disappears.

Twenty-five years later, in 2001, Marty Baron (Liev Schreiber) takes over as the new editor in chief of the Boston Globe and asks its legendary investigative team, code-named “Spotlight,” to look into a long-standing pattern of child abuse allegations against Catholic priests. Initially believing that they are investigating only thirteen priests, the Spotlight reporters gradually uncover evidence incriminating nearly one hundred priests in the Boston area alone. They also discover that Cardinal Bernard Law, the archbishop of the Boston diocese, has known about the widespread abuse for decades and has been shielding the offenders from prosecution.

Throughout the film’s two-hour running time, the three Spotlight reporters and their editor, Walter “Robby” Robinson (Michael Keaton), pursue the story with determination and unshakable integrity, refusing to back down in the face of the church’s intimidation tactics. Baron rejects a bribe from Law, and one of the reporters, Sacha Pfeiffer (Rachel McAdams), a lifelong Catholic, renounces her faith and swears allegiance to the truth once she begins to understand the horrifying scope of the church’s crimes against children.

In one particularly powerful scene, Robinson fiercely debates one of his subordinates, Michael Rezendes (Mark Ruffalo), over when they should publish their findings. Rezendes wants to publish strong evidence against the abusive priests before more children are victimized, but Robinson maintains that if they run the story without equally strong evidence against the church’s leaders, those leaders will again sweep the abuse allegations under the rug. The scene ends with both men in tears, each understanding the other’s position but sure of his own.

At the end of the film, Robinson demonstrates his integrity by proactively disclosing a major mistake he made. Eight years earlier, a man who had been abused by a priest when he was a child sent evidence to the Metro section of the Globe incriminating several of the priests the team is now naming in its 2001–2002 investigation. Robinson was the Metro editor at the time, but he never followed up on the abuse allegations because he was overwhelmed with other stories.

In all likelihood, had he not broached the topic himself, no one else would have discovered that Robinson might have been able to break the story years earlier and thus save hundreds of children from being abused. But he clearly understands both the true meanings and the critical importance of integrity and credibility, particularly for journalists. He knows that if he openly admits to a serious mistake before someone else finds out about it, people who are concerned with the truth will be more, not less, likely to trust him. Baron and the rest of the Spotlight team commend Robinson for his honesty and reassure him that they’ll have his back, even if his revelation weakens the story in the eyes of the public.

In real life, Robinson and his team didn’t learn about the earlier Globe tip until the film’s writers discovered it during the course of their research; another Metro staff member received and eventually filed it. Robinson had been in charge of that department at the time and arguably should have seen the tip at some point. When the filmmakers brought it to his attention, he accepted responsibility for this oversight.1

Spotlight deserves praise not only for its writing, acting, and inspiring portrayal of pro-life values, but also for its historical accuracy. In a few instances, the film’s writers take minor creative liberties for the sake of drama, but for the most part, they tell the story as it really happened, according to Wikipedia.2 Viewers witness the Spotlight reporters battle exhaustion, death threats, and indignant Catholic Bostonians as they work many sixteen-hour days for more than a year. Despite the toll that the investigation takes on them and their families, they persevere in defense of truth and justice. Eventually, their hard work leads to the criminal convictions of six Boston-area priests and sparks a global investigation into the Catholic Church’s involvement in sex crimes against children.

If Spotlight were purely a work of fiction, it would still be incredible and inspiring, but it’s even more so because it’s a true story of real heroes. In today’s world, where the vast majority of “journalism” ranks somewhere between inaccurate and blatantly nonobjective, we desperately need heartening reminders of how evidence-based reporting can promote life-sustaining values—and even directly save lives. Spotlight is an exceptionally well-made film that poignantly showcases the power of good to triumph over evil.

#Spotlight highlights the tremendous power of objective journalism and the inspiring heroism of the few journalists who remain committed to it.
Click To Tweet

View all articles by Tim White →
Life in No-Lockdown SwedenThe Property Species: Mine, Yours, and the Human Mind by Bart J. Wilson