How Travel Can Foster a Personal Renaissance - The Objective Standard 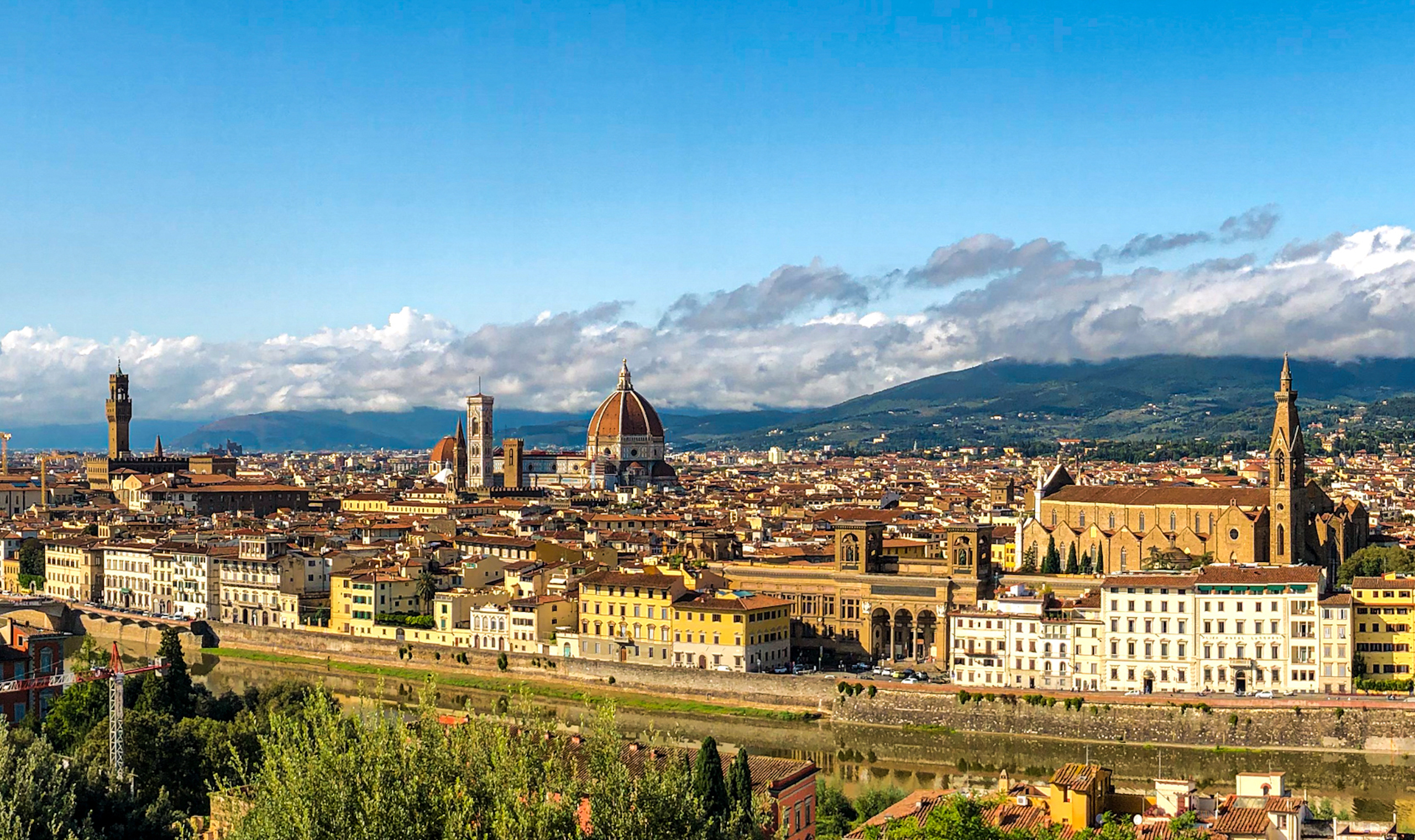 How Travel Can Foster a Personal Renaissance

Quit your home in town, and leave your family and friends, and go over the mountains and valleys into the country.1 —Leonardo da Vinci

I now know what people mean when they say that travel can improve your life considerably.

When I was a teen, my sister told me about an Italian artist and unique polymath who lived during the Renaissance: Leonardo da Vinci. Intrigued, I began reading about this staggeringly versatile man and visionary inventor, whose copious notebooks reveal that he studied everything from architecture to geology to aeronautics. I recognized his world-famous masterpieces, the Mona Lisa and the Last Supper, from pop-art parodies, and I vowed to one day visit his homeland.

But as the decades passed, my initial fascination with da Vinci gradually faded, and I shelved the trip idea. That was until I read Walter Isaacson’s 2017 biography Leonardo da Vinci. Reading about da Vinci anew reminded me of the incredible and inspiring depth in which he studied many disciplines, as well as the many ways in which he influenced me. For instance, da Vinci’s example inspired my lifelong devotion to self-education in a variety of disciplines and taught me the importance of paying attention to subtle details. These traits, in turn, have fueled my career as a journalist and photographer.

Shortly after publishing a review of Isaacson’s book, I finally got to view an original da Vinci painting, the emotionally charged and anatomically precise but unfinished Saint Jerome Praying in the Wilderness, on loan from the Vatican at the Metropolitan Museum of Art in my native New York City.

A few months later, in September 2019, I fulfilled my youthful vow. I flew to Italy for the five-hundredth anniversary of da Vinci’s death. I traveled from city to city viewing his work at commemorative exhibits and events held throughout his homeland. At Florence’s Uffizi Gallery, I got to see some of his earliest paintings, his first solo work Annunciation and the incomplete yet groundbreaking Adoration of the Magi. Also at the Uffizi, I saw The Baptism of Christ by his mentor, Andrea del Verrocchio, to which the young da Vinci contributed the angel (at the far left), the background landscape, and other details. The Pinacoteca Ambrosiana in Milan featured an exhibit of sketches from his Codex Atlanticus notebook, where I viewed his incomplete Portrait of a Musician; the Palazzo Zaguri in Venice hosted an exhibit of models based on his anatomical studies; and the Museo Galileo in Florence held a multimedia display of his book collection. The highlight was viewing his masterful Last Supper mural in the convent-church Santa Maria delle Grazie in Milan.

I once found it difficult to relate to the excitement travelers expressed at walking the same streets their heroes did centuries earlier. Not so after walking through cities where a hero of mine revolutionized art and science. My curiosity irresistibly abounded: What were Florence and Milan like when da Vinci roamed their streets seeking expressive faces and gestures to sketch? How much from that age remains? How exactly did he live, work, and create in these cities? How did they shape him and vice versa? I’ve come to see that learning about heroes can inspire you to travel to where they lived and that such trips can catalyze even deeper curiosity—as well as a passion for putting their life-serving ideas to use.

Back home, I immersed myself in books, articles, videos, and documentaries about da Vinci and his native land, and I found myself hanging on each sentence as if absorbed in an engaging mystery novel—anticipating ever new clues, evidence, and perspectives and uncovering deeper insights, generating greater awe, and spurring deeper research and integration.

Rediscovering da Vinci has rekindled my romance with books and given me a supremely inspiring hero to write passionately about. I’m also learning a lot while editing and adding informative captions to the ten thousand photos and videos I shot in Italy (some of my photos accompany this article, and you can see more on my website and Instagram account). My trip even inspired me to pen a travelogue and to start writing in-depth about da Vinci, including about how some of his ideas, methodologies, and creative processes integrate nicely with the philosophy I’ve adopted, Ayn Rand’s Objectivism.

In sum, rediscovering da Vinci and traveling to his homeland has helped reconnect me to my youth and my intellectual awakening. This has helped me to put into perspective all that I’ve learned since then, to reassess and reorganize my hierarchy of values, and to work toward my career goal of integrating my love of reading, writing, and photography. Consequently, I’m reenergized with a clearer conception of my central purpose and ideas for achieving it.

Of course, such a travel-induced personal renaissance is not unique to me. For instance, Lisa VanDamme, a literature enthusiast and founder of VanDamme Academy, has spoken about a trip she took to England to learn more about the 19th-century Romantic poet John Keats. She described it as “an experience of dazzling, whirlwind bliss,” the culmination of which was visiting Keats’s house. There, she entered with “a vague, fleeting knowledge of Keats’s life story” but was stirred by a tour guide exuding a heartfelt passion for Keats. She characterized the experience as “magical,” and it inspired her to one day give a talk and read from the work of her beloved poet at his home.2

Similarly, Jon Hersey, associate editor of The Objective Standard, told me about a road trip he took to Monticello, the Virginia home and estate of Thomas Jefferson. He decided to visit during Fourth of July weekend after publishing a profile he wrote about Jefferson. “It was a fantastic experience, walking through the rooms that one of history’s greatest heroes designed and lived in,” said Hersey. He saw the desk at which Jefferson composed letters to James Madison, John Adams, and George Washington, among others. He saw the dining room where Jefferson entertained the great Revolutionary War hero, Marquis de Lafayette. Hersey said, “The trip helped me to further grasp that Jefferson’s achievements were not the work of some mythical being but of a man, a man whose virtues I—and anyone—can emulate.”

If you desire to cultivate similarly rejuvenating, potentially life-changing experiences, the first step is to take an introspective inventory of your heroes. In particular, contemplate the attributes that initially attracted you to them, and identify their deeper and enduring influences on your values, actions, and accomplishments. To bolster this quest, seek out in-depth biographies or documentaries about them and anticipate uncovering new and inspiring stories and revelations.

Once you’ve steeped yourself in stories of your hero’s accomplishments, you will be better able to choose the most appropriate travel destinations. Focus on places you think will best connect you with them, perhaps where they performed at their peak and achieved feats that most inspire you. These may be homes where they penned immortal literature or political documents, stadiums where they played their best games, cities featuring their innovative architecture, labs where they discovered cures for diseases, mountain peaks they scaled with great daring, towns where crowds gathered to hear their stirring speeches, battlefields where they fought for liberty over tyranny, or galleries that house their artistic masterpieces.

Plan trips expecting to discover interesting facts about your heroes, anticipating that such revelations may spark intriguing new avenues to explore. When I researched an aesthetically pleasing church I’d happened upon in Milan, I learned that da Vinci’s friend, Donato Bramante, was its architect and that da Vinci possibly was associated with its confraternity. With such possibilities in mind during your travels, snap photos and record observations (whether in a notebook or a dictation app) of subjects that pique your interest. Back home, consider transforming your images, notes, and memories into something lasting and meaningful. Doing so will foster a deeper connection with your heroes and the places they lived and worked.

Taking these measures will raise your chances of generating spiritual fuel and reigniting your passion for pursuing your most cherished values. Happy travels!

I once found it difficult to relate to the excitement travelers expressed at walking the same streets their heroes did centuries earlier. Not so after walking through cities where a hero of mine revolutionized art and science.
Click To Tweet