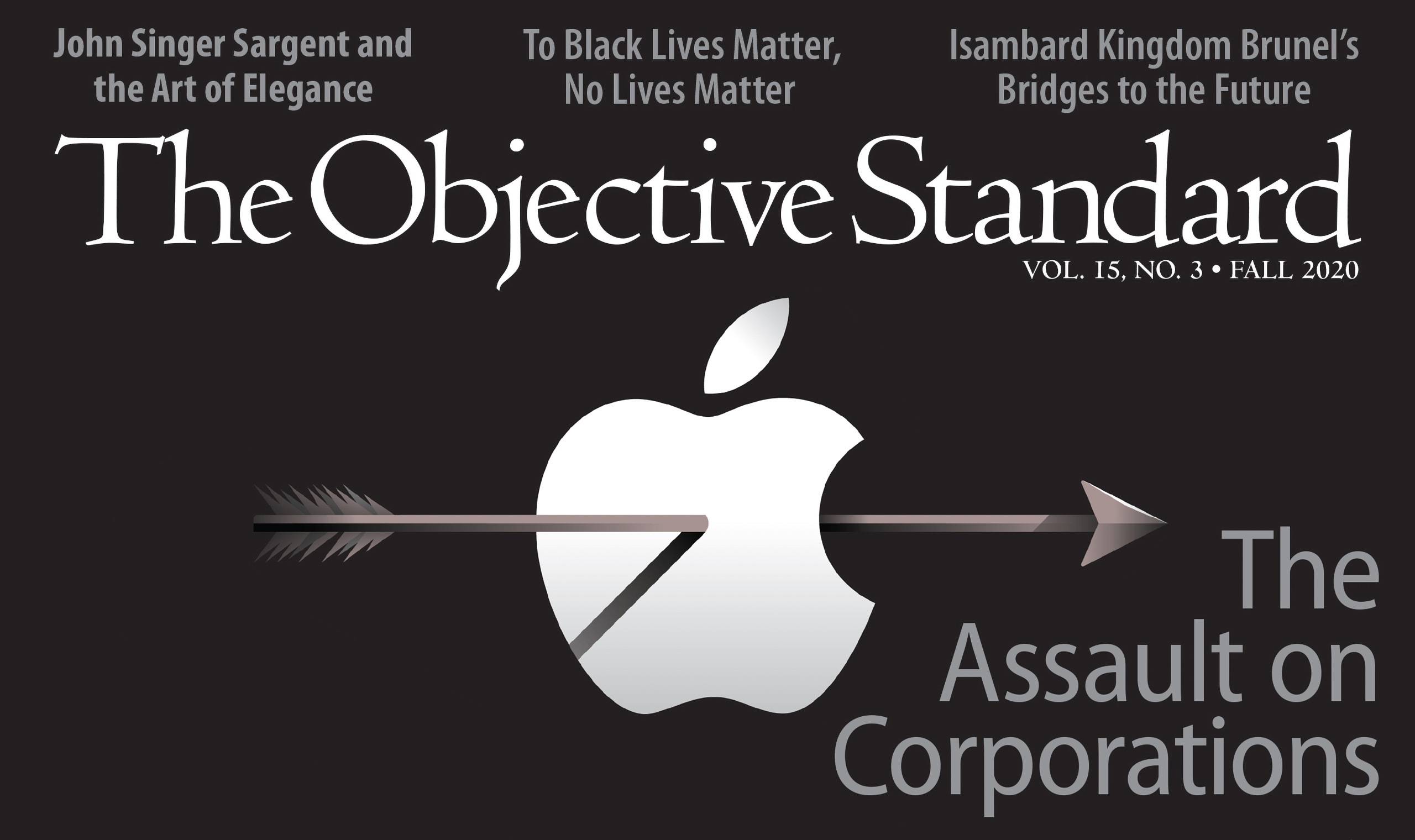 Welcome to the Fall 2020 issue of The Objective Standard.

The issue has been published online, the ebook and audio versions will be posted by Tuesday, and the print edition will be mailed in the first week of September. You can subscribe or renew your subscription here. (Back issues can be purchased here.)

First up, in “The Assault on Corporations,” Michael Dahlen shines much-needed light on the nature and value of the corporate legal structure, the difference between economic power and political power, and the abysmally bad thinking that leftists and conservatives use to smear, throttle, and thwart producers of the values on which our lives and happiness depend.

Next, in “John Singer Sargent and the Art of Elegance,” Timothy Sandefur celebrates the life and work of this great 19th-century portraitist, who created “a world of spontaneity, glamour, and joy.” The article is accompanied by thirty-seven full-color images of various artworks discussed.

In “Isambard Kingdom Brunel’s Bridges to the Future,” Thomas Walker tells the story of this engineering genius of Britain’s Industrial Revolution, many of whose bridges, rail lines, and other structures still stand today—and whom BBC viewers voted “the second greatest Briton of all time,” second only to Winston Churchill.

In “George Floyd, Revolutions, and the Path to Justice,” Jon Hersey examines rationalizations in support of the rioting, property destruction, and other rights-violations perpetrated by savages and encouraged by leftists following the obscenely unjust killing of George Floyd.

In “Ancient Wisdom for Modern Life: Five Lessons from Miyamoto Musashi’s ‘Way of the Warrior,’” Tim White examines the ideas of this legendary, 16th-century samurai, showing why his “somewhat abstruse lessons are as applicable today as ever.”

The books, TV shows, and video games reviewed in this issue are:

Enjoy the articles and reviews—and have a delightful autumn! —Craig Biddle

Welcome to the Fall 2020 issue of @TheObjStd. Features include “The Assault on Corporations” by @mike_dahlen, “John Singer Sargent and the Art of Elegance” by @TimothySandefur, and more.
Click To Tweet

View all articles by Craig Biddle →
To Black Lives Matter, No Lives MatterIsambard Kingdom Brunel’s Bridges to the Future
Return to Top