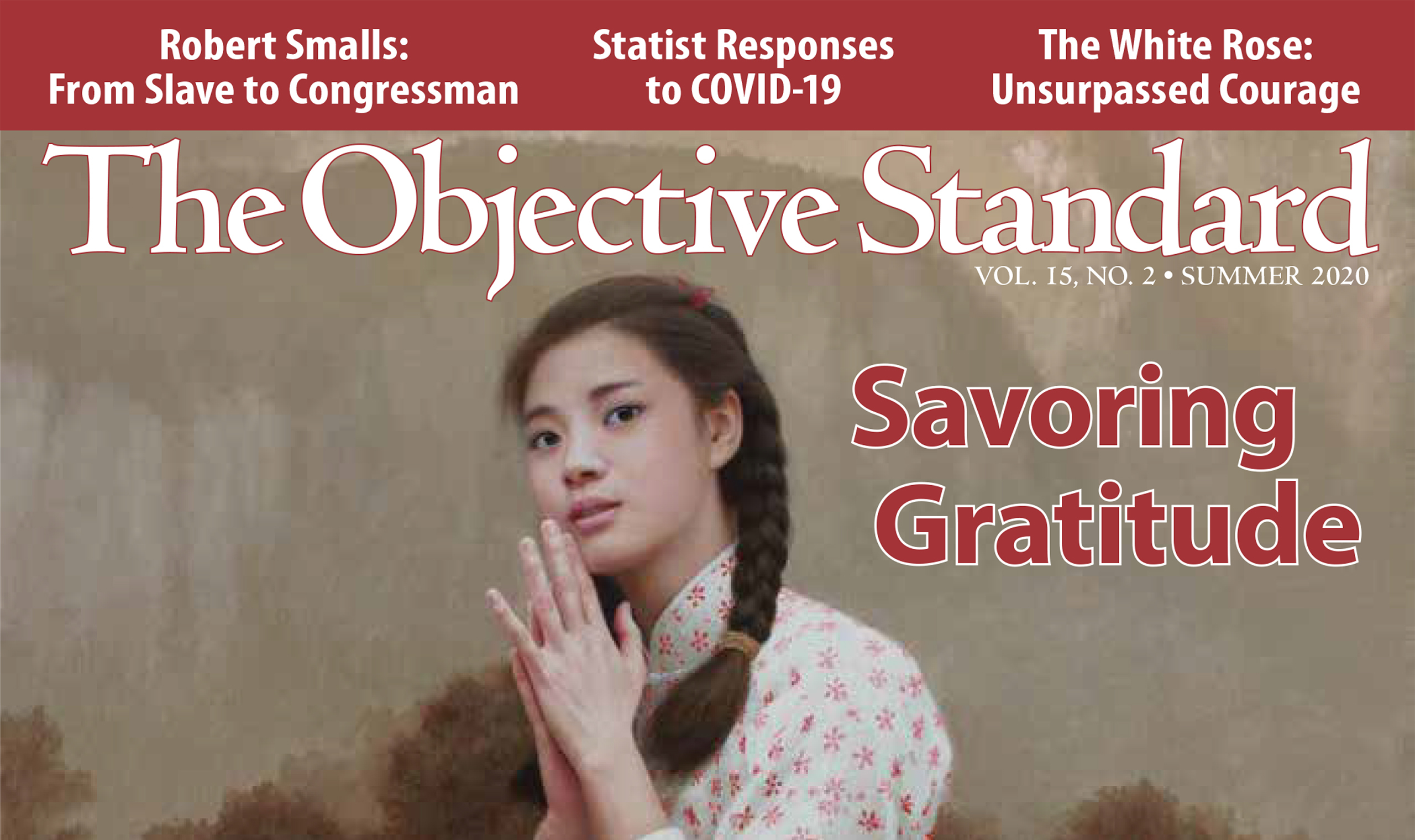 Welcome to the Summer 2020 issue of The Objective Standard.

The issue has been published online, the ebook and audio versions will be posted by Tuesday, and the print edition will be mailed in the first week of June. You can subscribe or renew your subscription here. (Back issues can be purchased here.)

We urge everyone to help expose and condemn these rights violations and to work for a future in which individuals’ reasoning minds—and the freedom to act in accordance with their judgment—are recognized and respected as the solutions to all problems. TOS’s fifteen-year archive provides many anchor articles on the nature, source, and application of rights, and we will continue publishing on the subject with respect to the current crisis.

This issue contains a few articles about the pandemic and statist responses to it. But we also want to provide a reprieve from the nightmare, so the issue focuses mostly on positive things. (One such positive is the beautiful cover art, Warmth of Hometown, by Han Wu Shen. Han, who immigrated to America in 2004, is currently trapped in Wuhan, China, where he and his wife were visiting family when the virus broke out and the borders were closed. If you enjoy this painting, visit Quent Cordair Fine Art, where you can see more of his work and purchase his paintings.)

First up, in the cover article, “How to Savor Gratitude and Disarm ‘Gratitude Traps,’” Ellen Kenner examines gratitude as both a concept and an emotion, discusses its importance in human relationships, unpacks a “package deal” in which contrary ideas are mashed together with those that properly come under the term gratitude, and warns against what she terms the “gratitude trap,” a destructive device made possible by acceptance of altruism. This is a great article to share with anyone who could benefit from clarity on the nature and importance of genuine gratitude.

Next, in “The White Rose: A Story of Unsurpassed Courage,” Andrew Bernstein tells the story of “a group of idealistic young Germans” who, at the height of the Nazi reign of terror, “rose to challenge Hitler’s regime.” Among other acts of supremely heroic courage, “They published a series of pamphlets that upheld, in ringing terms, love of freedom and a call to end Nazi brutality.” And “In reference to the moral purity of their cause, they dubbed themselves the ‘White Rose.’” This story, at once horrific and beautiful, highlights the capacity of human beings to stand for good even in the worst of circumstances.

In “‘The Earth Becomes My Throne’: Individualism in Metallica’s Black Album,” Thomas Walker surveys the lyrics, music, and ideas surrounding the band’s “ode to individualist ideals,” including “liberty, self-interest, personal development, and the importance of the reasoning mind.” Here’s a taste:

“Don’t Tread on Me” is the album’s clearest statement of its most pronounced theme: individualism. The title alludes to the Gadsden flag (which was hung in the studio during the recording sessions), and the song begins with a guitar rendition of the chorus of “America” from the musical West Side Story. The lyrics reference Patrick Henry’s famous “Give me liberty, or give me death!” speech and mirror a powerful metaphor offered by Benjamin Franklin in a 1775 letter. In it, he likened America’s vigilance in defense of individual rights to a timber rattlesnake, writing, “She never begins an attack, nor, when once engaged, ever surrenders.”

In “Robert Smalls: From Slave to War Hero, Entrepreneur, and Congressman,” Tim White tells the story of this profoundly American man who spearheaded one of the most brilliant escapes from slavery on record. He went on to wear many hats and “had much in common with many other heroes of history, such as Joan of Arc and Rosa Parks. Like them, Smalls refused to live as a victim.” Enjoy this beautiful tale of a man who “relished life and all it had to offer with a passion that, sadly, most people never attain.”

In “Miami Beach’s Art Deco Answer to the Great Depression,” Joseph Kellard writes about “the world’s greatest concentration of art deco buildings,” which

reflect a distinct era in American history—along with the can-do attitude that has defined the nation. From the Great Depression years through the 1940s, architects in the Miami area designed dominantly within the umbrella of styles now known as art deco, and some nine hundred structures in this genre remain. They rose amid economic hard times and evoked technological modernity, resilience, and optimism.

Next, in his interview with Jon Hersey on “Statist Responses to COVID-19,” Michael Fumento emphasizes, “We need to look at the suffering caused by lockdowns. People suffer when they get COVID-19, and they suffer when they’re thrown out of work and can’t eat. They suffer both ways.” Regardless of whether you agree with everything Fumento says, I think you’ll find his views on this crisis refreshing and his ideas mostly sound.

Andrew Bernstein joins Jon Hersey for an interview, as well—this one on a subject related to Bernstein’s latest book, Heroes, Legends, Champions: Why Heroism Matters. In the interview, which focuses on “How Heroes Improve Our Lives,” Bernstein explains that although heroes “generally are relegated to the field of popular culture, where they shine as secret agents, detectives, and costumed, super-powered champions”—and although historians and biographers “generally feel the need to ‘balance’ their account of a hero’s achievements with a detailed litany of his flaws”—the fact is that “human beings need heroes for inspirational value and for the practical, life-enhancing advances they bring about.”

The book and TV show reviews in this issue are:

That’s it for this issue. I hope you enjoy it—and I hope you have the best summer possible amid the lockdowns.

Speaking of the best summer possible, if you’ve not yet registered for TOS-Con 2020: Philosophy for Freedom and Flourishing, be sure to register soon. The conference is filling up despite the corona crisis—indeed, registration is higher now than it was at this time last year—and it appears that if we’re permitted to hold the event, it will be our largest, most action-packed conference to date. I hope to see you there!

Welcome to the Summer 2020 issue of The Objective Standard. I hope you enjoy it—and I hope you have the best summer possible amid the lockdowns.
Click To Tweet

View all articles by Craig Biddle →
How to Savor Gratitude and Disarm “Gratitude Traps”Ancient Wisdom for Modern Life: Five Lessons from Miyamoto Musashi’s ‘Way of the Warrior’
Return to Top