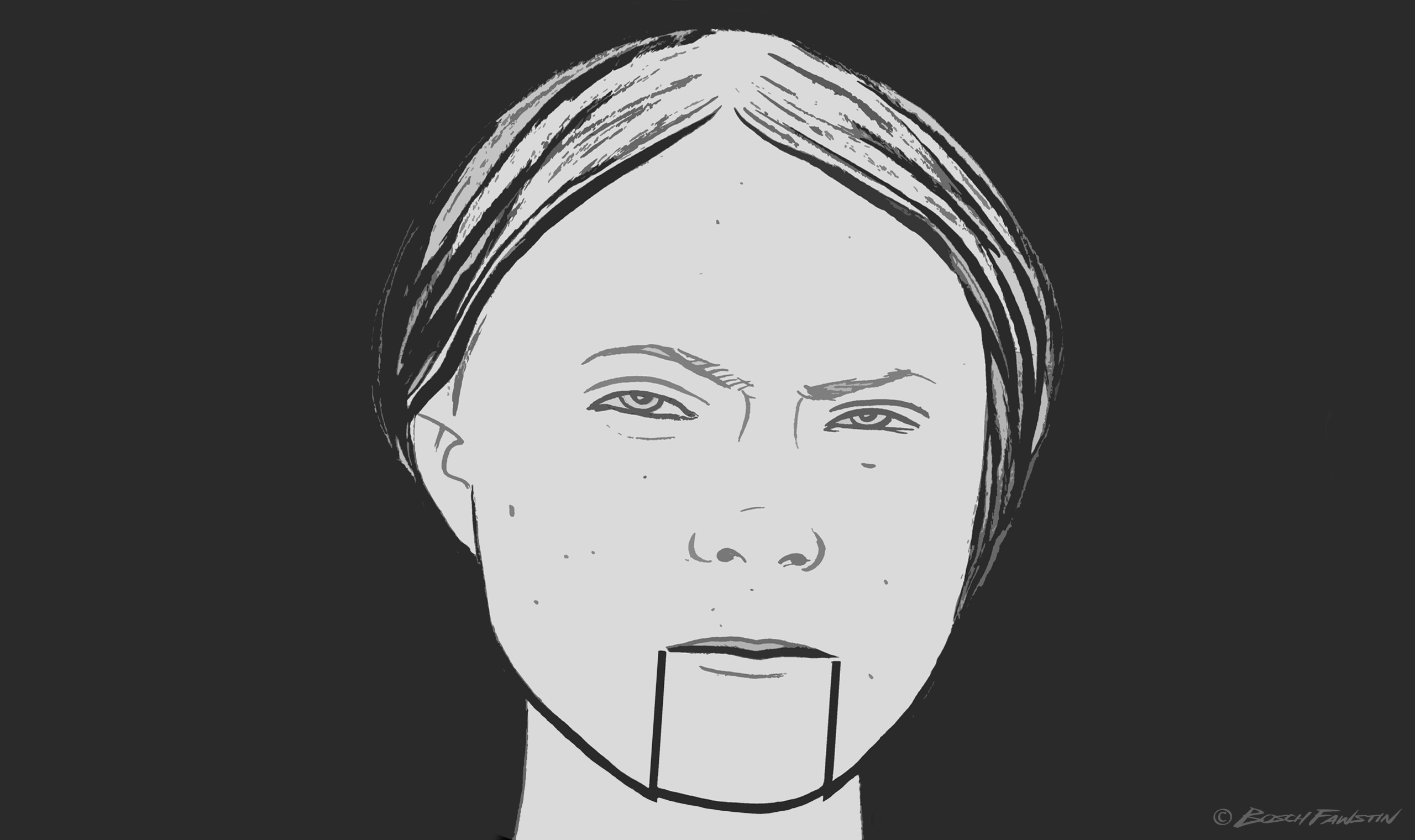 We Have to Save the World from Climate Change . . . Activists by Bosch Fawstin
Education & Parenting,  Politics & Rights,  Science & Technology

Greta Thunberg Should Be Angry—and So Should You

When sixteen-year-old Greta Thunberg addressed the United Nations climate change summit on Monday (September 23, 2019), her fear and fury over its lack of urgency were palpable. “This is all wrong. I shouldn’t be up here. I should be back in school on the other side of the ocean. Yet, you all come to us young people for hope. How dare you? You have stolen my dreams and my childhood with your empty words.”1

It is an appalling tragedy that, in fact, empty words did steal much of Greta’s childhood—words she’s spent irreplaceable hours learning to recite with a passion that makes her parents (an actor and an opera singer) proud. Greta, though, clearly isn’t acting. Through tears of genuine terror, the Swedish teenager told applauding adults:

The popular idea of cutting our emissions in half in ten years only gives us a 50 percent chance of staying below 1.5 degrees and the risk of setting off irreversible chain reactions beyond human control. Fifty percent may be acceptable to you, but those numbers do not include tipping points, feedback loops, additional pollution, or the aspects of equity and climate justice.

If the ability to recall statistics from the Intergovernmental Panel on Climate Change (IPCC) and a few other scientists makes one a climate expert, then Greta is one. “For more than thirty years, the science has been crystal clear,” she—with an air of unquestionable authority—told world leaders. And she scolded them: “How dare you continue to look away?”

But Greta is not the only “expert.” In 1989, exactly thirty years ago, Noel Brown, director of the New York office of the United Nations Environment Program (UNEP), said that by the year 2000, global warming would melt enough polar ice to put the Maldives and other flat islands underwater; that “ecological refugees will become a major concern”; and that governments had only a ten-year window to solve the greenhouse effect before the damage would be irreversible.2 In 2007, Professor Wieslaw Maslowski of the U.S. Navy’s Department of Oceanography predicted that by 2013, the Arctic Ocean would begin to experience ice-free summers.3 That same year, the IPCC predicted that by 2020, global drought will reduce agricultural yields by 50 percent—a prediction it already has retracted. In 2012, University of Cambridge physicist Peter Wadhams predicted that by 2016, the Arctic ice sheet would collapse.4 Some climate scientists have also predicted, among other things, that human activities would cause an ice age, an increase and decrease in snowfall, a decline in polar bear populations, more tropical storms, and global food shortages.5

These scientists all have been wrong—not just within a normal tolerance for what admittedly are extremely difficult predictions—but way wrong.6 Their threats of catastrophe, in essence, have been mere empty words—at least for adults who have heard enough such claims not to fly off the handle in a visceral panic at each new one.

Not so for the young. Greta told politicians at the summit, “You are still not mature enough to tell it like it is,” and she’s right—though not in the way she thinks. As if it weren’t already hard enough to separate fact from falsehood on the topic of climate change, it’s long been common practice for politicians, reporters, and even supposed climate experts to inflate their claims for maximum shock value. Paul Ehrlich, perhaps the first climate alarmist, inaugurated the tactic in 1969 when he told reporters, “Everyone will disappear in a cloud of blue steam by 1989.”7 Further, because many climate scientists work for government bodies (such as the IPCC, a UN body), they are incentivized to conclude that things are so bad that governments must do something, that they themselves ought to direct that something and continue being paid for their expertise. (This inherent bias, by the way, was the primary reason why a group of scientists decided to form the Nongovernmental International Panel on Climate Change, a group with no government affiliations.)

It is a damning indictment of these climate alarmists—and of many parents and teachers—that their empty threats have put the fear of death and Armageddon in Greta’s generation. Because of their handiwork, children are losing sleep—and the joys of youth—to thoughts of rising sea levels and the like.

Thus, Greta’s anger and grave seriousness are fully justified. But she was only half right when she told the summit, “You are failing us, but the young people are starting to understand your betrayal.” As Dilbert cartoonist Scott Adams recently wrote in “A Message for Children about Climate Change,” “We adults respect your passion and your energy on the topic of climate. But it isn’t fair for us to deny you the basic facts while at the same time scaring you into action.”8

That is the betrayal that Greta and others like her need to understand. They’ve been misled by the hysterics of doomsayers to spend their formative years trembling with dread.

Worse, though, than wasting one’s childhood on a hoax is doing so in the service of political goals that will torch one’s future more certainly than any 1.5 degree rise in temperature. Journalist Ryan Cooper writes, “Thunberg and company do not demand new constitutional structures, or collective ownership of the means of production, or anything similar—but only that existing major parties live up to their expressed commitment to head off climate change.”9 That’s all Greta and company need demand; others will follow through on the details, as Cooper is keen to do.

“Of course,” he continues, “the hour is so late that any sufficient climate justice plan would necessarily have gigantic economic ramifications—above all the wholesale deletion of all property rights in buried carbon reserves [e.g., buried coal, oil, natural gas, etc.].” That is, to deal with the latest batch of fire and brimstone predictions, we need to massively increase government power—the inevitable result of emergencies and the reason that power lusters have never seen one they didn’t like.

As Hugo Chavez put it, “We must reduce all the emissions that are destroying the planet. However, that requires a change in lifestyle, a change in the economic model: We must go from capitalism to socialism.”10

According to Cooper and others, we must give bureaucrats the authority to strictly regulate the types and amount of energy we can use. Toward that end, bureaucrats must also be empowered to “delete” property rights, starting with those of the people who create the fuels that power our modern world. Virtually every value we depend upon to live and flourish—food, shelter, medical care, education, and so on—requires plentiful and reliable energy, which solar and wind are nowhere close to being able to provide. Tamping down the sources that are plentiful and reliable—fossil fuels, as well as nuclear where it’s not barred by mountains of regulations—means diminishing every aspect of our lives.

Not only are eco-alarmists destroying the lives of children, but they are unashamedly using them as fodder in their attack on human flourishing and the freedom that makes it possible. Undoubtedly, we should all feel the fire of moral fervor that Greta does.

Eco-alarmists are destroying the lives of children and unashamedly using them as fodder in their attack on human flourishing and the freedom that makes it possible. We should all feel the moral fervor that @GretaThunberg does.
Click To Tweet

1. Tim Hains, “Greta Thunberg to UN Climate Summit: If You Really Understand the Situation and Still Do Nothing, ‘You Are Evil,’’ Real Clear Politics, September 23, 2019, https://www.realclearpolitics.com/video/2019/09/23/greta_thunberg_to_un_climate_summit_you_have_stolen_my_dreams_and_my_childhood_with_your_empty_words_how_dare_you.html.

4. May, “Some Failed Climate Predictions.”

5. May, “Some Failed Climate Predictions.”

6. May, “Some Failed Climate Predictions.”