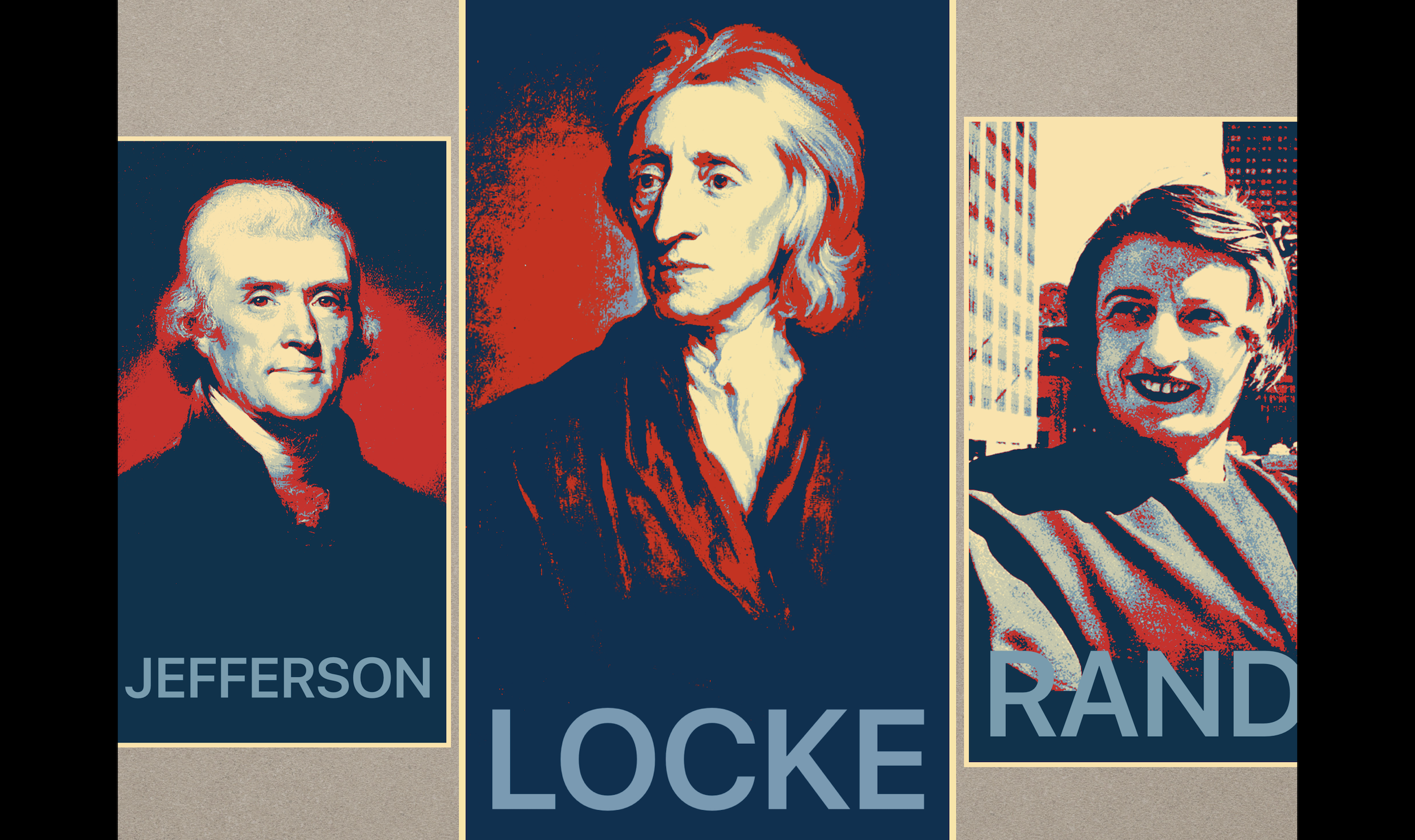 John Locke: The Father of Liberalism

Some have said that the history of the Western world is a battle between the ideas of Plato and those of Aristotle, between the otherworldly and the this-worldly, between the mystical and the rational.1 The Enlightenment was an age when the Aristotelian approach of observation and logic generally prevailed, when a great many thinkers—for the first time since ancient Greece—truly prized their minds as the means by which to understand and shape the world. Isaac Newton discovered mathematical principles governing natural phenomena, Benjamin Franklin turned disparate observations about electricity into a unified scientific theory, Captain James Cook explored distant lands, Denis Diderot organized a mass of new knowledge in the world’s first encyclopedia. Instead of basking in thoughts of the glory of an alleged afterlife, a number of great men turned their focus to the here and now, toward making this world as good a place as possible for human life.

Some embraced this scientific mind-set and applied it to understanding man himself, his means of knowledge, ethics, and the origin, purpose, and proper structure of government. The result of their efforts was most eloquently expressed in the Declaration of Independence: “We hold these truths to be self-evident, that all men are created equal,” wrote Thomas Jefferson, that they have “certain unalienable Rights, that among these are Life, Liberty and the pursuit of Happiness. — That to secure these rights, Governments are instituted among Men, deriving their just powers from the consent of the governed.” The distinctive social and political philosophy of the Enlightenment enshrined liberty, so the system of thought that men developed to support and defend it became known as liberalism.

Importantly, however, this political philosophy did not originate with Jefferson or his contemporaries. As Jefferson wrote, “the object of the Declaration” was “not to find out new principles, or new arguments, never before thought of,” but rather “to be an expression of the American mind.” “[A]ll its authority,” he conceded, “rests then on the harmonizing sentiments of the day.”2 And as he readily pointed out, one of the primary shapers of the American mind was John Locke.3 Locke (1632–1704) was at the forefront of Enlightenment thinkers who advanced an experimental, this-worldly approach to knowledge, science, and philosophy. Although he was not the first to advance a theory of natural rights, his defense of rights was the most systematic, clear, and comprehensive—and, consequently, the most influential.4

Sons of Liberty leader Samuel Adams bolstered his arguments for the rights of American colonists with near direct quotations of Locke.5 Alexander Hamilton chastised an adversary for his apparent ignorance of natural rights theory and recommended that he read Locke.6 John Adams cited Locke as an inspiration for his “revolution-principles,” which he said were “the principles of nature and eternal reason” and constituted a rational alternative to docile obedience and bloody anarchy.7

Adams also was influenced deeply by Locke’s ideas about the nature of the mind and our means of acquiring knowledge. So was Benjamin Franklin, who commemorated Locke as “the Newton of the Microcosm” and who relied heavily on Locke’s ideas about education, history, rhetoric, and law in his efforts to establish Philadelphia Academy (known today as the University of Pennsylvania).8 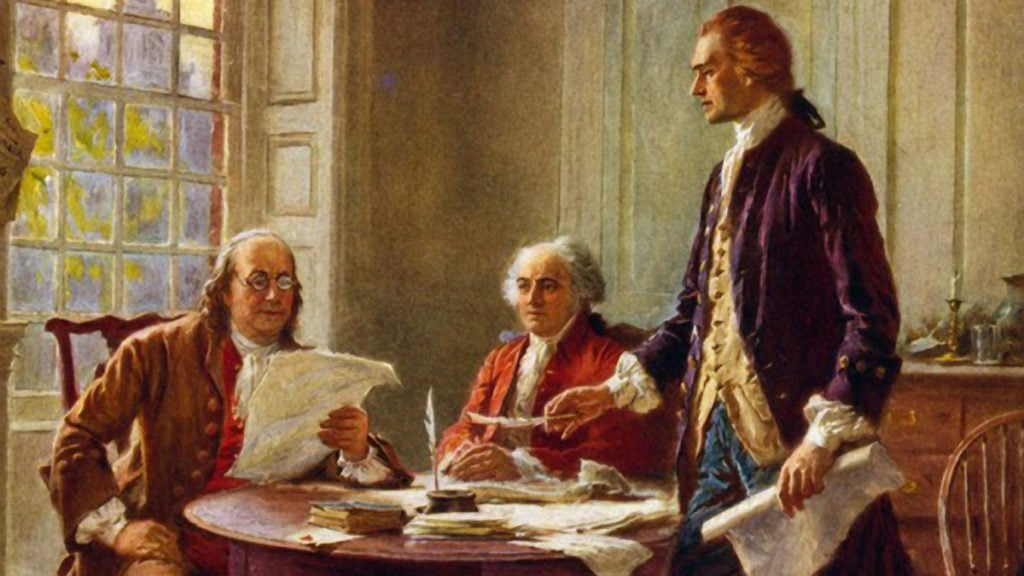 Writing the Declaration of Independence, 1776 by Jean Leon Gerome Ferris

Indeed, if Jefferson or any other writer of the time had intended to express not the “American mind,” but the Western mind or the Enlightenment mind as such, he’d be hard pressed to articulate its “harmonizing sentiments” without invoking the ideas of John Locke. If we want to advance the Enlightenment and live in it today, we must understand Locke’s ideas.

In Pursuit of Useful Truths

Locke so well encapsulated the Enlightenment mind because he passionately pursued any and all knowledge that could be used to enhance human life and happiness. As a friend of his said, what Locke “chiefly loved” were “truths that were useful, and with such fed his mind.”9 . . .

View all articles by Jon Hersey →
Letter to the Editor
Seven Great Poems on the Glory of ManFrom the Editor, Fall 2019

1. For example, see Arthur Hermann, The Cave and the Light: Plato Versus Aristotle, and the Struggle for the Soul of Western Civilization (New York: Random House, 2013).

3. Jefferson also credited Aristotle, Cicero, and Algernon Sidney with helping to shape the American mind. See Jefferson, Writings, 1501. Nonetheless, Jefferson considered Locke (along with Isaac Newton and Francis Bacon) among the “trinity of the three greatest men the world had ever produced,” and he relied heavily on Locke’s Two Treatises in his drafts for the Declaration of Independence. See “Thomas Jefferson to Benjamin Rush, 16 January 1811,” Founders Online, National Archives, https://founders.archives.gov/documents/Jefferson/03-03-02-0231.

14. The length of a pendulum whose period was one second was thirty-nine inches. Locke’s “philosophical or universal foot,” as he called it, was one-third of this: thirteen inches. The “philosophical foot” was then divided into ten “inches,” these into ten lines, and the lines into ten grys. Grys being one-thousandth of a philosophical foot, the system enabled very precise and minute measurements.

15. This journal was the Bibliothèque Universelle et Historique, a French-language journal published in Amsterdam by the French immigrant theologian Jean Le Clerc. In this journal, Locke also published his New Method of a Commonplace Book, an abridgment of his (as yet unpublished) Essay Concerning Human Understanding, and a review of a medical work by Robert Boyle. See J. R. Milton, “Locke’s Publications in the Bibliothèque Universelle et Historique,” British Journal for the History of Philosophy 9, no. 3 (May 25, 2011), https://www.tandfonline.com/doi/abs/10.1080/09608788.2011.564845?journalCode=rbjh20.

17. Locke’s friend Pierre Toinard had this published in French under the title Méthode nouvelle de dresser des Recueils, and Locke later got around to publishing it in English as A New Method of Making Common-Place-Books.

22. Despite Locke’s intention to pursue a life of study and experiment, he depended on several patrons, and he was somewhat obliged to take up tasks they asked of him. He worked as a secretary, ran errands, accompanied dignitaries and students on their travels, served on several government councils and as commissioner for Greenwich Hospital, and even helped plan a wedding. He traveled almost constantly, was always being interrupted, and for the most part had ready access to the mass of books he collected only for short intervals between trips. In fact, he did not have all of his books in one place between 1667 and 1691, the twenty-four years in which he published all of his major works. Locke’s comings and goings led one not-so-generous critic to characterize him as a “traveling tutor” who “fixes nowhere, has no habitation,” but rather “creep[s] into houses, and insinuat[es] into families.” See Woolhouse, Locke, 399.

37. The same goes for his Two Treatises of Government, also published anonymously—and only a decade after Locke drafted it.

45. Hobbes also held that men are endowed with a rational faculty. But instead of it leading men to develop civil society, it leads them first to pillage and plunder and, only after experiencing the consequences of this, to submit to the most powerful tyrant; Locke, Two Treatises, 89.

51. For more on the futility of anarchy, see Craig Biddle, “Libertarianism vs. Radical Capitalism,” The Objective Standard 8, no. 4 (Winter 2013), https://www.theobjectivestandard.com/issues/2013-winter/libertarianism-vs-radical-capitalism/.

54. I’d like to thank Andrew Bernstein for reminding me of this point.

55. According to Oxford economist Max Roser, today “No country in the world has a lower life expectancy than the countries with the highest life expectancy in 1800.” See Max Roser, “Life Expectancy,” Our World in Data, https://ourworldindata.org/life-expectancy (accessed July 25, 2019).

60. Of course, neither rights nor their cause(s) are self-evident. Gravity is a law of nature—the effects of which are self-evident. Drop a book, and you’ll see it tumble to the ground. The evidence for rights, by contrast, is not immediately available to the senses but instead requires an abstract process of thought that integrates a massive number of observations. For an explanation of the source and secular nature of rights, see Ayn Rand, “Man’s Rights,” The Virtue of Selfishness: A New Concept of Egoism (New York: Signet, 1964).

61. Quoted in Craig Biddle, “Ayn Rand’s Theory of Rights: The Moral Foundation of a Free Society,” The Objective Standard 6, no. 3 (Fall 2011), https://www.theobjectivestandard.com/issues/2011-fall/ayn-rand-theory-rights/.

66. Jeremy Bentham is here quoted from Biddle, “Libertarianism vs. Radical Capitalism.” Regarding Hume’s claim that moral principles cannot be derived via reason, and Ayn Rand’s demonstration to the contrary, see Craig Biddle’s Loving Life: The Morality of Self-Interest and the Facts that Support It (Richmond, VA: Glen Allen Press, 2002), chapters two and three.

68. In an essay titled “The Ground of Locke’s Law of Nature,” Thomas West pulls together passages concerning Locke’s “law of nature” scattered throughout his works and concludes, “Locke’s reasoning on the law of nature leads us to conclude that he has a far richer understanding of the limits of reason, and the importance of nonrational features of society such as religion and customs, than he is generally credited with.” See Thomas West, “The Ground of Locke’s Law of Nature,” Natural Rights, Individualism, and Progressivism in American Political Philosophy (Cambridge: Cambridge University Press, 2012). Locke’s appeals to God also undermine his argument for property rights. See Fred D. Miller and Adam Mossoff, “Ayn Rand’s Theory of Rights,” Foundations of a Free Society: Reflections on Ayn Rand’s Political Philosophy, edited by Gregory Salmieri and Robert Mayhew (Pittsburgh: University of Pittsburgh Press, 2019), 132.

69. See Ayn Rand, “Man’s Rights”; see also Craig Biddle, “Ayn Rand’s Theory of Rights: The Moral Foundation of a Free Society”; see also Carl Barney and Craig Biddle, “Liberty: What Is It? Why Is It Good? On What Does It Depend?,” The Objective Standard 14, no. 1 (Spring 2019), https://www.theobjectivestandard.com/2019/02/liberty-what-is-it-why-is-it-good-on-what-does-it-depend-2/.