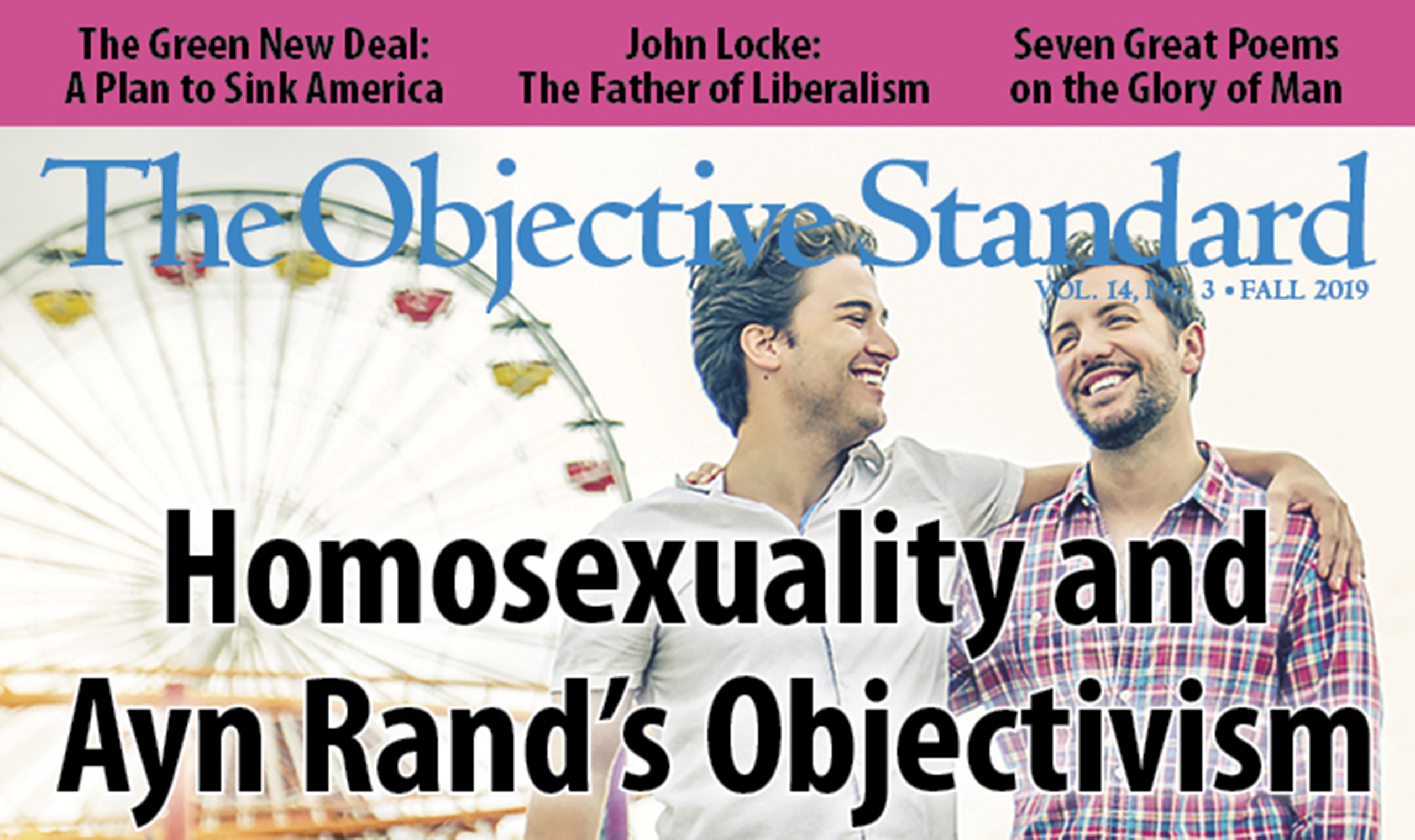 Welcome to the Fall 2019 issue of The Objective Standard.

We’ve just wrapped up our second annual summer conference—TOS-Con 2019: Philosophy for Freedom and Flourishing—and I’d like to begin by thanking everyone who helped make it so successful, fun, and enlightening.

Thank you, speakers and performers for your expertise, energy, and amazing deliveries. Thank you, Sarah Biddle for planning and managing the event. Thank you, Jon Hersey, Tim White, and Pete Masterson for helping in various ways, from AV to marketing to signage. Thank you, Atlases, for lowering the cost of registration for students and young adults. Thank you, Carl Barney, for providing scholarships that enabled so many young people to attend. And thank you, attendees, for coming to Park City and engaging with us for the most life-enhancing conference of the year. I look forward to seeing you all at TOS-Con 2020! (Stay tuned for announcements about that in the coming weeks.)

Now, on to the contents of this issue.

First up, in “How I Avoided the Struggles of Most Young Gay People,” Stewart Margolis shares how Ayn Rand’s philosophy of Objectivism helped him to deal with various personal and social issues that are common among young gay people, to pursue his goals and values guiltlessly, and to live a happy, fulfilling life as the individual he is. This is a beautiful article that I highly recommend sharing not only with young gay people, but with anyone who could use a deeper understanding of the importance of philosophy and individualism in the pursuit of happiness. The online version of the article is accessible for free. I hope you’ll share it far and wide.

Next up, in “John Locke: The Father of Liberalism,” Jon Hersey examines some of Locke’s key contributions in the realm of life-serving philosophy, the ideas and practices that made him an exemplar of the Enlightenment, and his profound impact on the American founders and the world in which we live today. As Hersey shows in this inspiring and instructive account, Locke is a hero’s hero.

In “The Green New Deal: A Plan to Sink America,” Tim White shows why, if enacted, Alexandria Ocasio-Cortez’s pet legislation would be catastrophic. White makes clear that despite Ocasio-Cortez’s stated intentions of spurring economic growth and guaranteeing jobs, health care, and higher education, if she truly cared about any such values, “she would acknowledge the mountains of evidence that show that laissez-faire capitalism is the only effective—and moral—way” to achieve them.

After that, you’ll likely be longing for some spiritual fuel, and we have lots in store.

Joseph Kellard tells the fascinating story behind Emanuel Leutze’s iconic portrayal of General George Washington in “Washington Crossing the Delaware: A Beacon of the American Spirit.” Leutze faced major obstacles while working on this painting, and to overcome them, he channeled the heroism of his subject. The result is a work of art that, as one businessman reflected, “forcibly illustrates the skill, beauty & grandeur of man’s efforts when perseveringly directed for a worthy & noble end.”

This year marks the 110th birthday of Leo Fender, and Jon Hersey commemorates this determined and industrious guitar and amp designer in “The Man Who Electrified Music.” Whatever your knowledge of or interest in Fender or electric guitars, I think you’ll enjoy this unique perspective on his role in the history of American music.

In “How John H. Patterson Modernized Industry,” Jonathan Townley tells the story of this unsung entrepreneur whose National Cash Register company dramatically improved the way Americans handled money in the 20th century. As Townley writes, Patterson “showed the world what so many ‘greedy industrialists’ are made of: an enduring will to remake the world as it could and should be—and on their own terms.”

In “The Enigma Code Breakers Who Saved the World,” Tim White recounts the remarkable story of amazing minds such as Marian Rejewski, Jerzy Różycki, Henryk Zygalski, Dillwyn Knox, and Alan Turing, who broke the codes of Nazi Germany’s Enigma encryption machines and thereby made possible Allied victories that culminated in Germany’s surrender in WWII.

Next, White zooms in on a heroine of a war effort from an earlier era, in “Joan of Arc: Heroine of France, Exemplar of Courage.” Whereas seasoned French soldiers repeatedly had failed to make substantial headway against British advances, this brave and inspiring teenage girl led thousands of troops in a fight for a primitive yet contextually admirable conception of freedom.

Wrapping up the feature items in this issue are “Seven Great Poems on the Glory of Man” by various authors, compiled by Sarah Biddle. If you’ve read Sarah’s compilations in earlier issues of TOS, you know what to expect. If you haven’t, well, you’re in for a treat!

Book, movie, and play reviews in this issue are:

That’s the lineup. Enjoy the articles, poems, and reviews—and be sure to let your friends know about the journal for people of reason. Amid the rampant irrationality in today’s culture, this oasis can save souls, even lives. —Craig Biddle

View all articles by Craig Biddle →
Letter to the Editor
John Locke: The Father of LiberalismCharles Sumner’s Principled Attack on Slavery
Return to Top