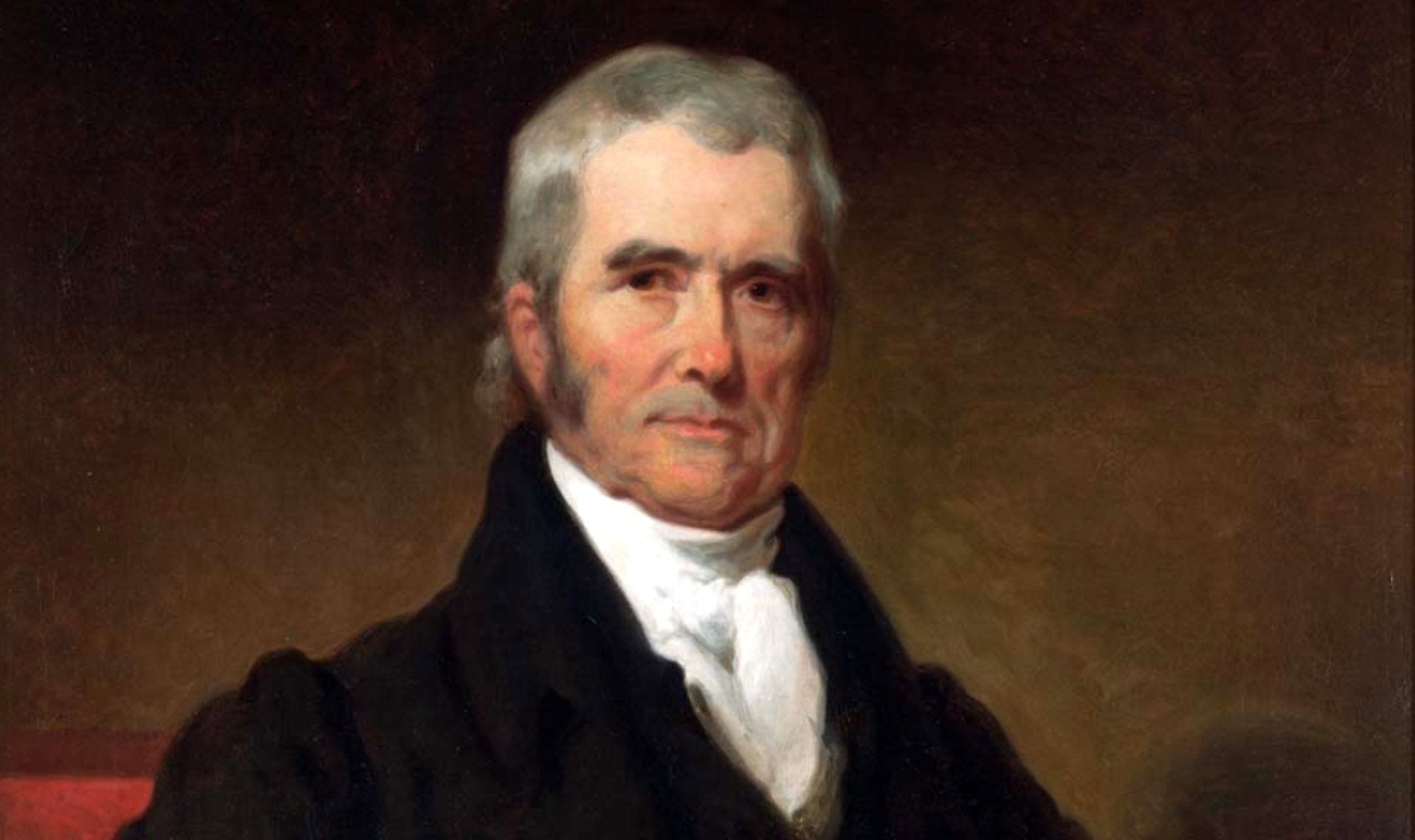 Virginia lawyer William Wirt once likened John Marshall’s style of reasoning to a sunrise. When Marshall explained his opinions, wrote Wirt, the “eloquence” consisted not of rhetorical flourishes but of the “easy gradations” by which he moved toward his conclusions:

every sentence is progressive; every idea sheds new light on the subject . . . the dawn advances in easy but unremitting peace; the subject opens gradually on the view; until, rising in high relief, all its native colors and proportions, the argument is consummated by the conviction of the delighted [reader].1

Others emphasized the “simplicity” of Marshall’s easygoing nature—including even such political opponents as Thomas Jefferson, who complained that Marshall’s “lax lounging manners” made him “popular with the bulk of the people.”2

His down-to-earth style and skill at dispassionate reasoning served him well during his three and a half decades on the federal bench. As chief justice of the United States from 1801 to 1835, Marshall presided over scores of lawsuits that established critical precedents on a vast array of constitutional issues, decisions that set the terms of legal debate for generations to follow. Because his writings took the form of judicial opinions, his work is not as widely read as that of other founding-era figures such as Jefferson or James Madison. Yet his intellectual legacy is, in some ways, more profound and more enduring, particularly in defending the Constitution’s most important attribute—its creation of an ingenious legal structure known as “dual sovereignty”—in principled terms, even when heated political debates distracted some of his contemporaries from the importance of this singular innovation.

Born in Virginia in 1755, Marshall was a generation younger than George Washington, the man he idolized and of whom he wrote a five-volume biography. During the Revolution, Marshall served in the infantry, seeing action at Brandywine, Norfolk, and elsewhere, and attaining the rank of captain. During a furlough from the army in 1779, he began studying law under George Wythe, a signer of the Declaration of Independence who had tutored Jefferson years before. Wythe was one of the state’s most prominent attorneys, and, like most legal thinkers of that period, was steeped in the natural law ideas of philosophers such as John Locke, Baron de Montesquieu, and Samuel von Pufendorf, as well as the common law system inherited from Great Britain. The tension between these two systems of thought would form the background for many of the most contentious controversies of Marshall’s career. . . .

View all articles by Timothy Sandefur →
Letter to the Editor
Liberating Public LandsPurpose Comes from Reason, Not Religion

3. Jonathan Elliot, ed., The Debates in the Several State Conventions on the Adoption of the Federal Constitution, vol. 5(Washington, DC: Blair & Rives, 1845), 213.

17. William Frenandez Hardin, “‘This Unpleasant Business’: Slavery, Law, and the Pleasants Family in Post-Revolutionary Virginia,” Virginia Magazine of History and Biography125, no. 3 (2017): 211–45; Timothy Sandefur, “Why the Rule against Perpetuities Mattered in Pleasants v. Pleasants,” Real Property Probate and Trust Journal40 (2006): 667–77.

18. The rule decrees that any gift in a will that is conditioned on something occurring in the future is only valid if it will definitely and fully belong to the recipient within twenty-one years of the life span of someone alive when that will is written. Thus if John leaves his farm to Richard on the condition that Richard graduates from college, that gift is legal because, as a logical necessity, Richard must graduate within the life-plus-twenty-one-year period (he must be alive to graduate). But a gift to Richard’s first grandchild who graduates from college is not valid, because Richard may never have a grandchild, or his grandchild might be born more than twenty-one years after John’s death. In Pleasants, the rule was important because the will did not command Pleasants’ children to free the slaves but purported to bequeath freedom directly to the slaves themselves. The validity of that gift then depended on the rule. Wythe ruled that the gift was valid because a slave must necessarily be alive to enjoy freedom—and the slaves’ children were free because they were the children of free persons. This is dubious as a logical matter—the legislature might never have passed such a law—but it satisfied the court. See Sandefur, “Why the Rule against Perpetuities Mattered,” 673. In the decades after Pleasants, some southern courts refused to rely on the Pleasantsprecedent on the grounds that slaves are not persons but property and cannot inherit anything under a will. “Every thing which belongs to [the slave], belongs to his owner,” declared a South Carolina court, “and it would be absurd to say, that property can own property.” Lenoir v. Sylvester, 17 S.C.L. 632, 642 (1830).

22. This incident, overlooked by most prominent Marshall biographers, is described in detail in Kurt T. Lash & Alicia Harrison, “Minority Report: John Marshall and the Defense of the Alien and Sedition Acts,” Ohio State Law Journal68 (2007): 435–516. The Minority Report does not appear in most collections of Marshall’s writings, including Hobson’s.

24. James Madison, Report on the Virginia Resolutions, Jack Rakove, ed., James Madison: Writings(New York: Library of America, 1999),608–62. Madison’s argument that the First Amendment includes—but goes beyond—the common law rule against prior restraints has never been expressly resolved by the Supreme Court, although in practice it has made clear that the punishment-after-publication principle allowed by the common law rule would violate the First Amendment.

25. Marshall, Report of the Minority on the Virginia Resolutions, 672.

26. Although anonymous writing on political subjects was the norm at the time, anonymity was also warranted in this case by the fact that the resolutions themselves constituted seditious libel under the Sedition Act. Although Jefferson was then vice president (the Sedition Act notably did notprohibit criticism of the vice president) and Madison was serving in the House of Representatives, the Adams administration did in fact imprison and fine a sitting Congressman, Matthew Lyon, for publicly criticizing the president.

30. In fact, it was Marshall himself, as Adams’s secretary of state, who was responsible for the failure to hand over Marbury’s commission.

32. Marshall: Writings,250. Contrary to a popular misconception, Marburydid not originate the idea that courts can declare laws unconstitutional—the concept known today as “judicial review.” That idea had been well known to British lawyers for a century and a half before the Revolution, and Marshall himself had referred to it in his Virginia Ratification Convention speech.

38. Thomas Jefferson, Opinion on the Constitutionality of a National Bank, in Jefferson: Writings, 419.

39. Hamilton, Opinion on the Constitutionality of a National Bank, in Joanne B. Freeman, ed., Alexander Hamilton: Writings(New York: Library of America, 2001), 618.

42. Madison explained this apparent inconsistency by arguing that the American people had accepted Washington’s judgment as to its constitutionality, and that it would be more disruptive to the nation to reevaluate that question years later. Letter to Charles Jared Ingersoll, June 25, 1831, in Marvin Meyers, ed., The Mind of the Founder: Sources of the Political Thought of James Madison(Hanover, NH: Brandeis University Press, 1981),390–93.

48. It was convenient for Marshall to do so; he had access to Washington’s papers as part of his work on his multivolume Washington biography.

58. Madison, “Advice to my Country,” 1834, Madison: Writings, 866. Madison struggled—with little success—to argue that the Kentucky and Virginia Resolutions had never endorsed states’ rights theory, and he eventually admitted that Jefferson’s wording had been “less guarded” than it should have been. Still, he insisted, if “the abuse of the expression [had] been foreseen or suspected” at the time, he and his friend would have been more careful. Letter to Nicholas Trist, December 23, 1832, in Madison: Writings, 861–63.

60. When Jefferson wrote that he hoped states would “crush in its birth the aristocracy of our monied corporations which dare already to challenge our government to a trial by strength, and bid defiance to the laws of our country”—a quote often used to portray Jefferson as hostile to modern capitalism—he was referring to this older conception of the inherently monopolistic corporation, not to the private business corporation that was in its infancy at that time. Letter to George Logan, November 12, 1816, Writings of Thomas Jefferson,vol. 10, 69.

61. Not solely responsible, however. The first general incorporation law—whereby the corporate form was made available to anyone who applied, rather than being established on a case-by-case basis by legislative act—was enacted in 1795 in North Carolina. These statutes “radically transformed” the nature of the corporation. Gordon Wood, The Radicalism of the American Revolution (New York: Knopf, 1992), 318. See also Robert Hessen, In Defense of the Corporation (Stanford: Hoover Institution Press, 1978), chap. 3; Timothy Sandefur, The Right to Earn a Living (Washington, DC: Cato Institute, 2010), 26–31.

67. The best book on this epochal case is Stanley I. Kutler, Privilege and Creative Destruction: The Charles River Bridge Case (New York: Norton, 1971).

68. For instance, when the court upheld a state law that regulated steamships on interstate waterways—something Marshall thought states had little power to do—Story wrote that he had “the consolation to know” that “that great constitutional jurist, the late Mr. Chief Justice Marshall” would have agreed with his own dissenting view. Mayor of New York v. Miln, 36 U.S. 102, 161 (1837).

78. The best account of Johnsonand other cases is Stuart Banner, How the Indians Lost Their Land (Cambridge, MA: Harvard University Press, 2005), 178–90, although my view of Marshall’s sympathies differs considerably from his.