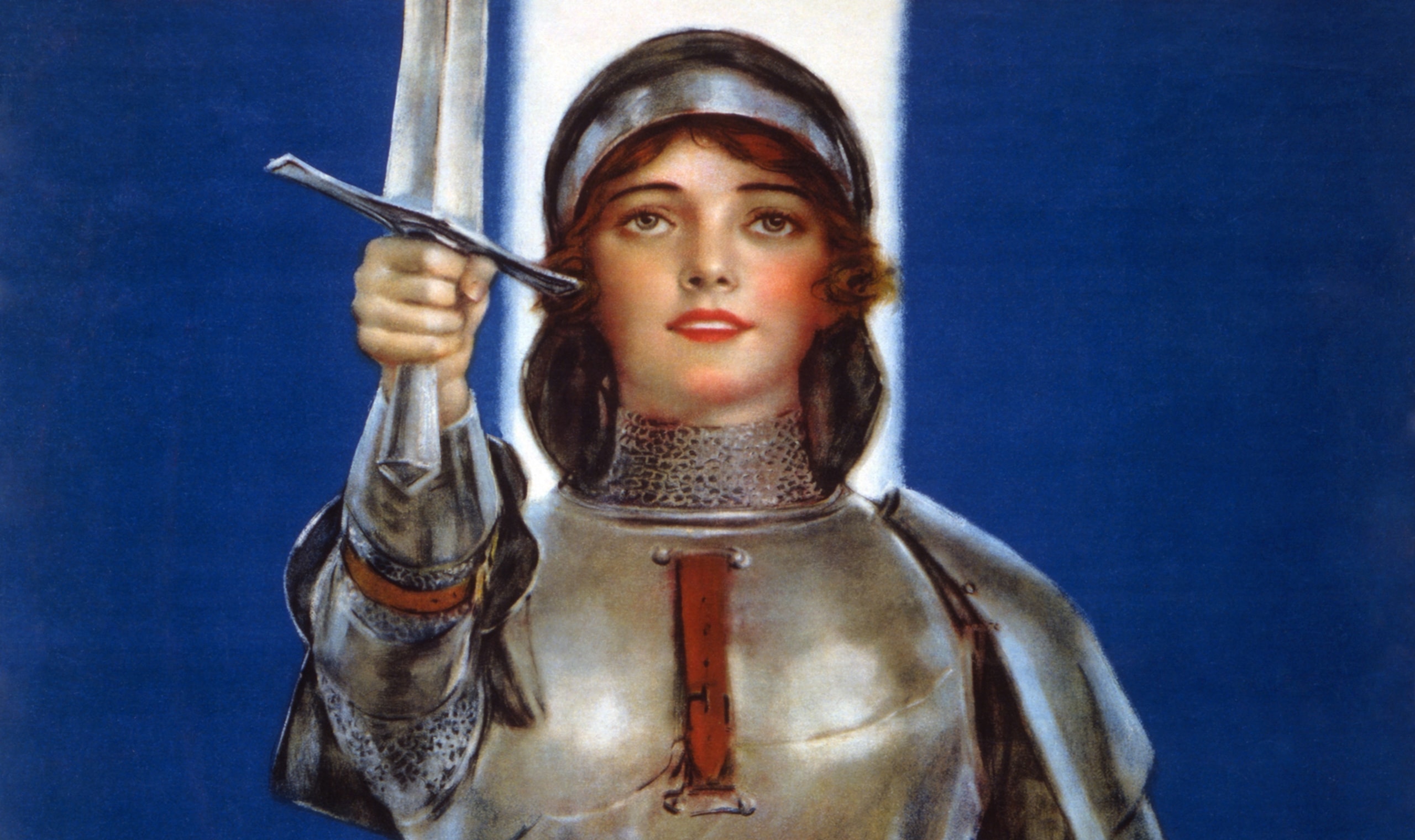 Joan of Arc as imagined by a WWI-era American artist, Library of Congress
Biographies,  History

Joan of Arc: Heroine of France, Exemplar of Courage

Jeanne d’Arc (hereafter referred to by her English name, Joan of Arc) was born circa 1412 to devout Catholic parents in the small village of Domrémy, France. At a time when virtually all women were expected to spend their lives sewing, milking goats, and having children, she instead would turn the tide of a century-long war and fundamentally change the course of world history.

Because Joan of Arc’s life was so deeply intertwined with the events of the Hundred Years’ War, a brief time line of the conflict is necessary to understand her actions and motives. The Hundred Years’ War (actually, a series of wars that would last 116 years) began in 1337 as an inheritance dispute between France and Britain over the French monarchy.

In 1066, the Norman king William the Conqueror took over England but also retained his claim to the French throne.1 Many generations later, in 1328, King Charles IV of France died. This meant that, according to a longstanding treaty, William’s descendant, Edward III, would accede to the throne in the absence of a more legitimate French heir—or so the English thought.2 Instead, France crowned Philip VI king, effectively ignoring the treaty from England’s perspective. An enraged Edward invaded France in 1337, but the conflict remained unresolved in 1360. By then, both countries were tired of war, for the time being, so France offered Edward a large chunk of land in the north in exchange for relinquishing his claim to the French throne, and he accepted.

In 1380, France crowned Charles VI, who was quite insane (he believed that his body was literally made of glass). He was such an incompetent ruler that in 1407, the French Houses of Orléans and Burgundy began fighting one another, each seeking to replace Charles with one of their own. 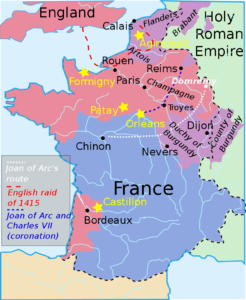 In 1413, one year after Joan’s birth, Henry V was crowned king of England. In yet another attempt to take the French throne for England, he tried to marry one of Charles’s daughters. Charles refused, and the two countries went to war yet again. In 1420, the French House of Burgundy officially allied with England and enlisted the aid of Charles’s wife, Isabeau of Bavaria, to convince him to sign the Treaty of Troyes, which positioned Henry to inherit the French throne upon Charles’s death.3 However, both kings died at nearly the same time, Henry dying shortly before Charles, meaning that his ten-month-old son, Henry VI, was officially the king of both countries. . . .

View all articles by Tim White →
Letter to the Editor
Thanks to Science, Allergies Don’t Have to Keep You DownSocrates: Dramatizing the History of Western Thought

2. France and England employed different standards of determining royal succession. In this case, matrilineal versus patrilineal heritage was the point of contention.

3. Recall that Charles VI was literally insane. His actions seem nonsensical and self-contradictory because they often were.

5. W. S. Scott, “Letters of Jeanne’s,” Jeanne d’Arc la Pucelle, https://www.jeanne-darc.info/biography/letters/ (accessed May 27, 2019); seven of Joan’s eight surviving dictated letters show sincere empathy for those impacted by the war, as well as a repeatedly expressed desire to resolve conflicts without bloodshed when possible. (It was rarely possible.) The eighth letter, which threatens a divergent sect with violence for the “crime” of heresy, was likely not written by Joan, but by a priest who claimed she had written it. She may not even have known about the letter.

8. Biographics, “Joan of Arc: The Maid of Orléans.”

9. Biographics, “Joan of Arc: The Maid of Orléans.”

14. Biographics, “Joan of Arc: The Maid of Orléans”; Joan’s men often reported that she wept over the bodies of her enemies, distraught that they had not surrendered peacefully.

16. Régine Pernoud, translated by E. Hymans, Joan of Arc By Herself and Her Witnesses (London: Scarborough House Publishing, 1982), 137; Biographics, “Joan of Arc: The Maid of Orléans.”

17. Pernoud, Joan of Arc By Herself and Her Witnesses, 138; Biographics, “Joan of Arc: The Maid of Orléans.”

19. Deuteronomy 22:5: “A woman must not wear men’s clothing, nor a man wear women’s clothing, for the LORD your God detests anyone who does this.” Why the church prosecutors chose to focus so heavily on Joan’s attire isn’t known with certainty. It’s likely that it was simply an easy target—everyone knew that Joan dressed as a man, and everyone knew that the Bible forbade it. More abstract theological charges were harder to “prove.”

23. Even though Aristotle lived eighteen hundred years before Joan did, his writings were largely unknown in fifteenth-century France—certainly to illiterate peasants—and proper conceptions of freedom and individual rights wouldn’t be fully formulated until Ayn Rand did so in the 1950s. In Joan’s time, world affairs were completely dominated by religion; it would be anachronistic and unfair to expect her to have understood or practiced a fully rational code of ethics as is possible to us today.