Essentialism: The Disciplined Pursuit of Less by Greg McKeown - The Objective Standard 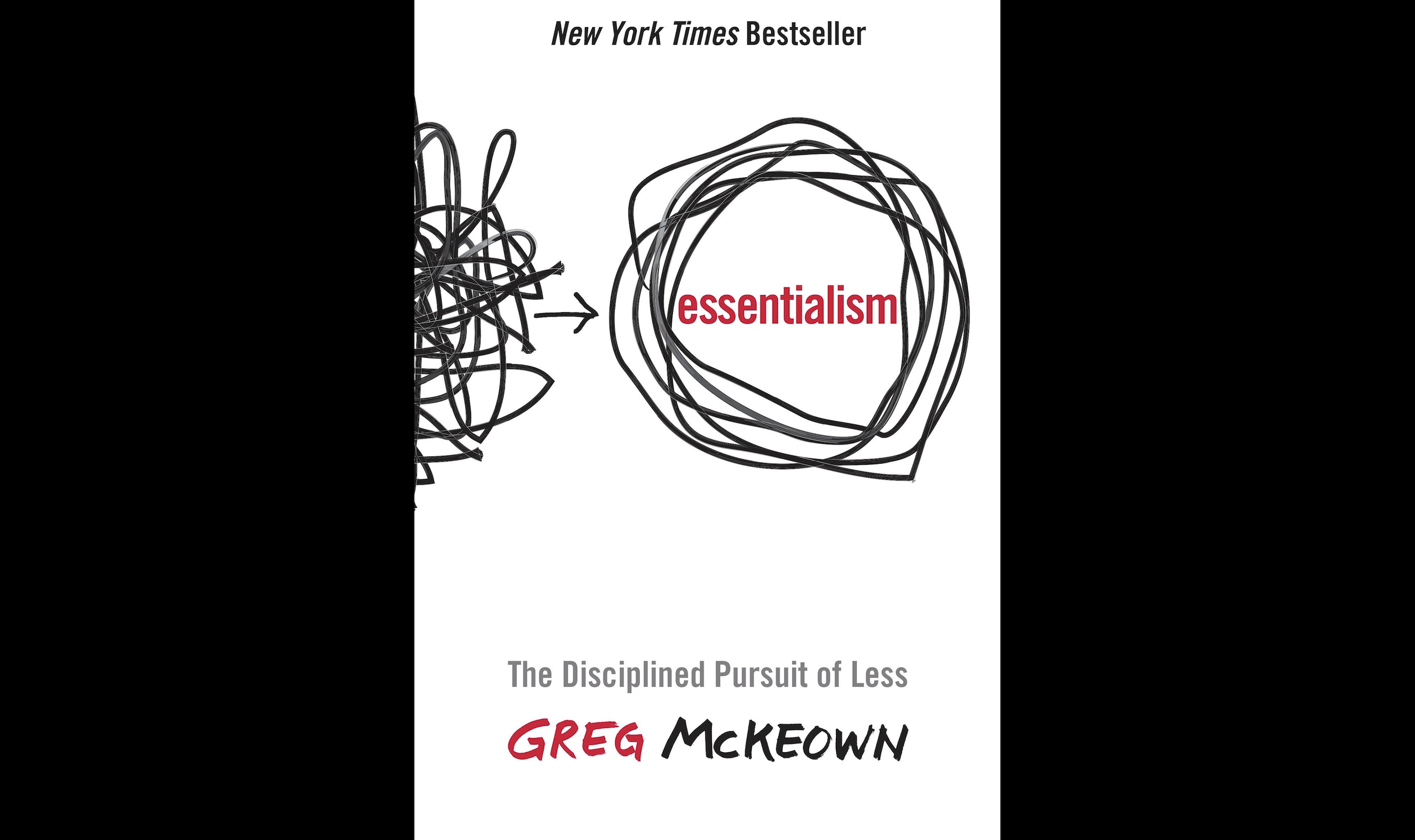 Essentialism: The Disciplined Pursuit of Less by Greg McKeown

Is there never enough time in the day to do everything you need to get done? Does chasing your dreams lead to neglecting other important areas of your life? Or does splitting your time between multiple goals keep you from making significant progress on any particular one?

If you answered “yes” to any of these questions, the solution, according to Greg McKeown, is a way of life he calls Essentialism. In his book Essentialism, he describes this way of life as the disciplined pursuit of fewer but better options. He explains:

The way of the Essentialist isn’t about setting New Year’s resolutions to say “no” more, or about pruning your in-box, or about mastering some new strategy in time management. It is about pausing constantly to ask, “Am I investing in the right activities?” There are far more activities and opportunities in the world than we have time and resources to invest in. And although many of them may be good, or even very good, the fact is that most are trivial and few are vital. The way of the Essentialist involves learning to tell the difference—learning to filter through all those options and selecting only those that are truly essential. (loc. 94–101)

McKeown holds that the way of the Essentialist is more fulfilling and leads to more success. But to travel this path, we must overcome resistance. According to McKeown, we must dispel three widely held yet faulty assumptions: “‘I have to,’ ‘It’s all important,’ and ‘I can do both’” (loc. 348).

The first assumption, “I have to,” describes the mindset of someone who has given up his power of choice. McKeown learned through experience (making career decisions by default rather than deliberatively) that “when we surrender our ability to choose, something or someone else will step in to choose for us” (loc. 380). When you do this, he explains, you surrender your time and life to other people’s choices. Instead, the Essentialist must recognize and celebrate the power of choice, so “the first and most crucial skill you will learn . . . is to develop your ability to choose choice, in every area of your life” (loc. 421). In other words, the path of the Essentialist involves conscious acknowledgment of the necessity of constantly making choices with regard to one’s time and values.

The second assumption, “It’s all important,” comes from the failure to recognize the fact that some values and goals are genuinely more important to your life and success than are others. McKeown holds that focusing on these few exceptionally important values and goals—and ignoring everything else—is how we make the most of our lives. He illustrates this with the example of Japanese manufacturers in the 1950s who focused their resources on solving only a few significant problems and, by doing so, vastly improved the quality of their products.

The third assumption McKeown identifies, “I can do both,” results from ignoring the fact that trade-offs involve mutually exclusive choices. According to McKeown, “[t]he reality is, saying yes to any opportunity by definition requires saying no to several others” (loc. 550). Instead, we must strategically choose the few projects and goals that matter most and let other opportunities go.

I’ve fallen into this trap myself when trying to decide between two career paths. I tried to work toward both, but in time the stress became overwhelming. I felt like I didn’t have enough time in the day to get everything important done. And I felt like I wasn’t making meaningful progress toward either goal despite the fact that I was constantly working on one or the other. Essentialism helped me to see that my increasing stress was due to the fact that I was straddling two different career paths simultaneously instead of prioritizing one over the other. When I finally decided to focus on one path and ignore the other, I noticed an immediate decrease in stress and an increase in progress toward my goal.

Toward helping you adopt the life of an Essentialist, McKeown discusses several tactics for exploring your options, eliminating the nonessential, and executing the essential.

According to McKeown, one of the most effective tactics to employ when exploring your options is simply to make time for thinking, questioning, and reflecting. In fact, McKeown holds that the Essentialist should spend as much time as possible discerning the essential from the nonessential, so that he can “commit and ‘go big’ on only the vital few ideas or activities” (loc. 629).

For example, Jeff Weiner, the CEO of LinkedIn, blocks off two hours on his schedule every day during which he attends no meetings. He uses this time to think about the growth of his business. Initially, this seemed like a wasteful indulgence, but in time he found that this was his most valuable productivity tool. McKeown says that Weiner “sees it as the primary way he can ensure he is in charge of his own day, instead of being at the mercy of it” (loc. 726).

In addition to making time for reflection, McKeown holds that it’s essential to make time for play. He defines play as “anything we enjoy simply for the joy of doing rather than as a means to [any other] end” (loc. 902). McKeown argues that play is essential because it allows you to explore possibilities and new ideas, eliminates stress, and has a positive effect on the brain’s executive functions, which include activities such as planning, analyzing, prioritizing, and deciding.

McKeown holds that it’s not enough simply to focus on the essential; one must also actively eliminate the nonessential. One way to do this is to pretend your commitments don’t exist.

Then begin from scratch, asking which you would add today. You can do this with everything from the financial obligations you have to projects you are committed to, even relationships you are in. Every use of time, energy, or resources has to justify itself anew. If it no longer fits, eliminate it altogether. (loc. 1660)

One way to ensure that you have adequate time and resources for your essential activities, such as career, hobbies, and relationships, is to set boundaries around them. This way, nonessential or lower-priority activities don’t usurp time required by higher-priority activities. McKeown holds that boundaries are not limiting but liberating. He illustrates this with a story about children playing on a school playground next to a busy street. Initially, the children were kept close to the school so as to be far away from the cars. But after the playground was fenced, the children were free to roam it at will. Essentially, McKeown notes, the children’s freedom on the playground more than doubled due to the presence of the fence. Similarly, setting boundaries around your essential activities enables you to maximize the amount of time and energy you spend engaged in them.

According to McKeown, the Nonessentialist tends to force execution whereas the Essentialist designs a system in which execution is as effortless as possible. A tactic that helps minimize the necessary effort is to focus on removing obstacles to execution. He explains: “By systematically identifying and removing [obstacles] you’ll be able to significantly reduce the friction keeping you from executing what is essential” (loc. 2064). But this shouldn’t be done haphazardly. The Essentialist finds the most progress-inhibiting obstacle and removes it.

Given that Essentialism is a fundamentally egoistic, life-serving philosophy, readers may be struck by the fact that McKeown seems to regard people such as Moses, Muhammad, and Mother Teresa as Essentialists, even though they preached philosophies antithetical to self-interest. Fortunately, McKeown does not try to demonstrate that these figures were exponents of Essentialism (which couldn’t be done). This flaw doesn’t detract much from the value of the book.

In Essentialism, McKeown practices what he preaches, distilling the art and science of maximizing enjoyment of life down to its most elemental principles—and the principles down to their most fundamental formulations. Yet he gives up nothing in entertainment value. The book includes numerous true stories that demonstrate lessons in memorable ways.

If you’re interested in optimizing your life for peak performance, check out this invaluable resource.

View all posts by Jonathan Townley →
Heard the news about TOS-Con’s early-bird discounts?Why These Speakers at TOS-Con? (Part 2)
Return to Top