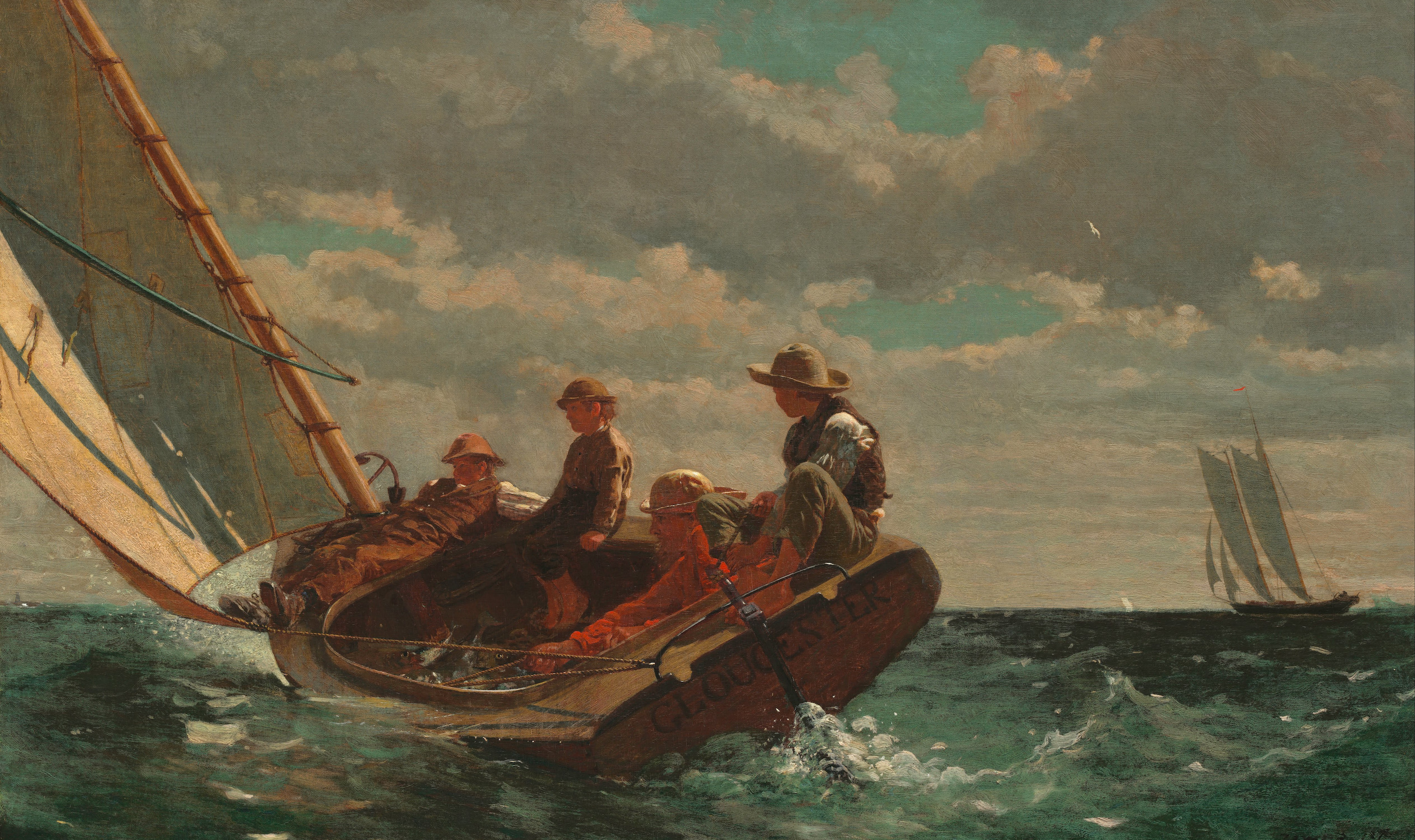 Breezing Up (A Fair Wind) by Winslow Homer
Arts & Culture

’Tis the Set of the Sail

But to every mind there openeth,
A way, and way, and away,
A high soul climbs the highway,
And the low soul gropes the low,
And in between on the misty flats,
The rest drift to and fro.

But to every man there openeth,
A high way and a low,
And every mind decideth,
The way his soul shall go.

One ship sails East,
And another West,
By the self-same winds that blow,
’Tis the set of the sails
And not the gales,
That tells the way we go.

Like the winds of the sea
Are the waves of time,
As we journey along through life,
’Tis the set of the soul,
That determines the goal,
And not the calm or the strife.

There are no beaten paths to Glory’s height,
There are no rules to compass greatness known;
Each for himself must cleave a path alone,
And press his own way forward in the fight.
Smooth is the way to ease and calm delight,
And soft the road Sloth chooseth for her own;
But he who craves the flower of life full-blown,
Must struggle up in all his armor dight!
What though the burden bear him sorely down
And crush to dust the mountain of his pride,
Oh, then, with strong heart let him still abide;
For rugged is the roadway to renown,
Nor may he hope to gain the envied crown,
Till he hath thrust the looming rocks aside.

Paul Laurence Dunbar (1872–1906) was an American poet, novelist, and playwright. A line from his poem “Sympathy” inspired the title of Maya Angelou’s autobiography, I Know Why the Caged Bird Sings.

You’ll never get anywhere,
Never do anything,
Never be any one much;
No honour or fame
Will accrue to your name,
You’ll never have wealth in your clutch,
Unless you go striving for,
Doggedly driving for,
Seeking the thing that you wish;
How do some guys
Manage to rise?
Take it from me, it’s
Ambish!

Although you have cleverness,
Brains and Ability,
Plenty of deftness and skill,
The thing that you need
If you hope to succeed
Is Courage and Power of Will;
Without pertinacity
All your capacity
Leaves you a failure, poor fish
How do the Great
Get to that State
I’ve got the Answer—
Ambish!

You’ll hear it called restlessness,
Wanton irreverence,
Discontent, lunacy, too,
But it is the force
That alters life’s course
And makes the world over anew;
The one irrepressible,
Strange and unguessable
Cosmic, unwavering Wish!
How did we climb
Out of the Slime?
You tell ’em, Buddy—
“Ambish!”

The Right to Die

I have no fancy for that ancient cant
That makes us masters of our destinies,
And not our lives, to hold or give them up
As will directs; I cannot, will not think
That men, the subtle worms, who plot and plan
And scheme and calculate with such shrewd wit,
Are such great blund’ring fools as not to know
When they have lived enough.
Men court not death
When there are sweets still left in life to taste.
Nor will a brave man choose to live when he,
Full deeply drunk of life, has reached the dregs,
And knows that now but bitterness remains.
He is the coward who, outfaced in this,
Fears the false goblins of another life.
I honor him who being much harassed
Drinks of sweet courage until drunk of it,
Then seizing Death, reluctant, by the hand,
Leaps with him, fearless, to eternal peace!

Full many a race is lost
Ere ever a step is run;
And many a coward fails
Ere ever his work’s begun.
Think big and your deeds will grow,
Think small and you’ll fall behind,
Think that you can and you will;
It’s all in the state of mind.

If you think you’re outclassed, you are,
You’ve got to think high to rise,
You’ve got to be sure of yourself before
You can ever win a prize.
Life’s battles don’t always go
To the stronger or faster man,
But sooner or later, the man who wins,
Is the fellow who thinks he can.

Walter Wintle is a poet who lived in the late 19th and early 20th centuries. Little is known about his life, and his name may be a pseudonym.

The Will to Win

If you want a thing bad enough
To go out and fight for it,
Work day and night for it,
Give up your time and your peace and your sleep for it,
If only desire of it
Makes you quite mad enough
Never to tire of it,
Makes you hold all other things tawdry and cheap for it,
If life seems all empty and useless without it
And all that you scheme and you dream is about it,
If gladly you’ll sweat for it,
Fret for it,
Plan for it,
Lose all your terror of God or man for it,
If you’ll simply go after that thing that you want
With all your capacity,
Strength, and sagacity,
Faith, hope, and confidence, stern pertinacity,
If neither cold poverty, famished and gaunt,
Nor sickness nor pain
Of body and brain
Can turn you away from the thing that you want,
If dogged and grim you besiege and beset it,
You’ll get it.

There is no chance, no destiny, no fate,
Can circumvent or hinder or control
The firm resolve of a determined soul.
Gifts count for nothing; will alone is great;
All things give way before it, soon or late.
What obstacle can stay the mighty force
Of the sea-seeking river in its course,
Or cause the ascending orb of day to wait?
Each well-born soul must win what it deserves.
Let the fool prate of luck. The fortunate
Is he whose earnest purpose never swerves,
Whose slightest action or inaction serves
The one great aim. Why, even Death stands still,
And waits an hour sometimes for such a will.

View all posts by Various Authors →
Letter to the Editor: A Strategy for Saving AmericaTal Tsfany on the State and Future of the Ayn Rand Institute
Return to Top