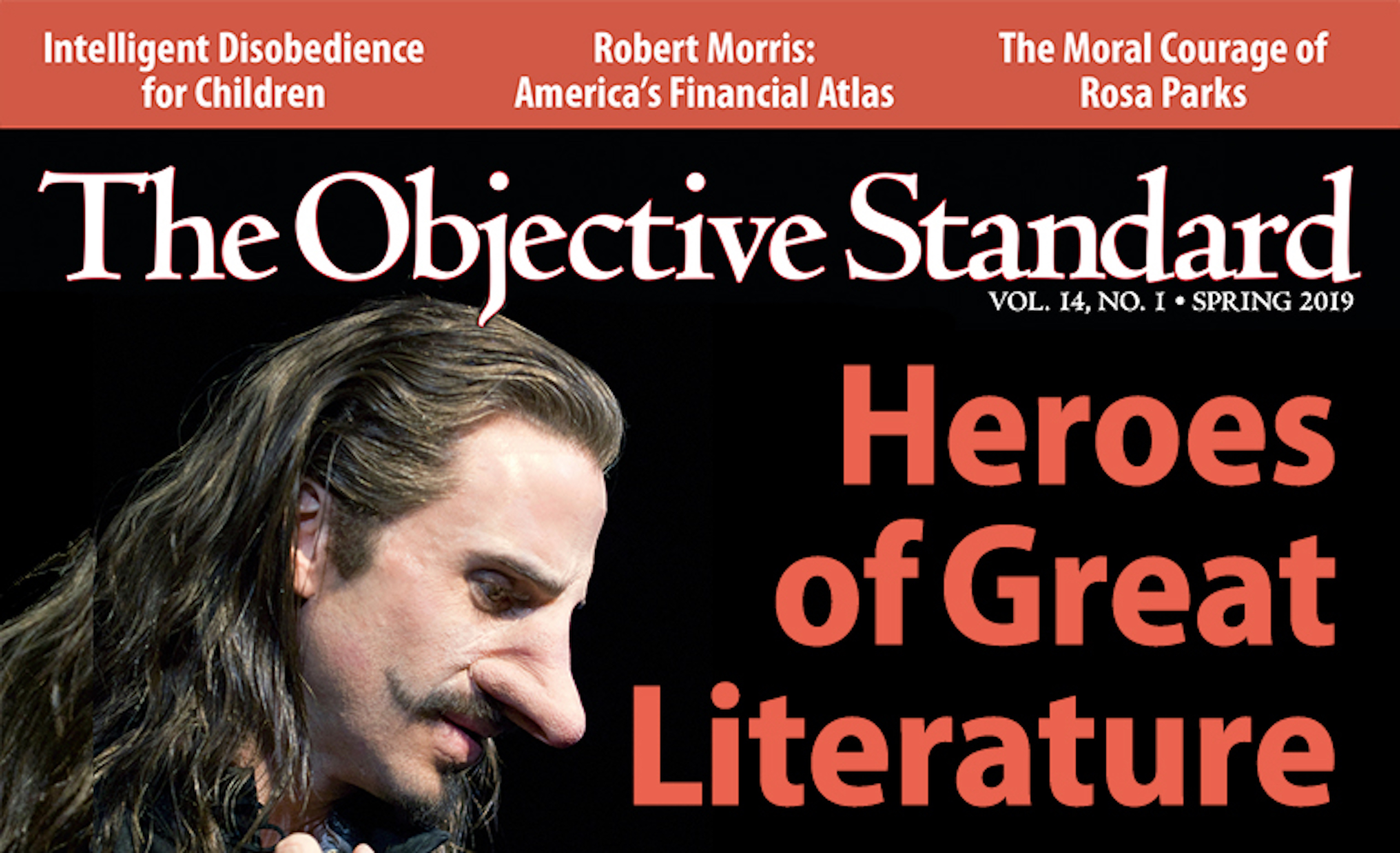 Welcome to the Spring 2019 issue of The Objective Standard. This issue begins our fourteenth year of publication, and I want to begin by thanking you—our subscribers and donors—for making possible not only the production of this vital journal, but everything TOS does. Without your business and support, this independent voice of reason simply would not exist.

So, from everyone at TOS to all of you who support what we do, thank you!

First up in this issue is “Heroes of Great Literature,” in which Andrew Bernstein zeroes in on the essential, distinguishing characteristics of heroes, and then, using these criteria, examines and compares five protagonists: Odysseus from Homer’s epic poem The Odyssey; Cyrano de Bergerac from Edmond Rostand’s play by that name; Thomas Stockmann from Henrik Ibsen’s play An Enemy of the People; Shane from Jack Schaefer’s novel of that name; and Howard Roark from Ayn Rand’s novel The Fountainhead. If you appreciate heroes, you’re in for a treat.

Next is a special feature (and, in the print edition, a tear-out handbook), “Intelligent Disobedience for Children: A Handbook for Parents and Caregivers,” by Ira Chaleff. You may recall that I reviewed Chaleff’s book, Intelligent Disobedience: Doing Right When What You’re Told to Do Is Wrong, in the Winter 2017 issue of TOS. Since then, Chaleff has applied principles from that book to the problem of trusted adults—such as relatives, priests, teachers, or coaches—molesting or otherwise abusing children. The workbook is designed to teach children about intelligent disobedience and to provide them with a protective tool for use in the event that an adult takes inappropriate actions or makes inappropriate requests. That tool, in essence, is the child’s own independent judgment combined with a mnemonic to help him employ and voice it. If you have children, or care for children, or know people who do, please check out this workbook and share it. It could avert unspeakable abuses.

In “Marva Collins, Her Method, and Her ‘Philosophy for Living’,” Carrie-Ann Biondi tells the remarkable story of how this heroic woman helped thousands of students who had been written off as “unteachable” to learn deeply, develop their minds, and lead meaningful, productive lives.

Next, in “Liberty: What Is It? Why Is It Good? On What Does It Depend?,” Carl Barney and I provide a brief introduction to Ayn Rand’s views on liberty and how they differ from conventional views. We wrote this article initially as a pamphlet for distribution at Students for Liberty conferences, and we hope you find it clarifying and useful. If so, please share it widely. The pamphlet is available as a PDF, linked atop the online version of this article, for ease of distribution.

In “Four Fallacies Regarding the Political Spectrum,” I consider ways in which enemies of capitalism, as well as some mistaken advocates of capitalism, misconceptualize the political spectrum in ways that harm the cause of freedom.

In “The Moral Courage of Rosa Parks,” Jon Hersey tells “the rest of the story,” as Paul Harvey would say, surrounding Parks’s seminal refusal to give her seat to a white man on a public bus. (This one brought my wife to tears, so be advised.)

Next, in “Tal Tsfany on the State and Future of the Ayn Rand Institute,” Tsfany reports on his first eight months as president and CEO of ARI and his plans for the future of the organization.

The final feature item in this issue is a compilation of “Seven Poems Celebrating Free Will” by various authors (compiled by Sarah Biddle). These gems are spiritual fuel for adults and children. Enjoy!

Books reviewed in this issue are:

Finally, if you’ve not yet registered for TOS-Con 2019: Philosophy for Freedom and Flourishing, be sure to reserve your spot soon! This year’s conference will be in Park City, Utah, and speakers include:

Sharpen your mind. Fuel your soul. Excel in life. Fight for liberty. If those are your goals, this conference is for you!

It will be the most life-enhancing conference of the year. I hope to see you there. —Craig Biddle